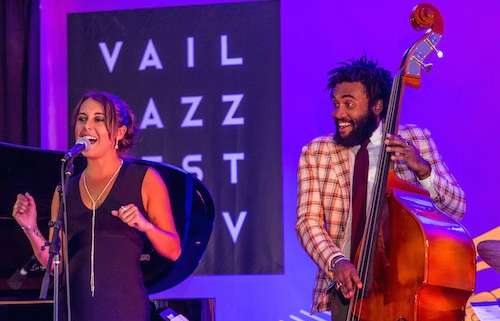 If you think it’s an exaggeration to say that a talented singer’s vocal chords can do acrobatics, you have not heard Veronica Swift. Yet, the 25-year-old rising jazz star does not describe herself as a vocal acrobat. She doesn’t even refer to herself as a singer or a musician.

“What am I? I’m a storyteller,” she says. “A jazz singer is a storyteller. I aim to put the music and lyrics in perfect marriage. I have to sing lyrics that will apply to a large range of ages and races. That’s what jazz does.”

Hailing from Charlottesville, VA and now residing in New York City, Swift returns to Vail with the Emmet Cohen Trio just before the release of her Mack Avenue Records debut album, Confessions, on which she belts forth creative interpretations of obscure gems (eg:“Gypsy in My Soul” ) with the accompaniment of the Emmet Cohen Trio as well as the acclaimed Benny Green Trio.

In her young career, Swift’s vocal skills have also landed her gigs as a featured vocalist with the likes of Wynton Marsalis, Chris Botti and Michael Feinstein. Inspired by singers and strong musical personalities ranging from Anita O’Day to Lady Gaga and Marilyn Manson, Swift’s earliest influences were her talented parents.

An only child, Swift began performing with her father, the late jazz pianist Hod O’Brien, and her mother, singer Stephanie Nakasian, before she reached double digits. Playing the piano and the trumpet from a young age, music has always been second nature to Swift.

“My first serious instrument was trumpet. I was playing trumpet before I was singing jazz. I played the piano. I marched drum corps. I was always. I played in the all-state orchestra. There wasn’t ever a certain sense of duty,” Swift says. “I was always surrounded by some of the greatest legends of jazz, getting bootleg recordings, here in this environment. It wasn’t until I guess, high school, even though I’d been touring already at that point, where I felt a purpose. Until then, it was more like speaking a language, like speaking English … something I did without thinking.”

By the time she was 10, Swift was recording with and sharing the stage with saxophonist Richie Cole and at age 11, landing a spot in the Women in Jazz series at Lincoln Center.

She attended the Frost School of Music at the University of Miami and then landed second place in the prestigious Thelonious Monk Jazz Competition. Gaining quick traction in the jazz world, Swift has also dabbled in opera and theater … which brings us back to her aforementioned identity as a storyteller above all else.

“The more songs you know, the more vocabulary you have. I’m always learning songs and listening,” she says. “When I’m picking tunes, I’m always asking, ‘does this make sense with the story?’ I have a concept for every show. The story has to make sense. I like to mix it up between American Songbook and obscure tunes. It’s the lyrics that draw me in. It’s like poetry.”

Swift refers to the Emmet Cohen Trio, which is comprised of Emmet Cohen on piano, Russell Hall on bass and Kyle Poole on drums, as “the best young musicians on the scene today,” rife with elegance, sophistication and most importantly, spontaneity.

“People will say to us, ‘oh you’re born in the wrong era.’ We are the culmination of our ancestors and our peers. We are constantly learning from each other. They’re all such creative people and it’s inspiring to constantly be moving forward together,” Swift says.

Cohen, who returns to Vail on the heels of winning the prestigious Cole Porter Fellowship from the American Pianists Association, describes his trio’s role in the storytelling as “explorative.”

“We follow the energy of the room, that’s part of the magic of our presentation,” Cohen says. “We play in the style of all of our favorite bands, spanning a hundred years of jazz, from Jelly Roll, Fats Waller, Duke Ellington, to beboppers and some of our favorite, modern composers. We’ve taken a lot from the history of jazz and our own take on the way our music can be presented.”

Soaring vocalist Veronica Swift and The Emmet Cohen Trio (Emmet Cohen on piano, Russell Hall on bass and Kyle Poole on drums) deliver a pair of intimate solo performances at The Sonnenalp’s Ludwig’s Terrace on Wednesday, Aug. 7. Doors for the first seating open at 5 p.m. with performance beginning at 5:30 (get tickets here). Doors for the second seating are at 7:30 p.m. with music starting at 8 p.m. (get tickets here). Tickets at $40. Full dinner service is available, not included in ticket cost and a $30 per person food or beverage minimum applies.

Veronica Swift and the Emmet Cohen Trio take their musical stories up a few octaves at the Jazz Tent at Lionshead’s Vail Square at 6 p.m. on Thursday, Aug. 8. Tickets are $25 for general admission, $40 for preferred seat and $50 for premium seat. Beer, wine and cocktails are available for purchase. GET TICKETS HERE. 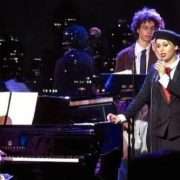 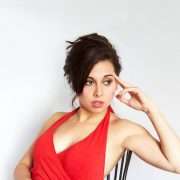 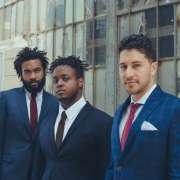 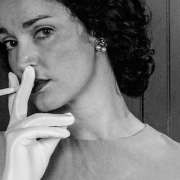 Howard Stone: I Did It My Way Scroll to top