“My goal is the emotional wellbeing of my audience. Every note that I play is aimed at  uplifting people. Every time I play I would like listeners to feel emotionally impacted, moved.”  Alto saxophonist Lakecia Benjamin knows that this attitude of positive connection sets her music apart. It’s no wonder then that her lingering memories of the 1999 Vail Jazz Workshop  are of elevation, encouragement, and inspiration. As she explained to Vail Jazz Foundation board  member JoAnn Hickey,

“I’m from New York City, which is crowded and fast paced. Before  Vail, I had never been on a plane and had never been to a place with clean air. In Vail, I stayed in  a house in the mountains. I didn’t have to think about food or money. The Workshop instructors made it so spiritually easy, emotionally easy. It’s amazing to get chances in life where there is  nothing to worry about other than the art.” 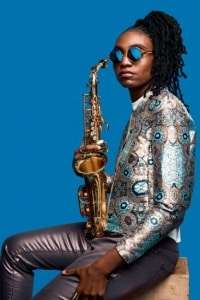 Of course, a tremendous amount of hard work goes into many easy-seeming projects.  That’s true of the effort it has taken to present the Vail Jazz Workshop every summer for the past  25 years. For instance, this year’s Workshop, involving 12 young musicians and a faculty of six  jazz professionals, took place over the internet.

Hard work exemplifies Benjamin’s career as well. Her drive, intensity, and commitment  to music have fueled her determination to carve a place for herself in the jazz world. That  perseverance paid off with the release this March of her third album, “Pursuance: The  Coltranes,” which has received glowing reviews from critics and fans alike.

Benjamin envisioned her homage to the legendary tenor saxophonist John Coltrane and  his pianist wife Alice as being enriched by vast range of jazz luminaries, each of whom had some  claim to the ‘Tranes. She doggedly enlisted a stellar, multigenerational assemblage of musicians,  including Coltrane contemporary Ron Carter, singer Dee Dee Bridgewater, rising players such as  singer Georgia Anne Muldrow and trumpeter Keyon Harrold, and avant-garde musicians Meshell Ndegeocello and Surya Botofasina.

Lakecia’s connection to the esteemed 82-year-old bassist Reggie Workman proved  fortuitous. Workman performed on numerous Coltrane albums; he also auditioned Benjamin for the jazz program at the New School University in New York City, where she studied. Workman  agreed to co-produce “Pursuance” and to share his extensive industry contacts with Lakecia.

Still, her vision for the lineup was sweeping and the logistics involved in getting 40 musicians into the studio was daunting. “When people said no,” she says, “I went to their houses.  I just kept hounding even up to the day of the recording. By August I realized I had all of these  people and needed to get on with the arranging. I did all of the writing on the piano. After two  weeks I called in the band.”

Stunningly, recording was completed over the course of just two 12-hour days. Why such  a grueling schedule? “It was about finances with a little bit of luck from God. Everyone was free  in those random days in August and they were also in New York. I didn’t have to fly anyone in.  A lot of factors worked in my favor. Being naive really helped each step of the way.”

From the get-go, Lakecia was keen on giving equal play to the music of Alice Coltrane. “Her music is so flexible,” Benjamin explains. “Some of it doesn’t even have drums. It’s like a  constant droning chant. It was easy for me to convey her spiritual message.” 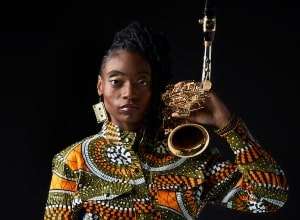 Lakecia Benjamin grew up in a Dominican neighborhood in New York city. Her home  was multi-generational and her exposure to musical genres diverse. Her musical heritage is  evident in her unique blend of Latin, fusion, hip hop, funk, soul…and of course, jazz.

Prior to releasing “Pursuance,” Benjamin recorded several albums and performed with  the likes of Stevie Wonder, Anita Baker, Alicia Keys, The Roots, and Macy Gray.  However, 2020 has been her year to shine. By an overwhelming margin, DownBeat  magazine’s Critics Poll named Benjamin the rising star on alto sax. “Pursuance” placed in the  same poll’s Album of the Year category, and Benjamin also placed as a Rising Star Arranger.  The Jazz Journalists Association named her Up and Coming Artist of the Year. And in its  November cover story, DownBeat featured Benjamin as one of “25 for the Future”—young  musicians “who have the potential to shape the direction of jazz in the decades to come.” Reflecting on her Vail Jazz Workshop experience, Lakecia recalls,

“What was interesting  to me was that the faculty brings all of these legends to life through their musical instruction. The  stories they had, the way they embraced life….to meet teachers that were friendly, open minded  and dedicated to the jazz lineage, inviting me to look them up when I got older – that doesn’t just  happen for young musicians. Now with my students, I see them as potential musicians I will  know for the rest of my life. How I make them feel, how I treat them they will never forget.”