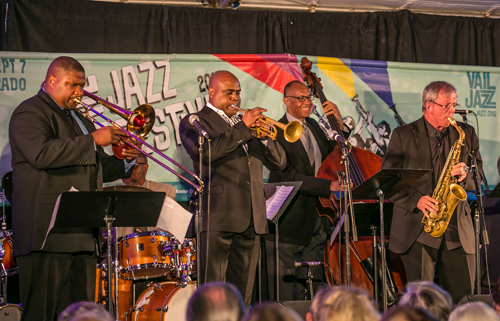 “There is no better audience than the Vail audience. You can hear a pin drop, they are listening so intently.” -Workshop piano instructor Bill Cunliffe

The musical experience in Lionshead on Thursday is as full-circle as it gets. The triple bill serves as the grand finale of the summer’s Vail Jazz @ Vail Square series but is also the mighty kickoff of The 22nd annual Vail Jazz Labor Day Weekend Party. It begins with 12 of the country’s top teenage jazz musicians, freshly minted “Vail Jazz All-Stars” having just graduated from a workshop with six of the world’s most respected and established jazz pros. A selection of Workshop alumni, now professional artists themselves, take the stage after the teenagers. The ultimate culmination of talent wraps up the evening with a performance by the mentors themselves, the Vail Jazz Party House Band.

“There is a healthy understanding of the importance of giving back, moving things forward and investing in the future,” says John Clayton, leader of the Vail Jazz Party House Band and Workshop. “The Vail Jazz Party has committed to simultaneously presenting first-class performances as well as being responsible for a high level of jazz education.”

Besides helping launch the inaugural Vail Jazz Party 22 years ago and the educational workshop a year later, Clayton’s repertoire of positive impact and star-mingling spans decades. Like the 250-plus students he has mentored in Vail (and thousands of others across the globe), Clayton tapped into his musical talent as a small child. By the time he was 16, he was playing bass at UCLA in a class taught by Ray Brown. In the 1970s, he joined the Monty Alexander Trio, then the Count Basie Orchestra before crossing the Atlantic to settle into a decade in Amsterdam as principal bassist for the Amsterdam Philharmonic Orchestra and instructor at Holland’s Royal Conservatory. He returned to California to juggle a number of successful touring ensembles, educational workshops and jazz festivals as well as arranging, conducting, performing and recording with a long list of big name artists. It was Clayton who arranged Whitney Houston’s rendition of “The Star Spangled Banner” at the 1990 Super Bowl. He has collaborated with Diana Krall, Natalie Cole and Whitney Houston. He won a GRAMMY for Instrumental Arrangement Accompanying Vocalist for Queen Latifah’s “I’m Gonna Live Til I Die” and seven additional nominations.

Regardless of which hat he’s wearing – be it composer, arranger, mentor, or performer – Clayton claims that the most rewarding interactions he has are the variety that confirm a powerful connection is made.

“When an audience member lets me know that my music touched them, made them feel great or made them cry, it makes me feel like I was successful in sharing my expression,” he says.
But Clayton’s certainly not the only member of the Vail Jazz Party House band who’s been places. New to the Vail Jazz Party House Band as of last year, saxophonist Dick Oatts has performed and recorded with an amazing array of stars, including Ella Fitzgerald, Sarah Vaughn and Mel Tormé. He is a former faculty member at the Manhattan School of Music and a professor alongside trumpeter Terell Stafford at Temple University.

Stafford is Director of Jazz Studies at Temple University in Philadelphia and leads his own quintet, which will perform this weekend in Vail. He’s performed and recorded with many GRAMMY winning artists, including Diana Krall, Bobby Watson and Herbie Mann.

A Vail Jazz Workshop mentor for many years, Stafford views the triple bill Vail Jazz Party kickoff performance as “a big reunion” and says that there is something unquestionably validating about such a “family affair.”

“One particular year, the parents of a student came up to me and let me know their son had a rough year and that the Vail Workshop was the highlight of his year. You always hear growing up that music is powerful and healing, not just from a listening standpoint, but from a mentoring one,” Stafford says.

Wycliffe Gordon, who has won Downbeat Magazine’s Critic’s Choice award for Best Trombone numerous times and has performed with the likes of Wynston Marsalis, Dizzy Gillespie and Tommy Flanagan describes the triple bill experience as “playing it forward.”

“It’s a great opportunity for us to meet the next bandleaders, composers, arrangers and conductors,” he says.

Not only are the students and musicians focused on the energy afoot when the Vail Jazz circle of past, present and future comes together, but the audience is completely enraptured.

“There is no better audience than the Vail audience. You can hear a pin drop, they are listening so intently,” says GRAMMY-winning composer and pianist Bill Cunliffe, who is a Professor of Music at California State University Fullerton and has shared the stage with Frank Sinatra, James Moody and Freddie Hubbard.

Lewis Nash, the most recorded jazz drummer of all time, has performed and recorded with everyone from Clark Terry to George Michael, Hank Jones to Bette Midler. He says he was once approached by a Vail fan who told him, “I never liked drum solos before hearing you play.”

Catch the triple bill of the past, present and future, featuring the Vail Jazz All-Stars, Alumni Quintet and House Band at Vail Jazz @ Vail Square from 6 to 8 p.m. Sept. 1 inside the all-weather jazz tent in Lionshead. General admission tickets are sold out but premium seating is $40 in advance. The All-Stars also perform FREE sets at Vail Square at 11:30 a.m. on Saturday and Sunday. For tickets or more information, visit vailjazz.org or call 888-VAIL-JAM.