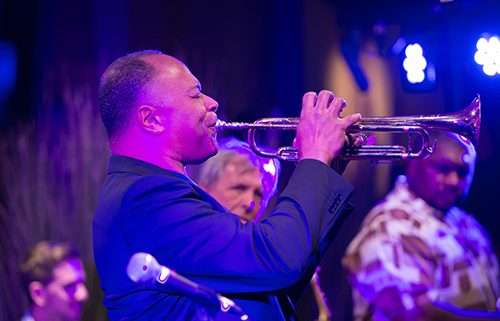 Herbie Hancock once famously said that “jazz translates the moment into a sense of inspiration for not only the musicians but for the listeners.” During the five days of live music throughout the Vail Jazz Party, all of the moments become a throbbing cloud of inspiration, palpable to all within earshot.

Spontaneity and improvisation are key ingredients to great jazz, a big part of why the world places jazz artists on the tippy top of the music’s overall talent pool.

In its 22nd year, the Vail Jazz Party exemplifies the skills of its musicians not only through its feature performances but also in grouping them together for a fusion experience that is truly one-of-a-kind, building ensembles that have never before come together and a live set that will never again be repeated.

While these primordial lineups and their consequent off-the-cuff musical masterpieces might look and sound natural to the artists, even the most established and experienced stars at the Vail Jazz Party will attest to the fact that improvising exquisitely is no simple task.

“That’s where I’m really clear that I’m the baby in the bunch,” says singer Niki Haris, leader of the Vail Jazz Party’s Gospel Prayer Meetin’, arguably the most popular performance of the entire weekend. Although the Gospel Prayer Meetin’ doesn’t necessarily fall under the “improvised” umbrella, Haris, like every other star with a feature performance during the weekend party, is once again slated to appear with a changing lineup of artists in a handful of breakout sessions. A long-time back-up vocalist for the likes of Madonna and Anita Baker, Haris is more accustomed to super-produced stadium shows with well-timed lighting and pyrotechnics than on-the-spot improv.

“Because of my history, I know how to put shows together. I know big productions. I know rehearsal. The closest I got to improv was in a church session,” Haris says. “You let the spirit move you – yours and the audiences – on what song you would choose. I’m not a pro at that. That’s where I tip my hat to those amazing musicians.”

Haris has managed to make a convincing case of improvising over the years at the Vail Jazz Party, largely because her expression, as she herself describes it, is “honest.” Like other artists at the jazz party, Haris is not only a jazz singer, but also wanders into the realms of gospel, soul, rock, pop, R&B, funk and just about every other genre you can put a label on. Regardless of the category, when she performs in Vail, particularly at the Gospel Prayer Meetin,’ her mission is to convey one thing  … “good news.”

“When I sing, I’m as honest as I can be, so it doesn’t come just from a place to sing a bunch of songs but to delve into where I want to be in the world,” she says. “For those 90 minutes, I want to create a more loving, compassionate and peaceful world, bringing the good news –  the gospel – to many different faiths. That’s the fun part of Vail. I know I have Christians there and people who probably don’t go to church. But it’s palpable, the energetic change that happens. People are reaching out hugging each other. I see tears, people hand-holding. Then to play in the square, with all of these mountains around, that’s the most beautiful thing.”

“I’m so glad I’m the one who gets to deliver the gift,” Haris says.

Step into a session

The Vail Jazz Party is designed to impart an armful of gifts all in one long block of back-to-back deliverables. When you buy a ticket to the party, it lands you three to five hours of music during a particular time slot Friday throughMonday.

The evening sessions are reminiscent of a traditional indoor stage performance in which the crowd collects in theater-style seats around a large stage with superb acoustics, in this case, in the Grand Ballroom at the Vail Marriott. As with all of the sessions, a selection of artists – the king or queen of his or her given instrument – are teamed up to kick off the session with one musician selected as leader of the set. Niki Haris gets an early crack as head honcho duringFriday’s first evening session. Each evening session also offers one if not two special performances, including a group of contemporary jazz stars paying homage to a musical legend as inspiring footage of the legend takes over the backdrop. The lineup includes supersonic bassist John Clayton paying homage to another master of four strings, Milt Hinton, a tribute to the Texas Tenors starring saxophonist Joel Frahm, Byron Stripling playing his heart out in tribute to the blues and Terell Stafford’s Brotherlee Love, a tribute to iconic trumpeter Lee Morgan. In true jazz club tradition, each evening finishes with a Late Night Jam Session, included with the evening ticket, in which a powerhouse ensemble of seven to eight musicians who have never played together are teamed up improv-style in the intimate setting of First Chair Café in the Vail Marriott. The unplanned music flows like liquid ear candy from around7 p.m. to well after midnight.

With the Rocky Mountains and blue sky as a backdrop, from 11:30 a.m. to early evening Saturday through Monday, the live soundtrack ranges from enchanting instrumental quintets to high-energy piano duos to small orchestra-sized teams of soloists. You name the instrument and one of the world’s leading masters is on the stage playing it – drums, bass, guitar, piano, trombone, clarinet, trumpet, flute, bass … The sets fuse two to 10 musicians at a time, each one bringing his or her own thick stack of accomplishments, many of them GRAMMY and Downbeat Music awards. Highlights include the Vail Jazz All-Stars free performances on Saturday and Sunday, Piano Duos in which six pianists rotate through a dueling set on the keys and an all-in, blowout set on Monday with a ten-piece horn section. The nonstop strains of hypnotizing harmonies originate from the all-weather jazz tent in Lionshead’s Vail Square.

All told, the Vail Jazz Party amounts to a five-day explosion of world-class live music, refined feature performances and unpredictable combinations all in rapid succession. The one predictable factor is that like any good party, it’s bound to bring a bounty of delightful surprises. Bill Cunliffe, multi-GRAMMY award-winning pianist of the Vail Jazz Party House Band sums up the experience like this:

“It merges musicians presenting their own original material but also thrown together in unexpected ways to see what happens,” he says. “You get a whole difference sense of what the musicians can do.”