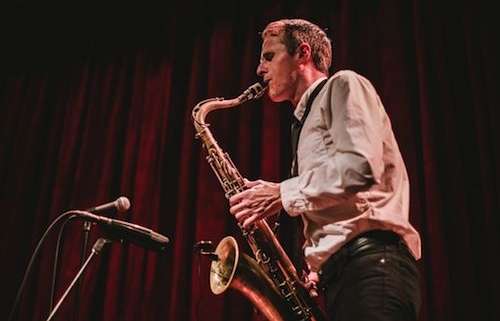 Neil Welch has always gravitated toward certain sounds. The most significant so far is that of the saxophone, which beckoned him when he saw and heard one up close for the first time during an elementary school assembly.

“When that group was performing they broke up into the audience and had students hold instruments,” Welch recalled in a recent phone interview with Vail Jazz Board member JoAnn Hickey. “I was seeing this glorious, shiny, sonically rich, expressive instrument being played right in front of me. In that moment I absolutely knew that I was going to play the saxophone.”

Welch ran home that day to inform his mother of this revelation. She told him he might have to wait until he had an opportunity later in school.

“I was a bit young to play it and my family didn’t have the means to get the instrument at that time. I truly believe I was called to it. Once I got the opportunity to sign up for band I was number one in line asking to play saxophone,” he said. 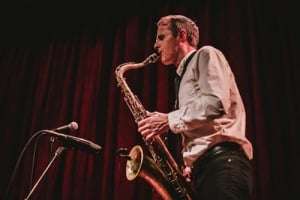 Thus, growing up going to a public school that offered a music program in the Pacific Northwest, Welch took up the sax in fifth grade and began exploring the depths of its sound. He joined the high school jazz band and began studying with professional, Seattle-area musicians like Jay Thomas, Hadley Caliman and Don Lanfear. His high school jazz band performed in the prestigious Essentially Ellington competition in New York. After winning a solo award, Welch received a call from Vail Jazz founder Howard Stone, asking if he’d be interested in attending the Vail Jazz Workshop, a 10-day intensive musical education that invites 12 of the nation’s most promising teenage musicians to learn the art of improvisation and playing by ear.

Although he “jumped at the opportunity,” he was immediately intimidated. This was 2003. Welch was 17.

“That was a challenge for me,” he said. “At that time I was doing my best to try and learn melodies, chords and to try and work with other musicians with an understanding that to play at professional levels you really don’t often have music in front of you. You need to know a repertoire of music in order to be able to communicate with one another at that high level. That was the first time playing without written music had been expected of me. To be honest, I distinctly remember being pretty terrified heading there.”

Upon arriving in Vail and hearing the talent of his fellow students, he was additionally unnerved by a sensation that his own talent did not measure up. He leapt these hurdles by the time the workshop wrapped up, buoyed by his newly discovered skill set and the thrill of connecting with other musicians.

“What I distinctly remember is that when I walked away from the camp I had performed, socialized, communed with people through music in a way that felt closer to what jazz music, as it had been formally described to me, could actually be like,” he said.

This is an approach he’d take through college, when he was drawn to world music and specifically, the Indian sitar. Welch began studying traditional Hindustani music with sitar master Pandit Debi Prasad Chatterjee. He said this experience, like studying with great saxophonists and trumpeters, opened his eyes to how devotion to a craft’s specific forms can “build a culture around it” and “shape the culture.”

“It was through Pandit Chatterjee that I was able to tie a lot of different elements together in a musical study that had previously been mysterious to me,” Welch said. “I realized what was possible in a field completely different from my own. He was able to find entry points to bring me into it, despite the fact that I had no upbringing in it, very few cultural ties to Indian music or Indian culture. The study with Pandit Chatterjee and great jazz musicians in Seattle, eventually – in a bizarre, roundabout way – helped open my spirit, open my ears and my mind towards collaboration and hearing specific sounds and forms. When I became more interested in abstract music it actually felt a lot more comfortable trying to find entry points into abstraction to study and also bring others into the fold who hopefully would want to listen to the music and enjoy it, too.”

Now, the saxophonist is drawn to abstract sound in abstract locations. He records solo compositions in unusual places, including parking garages, remote mountain and desert locations and even a World War II fallout shelter. He co-founded Seattle’s famed creative music series Racer Sessions, is co-director of the Seattle Saxophone Institute, has released six solo albums, is a highly sought instructor and collaborates with as many musicians as possible from a variety of backgrounds. He credits the Vail Jazz Workshop with instilling the confidence he needed to embark on this unique lifelong musical journey.

“I feel at that point in my life I was really on the edge,” he said. “I knew music was going to be in my life. I knew the saxophone was going to be my life, but at that time I felt more confident going into education than playing. What I didn’t really understand at that time is that you can have both, and there are different ways to go about that.”