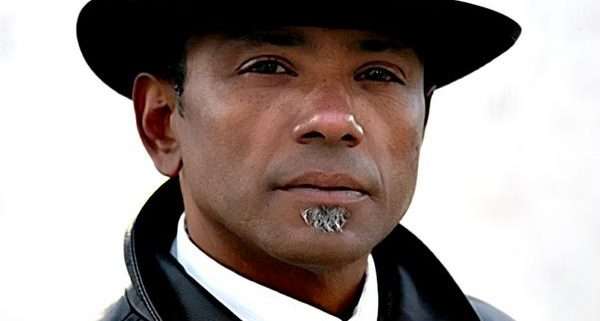 How a cruel speech therapist, a hurricane and a stalker helps John Boutté bring tears of joy to his audiences.

There’s a tropical storm ripping through Louisiana and John Boutté is watching the towering, 200-year-old trees blow and sway on his new property outside of New Orleans.

“Man, I’m so fortunate,” he says during a phone interview in June, his voice fading in and out with the gusts. “This is what I hear, the sounds of oaks rustling. It’s incredible. I never hear any sirens. I don’t hear bullets anymore.”

Besides all of his time on the road touring the world and the stint he spent serving as a U.S. Army Officer, Boutté has spent nearly all of his 58 years in New Orleans. Two years ago he moved away from the downtown home next door to the one he grew up in and relocated to the countryside.

“It’s 23 acres of pine trees, magnolias, white oaks … it’s a beautiful forest. The house is only about 800 square feet. This used to be a golf course,” he explains. “When I tell my friends I bought a golf course, I say, ‘Man, don’t look at me like I’m Donald Trump.”

Boutté grew up in a family of 10, loving music as early as he can remember. His first instrument was his aunt’s antique cornet he received when he was 8. He recalls asking his mother about it and being frustrated, because he struggled to pronounce “Rs,” and thought she’d misunderstood him.

“I remember my mom was at the stove. She had my baby brother in her arms, my baby sister pulling on one leg and I was pulling on the other. So here I am hollerin’ ‘Mamoo has a cornet,’ and she said, ‘Mamoo doesn’t have a clarinet.’ I stormed away. But the next morning before I went to school, she had it waiting for me. That was the beginning of my musical career,” Boutté says.

He was reading music shortly thereafter, then playing in marching bands, singing in choirs, starting a capella groups, performing in street bands and winning talent shows. His trajectory did, however, encounter a blip during his teenage years.

“I feel like I won a lottery for how great my childhood was. But at 17, I had a speech therapist who told me there was something wrong with my voice because it was so high,” Boutté recalls. “He said, ‘you sound like a girl.’ It broke my heart. It threw me off; I wasn’t singing for about a year. It was a wakeup call to me that that sometimes you’re going to have some real a—hole people you have to deal with in life. In one fell swoop, this guy knocked the confidence right out of me.”

Eventually, the confidence came stomping back. Boutté began singing again and then soaring. His professional recording career has led to 10 albums and collaborations with everyone from Herbie Hancock and Paul Sanchez to Galactic and Todd Rungren. His voice has been admired by the likes of Mel Torme and Stevie Wonder. He created the theme song for the hit HBO series, Treme, and the series keeps coming back with more song and appearance requests.

If only that speech therapist could see him now.

“I would love to see the look on his face,” Boutté admits. “I’ve always loved to sing. I’ve been lucky to work with some of the most incredible jazz musicians in New Orleans, the second generation of jazz cats, the third generations of jazz cats, I grew up around them. To be in that circle, I lucked out. I got schooled by a lot of them. You never think of yourself as good. You see so much talent around you.”

Half-jokingly, Boutté goes onto say he didn’t realize he had anything going for him until about three years ago.

“I realized I really knew I had something, when it was something I didn’t want … when I got my first bonafide stalker,” he says.

This is no joke. Somehow a misguided fan began sending Boutte strange gifts although he has no idea how she got his address and calling him “at all times of the night,” though he doesn’t know how she got his phone number.

He eventually filed a restraining order. Although he is still recovering from the emotional drain of the experience, he feels he is better equipped to deal with unpleasant situations after losing most of his treasured possessions – including that first antique cornet – during Hurricane Katrina. He says the hurricane has instilled in him a live-for-the-moment approach to life that he refers to as “the Katrina mentality.”

“With all of my travel, the gain, the loss, knowing I’m in a world that can turn on a dime at any moment, all of those experiences have left a reservoir of emotions that I can tap into,” he says.

Not only do the floodgates open for Boutté every time he steps onto a stage, but for his audiences, too.

“One time after singing Annie Lennox’s ‘Why,’ I looked out at the audience. Man, when I opened up my eyes, all the ladies were crying. All the guys were crying. Kids were crying,” he says. “I do touch a lot of people, man.”

Don’t miss John Boutté’s Vail debut on July 10 when he performs From Bridge Street to Bourbon Street at The Sebastian in Vail with a select ensemble of Vail Jazz Workshop Alumni. Cocktails and appetizers begin at 6 p.m. followed by dinner and silent auction at 7 p.m. and music at 8 p.m. For tickets or more information, visit From Bridge Street to Bourbon Street or call 888-VAIL-JAM

Boogie in the Barrelhouses of the Texas Backwoods Scroll to top