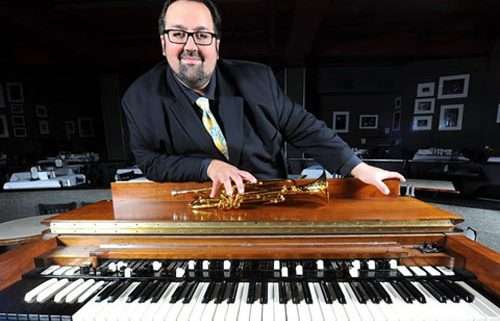 From gigging with his father at age 5 to touring with Miles Davis as a teen, Joey DeFrancesco is maintaining his breakneck pace

This is a story of love at first sight.

From the moment Joey DeFrancesco first laid eyes on the Hammond B3 organ, he had hearts in his pupils.

A Philadelphia native raised in a musical family that included his father, Oklahoma Jazz Hall of Famer John DeFrancesco, Joey remembers those days as a toddler vividly.

A year or two later, Joey was joining his father at gigs.

“He was very helpful guiding me along, showing me how to set it up, but he let me do my thing,” Joey says. “I had no pressure at all. My first time playing live, I’d sit in with his bands. There would be a tune and he’d show me a couple chords, but he let me be free. If he thought I wasn’t doing something right, he’d pull my coat. It was my favorite toy. It still is.”

Now at the age of 46, Francesco has 30 albums under his belt and is widely recognized as one of the world’s pre-eminent masters of the B3 organ. He has of course, picked up other skills – and loves – along the way.

“I started tinkering around as a trumpet player as a result of playing with Miles Davis and hearing him play,” DeFrancesco says. “When you hear that sound in front of you one day after another, you get inspired.”

Miles Davis handpicked DeFrancesco to share the stage with him when DeFrancesco was only 17, among the youngest musicians to ever perform with the late, great bandleader.

“It was a TV show in Philly. He heard me on there and he asked for my number. The rest was history,” DeFrancesco says. “It doesn’t feel like that long ago, but it’s 29 years ago and here we are today. When I look back on those things, they’re great. They’re wonderful, great memories, but all that is part of what I’m doing now. The sound of my bands, of the music I write, you just grow and grow and grow.”

“It’s pretty self-explanatory,” he says of the record. “It’s unifying. There’s a song called ‘Unifier,’ but that’s what the whole thing is about … unifying all of us through freedom of music.”

In addition to playing the B3 organ and keyboards throughout the record, DeFrancesco’s trumpet-playing prowess is featured on the song, “One,” and frequently on stage, when every one of his limbs is deftly keeping its own rhythm.

“When you’re playing the organ, you’re basically playing two instruments,” he says. “We don’t have a bass player. I’m playing the bass lines with one foot, then I’m playing single note solos. If my right hand is playing the trumpet, it’s not that different than what my right hand is already doing. Once you’re doing that for a while with your left hand and foot going, luckily they all hit the right notes.”

Even as all of his digits are tirelessly engaged on the organ and/or trumpet and keyboard, DeFrancesco’s head is on a swivel as he performs, most often smiling and laughing with his band mates, drummer Jason Brown, guitarist Dan Wilson and tenor saxophone player Troy Roberts.

“These guys are such wonderful players,” DeFrancesco says. “Everyone has their own music they listen to and bring in to the sound. The camaraderie is great. We have fun, which is really important. On the bandstand, we’re creating. It’s a natural thing to enjoy it. We’re not having fun because we’re entertaining an audience. It’s because we love the sounds we’re making.”

Don’t miss two-time Grammy nominee and B3 master Joey DeFrancesco and The People at 6 p.m. Aug. 24 in Vail Square. General admission tickets are $25, preferred seats $40 and premium seats $50. Presented by The Jazz Cruise and Blue Note at Sea, Vail Jazz @ Vail Square takes place every Thursday evening through Aug. 24 in the all-weather Jazz Tent in The Arrabelle courtyard in Lionshead. Drinks are available for purchase.

For tickets or more information call 888-VAIL-JAM or click here:

Jimmy and the Beast

Young musical talent is about to be amplified Scroll to top