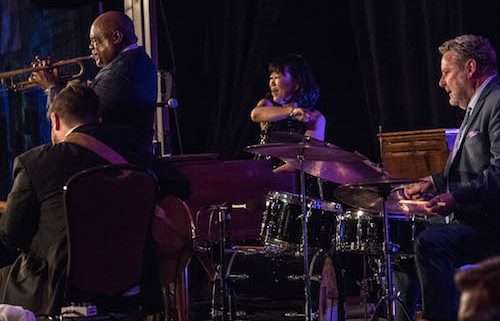 Take it from a world-class organist, drummer and guitarist … the jazz miracle doesn’t happen every day

Akiko Tsuruga likens the feeling of perfect musical chemistry to a heavenly experience in the beauty salon.

“Sometimes the person cutting my hair is so nervous. They’ve never cut Asian hair and they don’t know what to do and it makes me nervous. But sometimes it feels so great. They wash my hair and give me a massage and I don’t have to do anything. I don’t have to worry about anything. I feel like I’m in heaven. It’s the same with musicians.”

The Japanese B3 organ player experiences this salon-style luxury every time she takes the stage with drummer Jeff Hamilton and guitarist Graham Dechter, with whom she recorded the live album, 2017’s So Cute, So Bad, which was streamed from New York’s Lincoln Center.

“Both of them are geniuses,” says Tsuruga, who has shared the stage with many of jazz’s top international artists and was named 2017 Best Jazz Organ by Hot House Magazine. “Every time I play with them or I listen to them playing, I feel like God gave them special talent. I respect them so much. Their rhythm is so driving. When we play together, it’s chemistry. It’s just fun. My brain, my whole body are so full of heart. I feel full joy.”

Hamilton and Dechter describe the trio’s dynamic in similar words.

“We have A LOT of fun while playing together,” Dechter says. “Jeff Hamilton talks about musicians who are ‘serious about what they do, but don’t take themselves too seriously.’ Being that all of us come from that mindset, it definitely creates a serious yet joyful vibe.”

Widely considered one of the greatest jazz drummers of the modern age, Hamilton mentored Dechter and has performed or recorded with some of the biggest names in music, from Ella Fitzgerald to Diana Krall, Barbara Streisand to Mel Tormé. But sometimes when a combo clicks, it truly locks. Such was the case between Hamilton and Tsuruga, whom were first brought together by Vail Jazz founder Howard Stone.

Tsuruga has a clear recollection of Stone’s phone call after the first time he saw her perform many years ago.

“He called me and said, ‘I have a really good drummer for you.’ I asked him who and he said Jeff Hamilton. I said, ‘wow.’” Tsuruga recalls.

Within the first seconds of their first performance together at the Vail Jazz Festival, the lock was sealed.

“In the first eight measures, Akiko and I looked at each other. We were both thinking, ‘uh oh … we have something really special here,’” Hamilton says, adding that Dechter finishes the package to a T. “I think Graham is one of the greatest improvisers going today. I’ve played with great guitarists in my day and have a pretty high standard. I knew he’d be the perfect fit.”

The joy the three find together is obvious when they perform, each one wearing an ear-to-ear smile and a joy so thick it forms a palpable aura.

“I believe that it’s a combination of getting along together both on and off the bandstand. Jeff, Akiko and I come from very similar places in terms of how we hear and feel music but we also share many common traits outside of music – food, wine, humor …You can put three great musicians together but if they don’t jive well as people, it’s very difficult for the music to reach that next level,” Dechter says, agreeing with Tsuruga that his bandmates’ talent appears effortless.

“Jeff and Akiko both play instruments that require so much coordination and independence, both physically and mentally, yet they make it look so easy,” he says. “It’s something I’m always aspiring to in my own playing – playing something incredibly complicated and making it look simple.”

A skillful ear and a solid background of sacrifice are also key ingredients to amazing musical chemistry, according to Hamilton.

“Hearing the music the same so you have that common language makes it easier to play together,” the drummer says. “The determination and the sacrifice from a young age are a big part of it … not being able to play baseball when you’re 10 years old because you have to practice, in some cases relationships throughout your life, in the jazz world … there are sacrifices you have to make to do it properly.”

Also, these artists certainly don’t forget that the winning mix can’t be made without a generous dash or three of love.

“I have been thinking, what is chemistry? I have been living in New York and there are so many good musicians here, so many great musicians, but nobody like Jeff and Graham. They are so loveable. They have so much love,” Tsuruga says.

Don’t miss the magical musical force that is Akiko Tsuruga, Jeff Hamilton and Graham Dechter. The trio closes out the 2018 Vail Jazz @ Vail Square season at 6 p.m. Aug. 23 in the all-weather jazz tent at Vail Square in Lionshead. Tickets are $25 for general admission, $40 for preferred seating and $50 for premium seats. Beer, wine and cocktails are available for purchase. 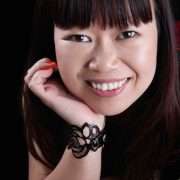 Inside the Vail Jazz Festival: The Joy of Discovering Akiko

Inside the Vail Jazz Festival: The Joy of Discovering Akiko