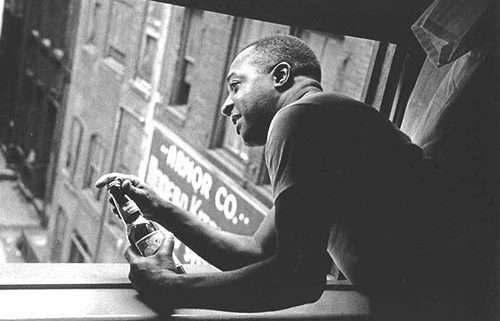 The Judge, as he was known, never went to law school, and he never took the bar exam. In fact, he never practiced law. What he practiced was music.

Milton John “Milt” Hinton was born on June 23, 1910 in Vicksburg, Miss. to African American parents who separated when he was an infant. His maternal grandmother had been a slave and when he was 8 he came upon a lynching. The vivid images of a black man “on fire, like a piece of bacon with a wire rope around his neck” would remain with him for the rest of his life.

At 9, Milt moved to Chicago and at 13 he began playing violin, but he switched to the tuba so he could be part of his high school’s marching band because it gave a boy with a name like Milton who was really skinny and carried a violin around all day a better chance with the girls. He switched once again to the acoustic bass and though largely self-taught, became a professional bassist upon graduation.

In 1929 the bass was beginning to replace the tuba as the “time keeper” in jazz and it was rarely featured in a solo. Milt would change all of that during the next seven decades as he became the undeniable dean of jazz bassists and one of the most beloved figures in the history jazz.

In 1936 he began a 15-year long association with Cab Calloway, becoming a featured soloist with the band and by 1951-52 Milt had embarked upon a new phase of his career playing with the who’s who of jazz giants such as: Louis Armstrong, Count Basie, Duke Ellington, Dizzy Gillespie, Benny Goodman and Billie Holiday and many more. In the world of popular music he played with Bing Crosby, Bobby Darin, Aretha Franklin, Johnny Mathis, Frank Sinatra, Barbra Streisand, Bette Midler and Paul McCartney. Also playing on early rock ‘n’ roll hits by The Coasters and The Drifters. In all, Milt was one of the most prolific musicians of the 20th century, playing on over 1,100 recordings.

His easygoing nature, graciousness, humility, willingness to musically complement other players, professionalism, flexibility and most importantly his “chops” on the bass – impeccable time and splendid intonation – propelled him in a career unmatched by any jazz musician in the history of the music.

He broke down racial barriers as he was one of the first African American musicians to be employed as a studio musician in New York City through the help of his friend comedian Jackie Gleason, who was then recording orchestral music. As luck would have it, Milt bumped into Jackie on a street in NY in 1953 and Jackie hired Milt on the spot for a recording session the next day. When told that a white bassist had already been hired for the session, Jackie said: “Well, now we have two.”

That was the beginning of a long and illustrious career as a studio musician and in radio and TV work. In the 1960s he began to play the “jazz party” circuit and was a regular performer in Colorado at the Dick Gibson Jazz Party for several decades where he always sang his theme song “Old Man Time.”

Milt had a generosity of spirit that matched his prodigious musical talent and it was demonstrated by selfless commitment to others, both as a mentor and a teacher. In the 1970s and 1980s he taught jazz at several colleges and established a scholarship fund for young bassists. His commitment to jazz and others was recognized with the bestowing of numerous awards, including the Jazz Master’s Award from the NEA and the receipt of 8 honorary doctorate degrees from major universities.

They say that behind every great man there is a great woman and Milt was no exception. Mona Clayton Hinton was Milt’s partner for 57 years. They were inseparable and Mona traveled extensively with Milt and successfully oversaw and managed his career.

Milt’s accomplishments as a musician, educator and mentor cannot be adequately chronicled here because of space limitations, but there is another facet to Milt’s talent that needs to be acknowledged and that is his parallel career as a photographer. Beginning as a hobby at 25, Milt became infatuated with photographing the “jazz life” – the everyday experience of jazz musicians – and for the next 60 years he captured in 60,000 images a monumental photographic record of jazz history and a changing America from the time when black musicians ate at “colored only” restaurants in the South to a time when jazz musicians led the way to an integrated society. Two books of his photographs and stories have been published and multiple exhibits of his photographs have been presented worldwide. After Milt’s passing in 2000 at the age of 90, a wonderful documentary film, “Keeping Time: The Life, Music & Photographs of Milt Hinton,” was made and has played at film festivals in the US and Europe to great acclaim.

So how did Milt become The Judge? Some say his colleagues pinned the name on him because of his requirement that they be on time to performances and recording dates, while others say it was instead his punctuality, since he was always the first to arrive and the other musicians would greet him with an old joke’s punch line, “Well, good morning, Judge!” The most likely explanation is because he was the ultimate time keeper.

As part of the 22nd Annual Vail Jazz Festival, we will celebrate the life of Milt Hinton by: presenting a digital exhibit of his photos at the Lionshead Welcome Center through Sept. 5 at 10 a.m., 12 p.m., 3 p.m. and 6 p.m. daily and screening the documentary film “Keeping Time” on Sept. 2 at 2 p.m. followed by John Clayton’s Multi-Media Tribute to Milt at 8:10 p.m.