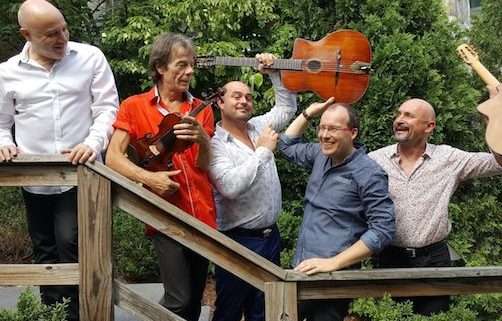 Samson Schmitt was playing guitar before most toddlers knew how to bounce a ball. Hailing from the Moselle region of eastern France, Schmitt’s father, Dorado Schmitt, introduced his son to the music of Django Reinhardt and had him noodling on the neck of a guitar when he was just 3 years old. Schmitt names his father as the “master” of his musical education. He concedes that Dorado taught him “the necessary basics to play gypsy jazz” but “then later told me that I had to find my style of music with a personal touch.”

Today, the refined embodiment of gypsy jazz with a personal touch – not just Schmitt’s but each of his band mate’s – is the Django Festival All-Stars.

Comprised of Schmitt and DouDou Cuillerier on guitar, Antonio Licusati on bass, Pierre Blanchard on violin and Ludovic Beier on accordion, the All-Stars deliver a romping, high-energy blast of gypsy jazz. They play Django Reinhart classics as well as original compositions and countless surprises with what Schmitt describes as a “chemistry” that “has grown over the years to be fantastic.”

Beier, who grew up in Paris among a family of musicians and gravitated to the accordion after first learning the keyboard and drums, insists that the All-Stars’ chemistry is “not a rational fact.”

“Sometimes the magic appears without explanation,” he says. “The alchemy sometimes between musicians can create extraordinary things, and that’s the case in our group. But one of the keys of that is the listening. Everyone has a role and a precise function that blends the music without interfering with ego. When all those facts are put together, it works. And of course the friendship and common passion for this music is very important.”

The passion is tangible. During an All-Stars performance, each musician attacks his instrument with a ravenous but precise force that Schmitt claims is possible only by understanding three key ingredients – “heart, sensitivity and energy.”

That said, playing music in the Django tradition is not something just anyone can do.

“Besides virtuosity, harmony and swing, which are the ‘technical’ skills to master, I can clearly identify the most challenging aspect as the respect of the tradition with a kind of ‘opening’ on something from our modern times. Tradition is so inclusive that you cannot change the basics of this music, but adding new influences from the years after Django, you can make a creative answer to Django’s legacy.”

According to the accordionist, this is why gypsy jazz is so popular not only in France but throughout the world, among people of all ages who love every genre of music. But the genre wasn’t so popular when he first discovered it in the 1980s, when new music was largely electronic-based pop.

“But in the late ‘90s the appeal for world music revealed the Django legacy to the public and became popular among all kinds of people from young heavy-metal fans to white-collars businessmen,” Beier says, adding that in France today, Gypsy jazz is one of “the strongest” forms of music.

Beier began playing with Schmitt when the guitarist was still performing with his father and the two bonded immediately when it was clear that they both relished what Beier calls “the new side of Django’s music.” They have been playing together as the Django Festival All-Stars for 16 years.

“We have plenty of music to share from fast tempos to lyric ballads,” Beier says. “I need to keep the surprises for the concert, but our music is easy to understand and brings a lot of happiness.”

The quintet returns to Vail with a pair of intimate performances at The Sonnenalp’s Ludwig’s Terrace on Wednesday, July 18. Doors for the first seating open at 5 p.m. with performance beginning at 5:30. Doors for the second seating are at 7:30 p.m. with music starting at 8 p.m. Tickets at $40 or $136 for a subscription to the remaining Club Series performances through Aug. 8. Full dinner service is available, not included in ticket cost and a $30 per person food or beverage minimum applies. Get tickets here.

The All-Stars deliver a fiery big stage performance in the Jazz Tent at Lionshead’s Vail Square at 6 p.m. on Thursday, July 19. Tickets are $25 for general admission, $40 for preferred seat and $50 for premium seat. Subscriptions are also available for multiple performances. Beer, wine and cocktails are available for purchase. Also, don’t miss the after party with local pianist Kathy Morrow at the Vail Chophouse from 8 to 10 p.m. Get tickets here.

Inside the Vail Jazz Festival: The Vegas Strip Scroll to top