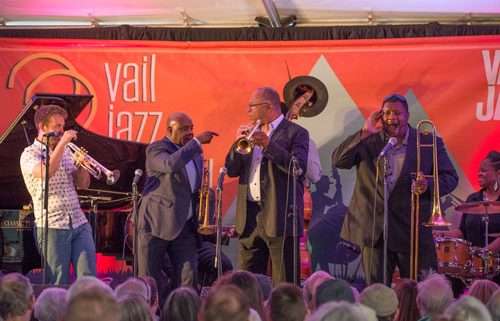 Howard Stone likens a jazz jam session to a fantastic conversation. Sometimes you fall into a vibrant discussion that surprises you. It not only makes you feel alive with cognitive and creative power, but introduces  ideas and perspectives you’d never heard before. It causes you to walk away feeling inspired, even a better person. Such is the magic of the 23rd Annual Vail Jazz Labor Day Weekend Jazz Party.

The beauty of the Vail Jazz Party is that in addition to the fact that every session features a collection of world-class musicians, each ensemble delivers a one-off spontaneous masterpiece that never be exactly reproduced or repeated.

“It’s an opportunity for each player to express themselves in a way that leads to something else, that leaves room for self-expression from every player,” explains Stone, Vail Jazz founder. “It’s a breakthrough moment in a jam session when someone is musically communicating and the other person says, ‘wow, I never thought of that.’ It’s a very creative moment. It takes someone – everyone – to places they’ve never gone before.”

From Friday through Monday, in addition to numerous multi-media performances, the Vail Jazz Party is comprised of morning, afternoon, evening and late-night sessions fusing soloists and band members who, in some cases, have never played together before. Combining individuals is a complex jigsaw puzzle for Stone to solve year after year, placing not only the necessary instruments for a complete ensemble, but matching talent and personalities who likely to sync and, hopefully soar.

“Chemistry is chemistry,” Stone says. “One time I put a jam session together with a guy who’d slept with another’s wife. They wouldn’t look at each other. You have to understand who will make music well, also who will work well from a personality standpoint. You want to put people together who will make a great conversation and will fascinate an audience with the conversation.”

Award-winning drummer and long-time Vail Jazz Party favorite Jeff Hamilton has experienced the magic of Stone’s match-making to the point that the sessions have led to lifelong friendships, tours and recording collaborations. A couple of years ago, Stone persuaded the drummer to share the stage with Japanese-born pianist Akiko Tsuruga. Hamilton was initially reluctant because he didn’t think their styles and approaches would pair well. The two have since performed numerous times and recorded two? Albums together. A similar bond emerged last year between Hamilton clarinet sensation Adrian Cunningham, whom collaborated on Cunningham’s forthcoming record (the release part is Sept. 1 during the Vail Jazz Party).

“In Adrian’s case and Akiko’s, we’ve listened to the same recordings and have the same vocabulary musically. You’ll go into this mode of playing, making everyone sound as incredible as they possibly can,” Hamilton says. “The other thing that happened last year … I was a last minute add-in with Diego Figueiredo. He realized I knew all the material he was going to play and he made a medley. It was like a five-tune medley. Neither of us knew it was going to happen, but the mutual trust … a sixth sense …  we just knew what to do. You feel like you could play forever.”

There is indeed a type of telepathy at work at the Vail Jazz Party. Adrian Cunningham calls it intuition. Of course, there is a lot of background and know-how involved, too.

“The thing about jazz, it uses a language and framework that is pretty universal,” Cunningham says. “Jazz is inclusive, embracing all levels and cultures and I think that’s why it’s so popular around the world. Even if you don’t speak the same language, you can connect musically.”

Whether it’s an American Songbook classic or a rare tune passed down from generations in a distant land, the Vail Jazz sessions deliver numbers with volcanic energy as if each ensemble had played and practiced together for weeks.

“You can wander from there, and the further you wander, the more exciting it is, because if you trust that it’ll work out, it always does,” Cunningham says. “As a musician, that gets so exciting. It’s like, what’s gonna happen? What are these guys gonna do?”

The affect of a successful Vail Jazz session is an epiphany. The Vail Jazz Party, if all goes well, leads to one epiphany after another, not just for the musicians, but for the audiences.

“The combination of all these musicians being in the same place at the same time doesn’t happen very often. Even when these guys are playing at a typical festival, they go on stage, they play, they may hear the next act or the act before them. Then they get on a plane and go someplace else,” Stone says. “Here, there’s this sense of, ‘wow, we’re all together making music.’ They’ve mastered the art of conversation. They know a lot about a lot of topics. It’s nirvana.”

Young musical talent is about to be amplified

The Singing and Guitar Playing Miracle Scroll to top