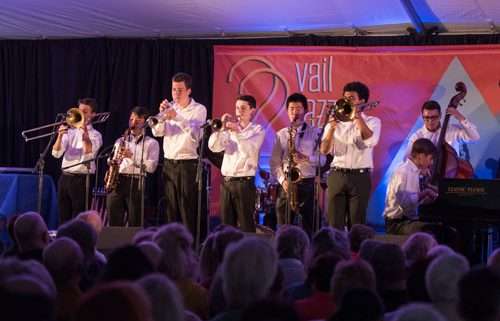 Growing up listening to his Caribbean mother’s Calypso music, Marvin Carter knew that music was his calling. The high school senior spends five to six hours a day playing the alto saxophone, and it never feels like a chore.

“It’s a way of life, me playing the saxophone,” says the teenager from Brooklyn, New York, who is one of 12 students selected nationwide from a sea of 150 incredibly qualified applicants for the 2017 Vail Jazz Workshop. “I play as much as I can. It’s something I wake up to do.”

Over the last 22 years, the teenage musical prodigies that comprise the Workshop arrive in Vail with resumes more stacked than most adults at the end of their careers. Carter, for example, began playing the sax in fourth grade and performs with the Performance Music Workshop Big Band, the Jazz at Lincoln Center Youth Band, Arturo O’Farrill’s Fat Cat Band, the LaGuardia New Music Ensemble and the Brooklyn College Big Band.

He is himself an instructor to young musicians and has also taught the occasional adult. Before he was 12 years old, Carter began playing in a community band and met a retired police officer whom he began teaching.

“I was fortunate to meet David Coleman when he was working at perfecting his craft,” Carter says. “I helped him out with rhythms. For my 12th birthday he surprised me and gave me my saxophone that I’m using to this day. He’s still pretty much my best friend.”

Friendships certainly abound from the Vail Jazz Workshop, but first and foremost come the skills that the young musicians often don’t realize they possess. The Workshop hones in on intensive play-by-ear training with a team of award-winning musician mentors – John Clayton, who has led the program since its inception 22 years ago, Jeff Clayton, Bill Cunliffe, Wycliffe Gordon, Terell Stafford and Lewis Nash.

“It’s about balance,” John Clayton says of the Workshop, which has cultivated more than 200 young musicians since its inception, many of whom have gone on to become Grammy winners and successful professional musicians. “The person who can play by ear and read music and understand theory has more choices.”

Chris Ferrari, a tenor sax player in the 2017 Vail Jazz Workshop group, is eager to expand the choices of his repertoire. About to start his junior year at Denver School of the Arts, Ferrari has won multiple Downbeat Student Music Awards and was turned onto Vail after watching his friend, 2016 Vail Jazz Workshop alumni Gabe Rupe perform last year.

“Gabe was always one of those people to blow me away. Just seeing the level of talent that came out of the program, I was like, this is no joke. It’s ridiculous to be able to work with John Clayton and all the mentors with such intensity. There is no doubt it will change your outlook and ability as a musician,” Ferrari says.

Ferrari believes that the most important aspect of performing and particularly of improvising on stage is “creating a beautiful story.”

“A lot of times there’s so much vocabulary, patterns and scales … technical aspects to incorporate into our playing, far too often it gets overplayed,” the teen says.

Ferrari anticipates that the Vail Jazz Workshop will serve as a springboard for a flourishing profession of Lincoln Center and Blue Note performances.

“I think it’s always good to dream big. I’ve always had goals of playing on big stages,” he says. “I’ve been able to see people not much older than me doing that. You have to dedicate yourself. If you’re into music and it’s something you want to do, you should be able to share that with the world.”

In addition to Carter and Ferrari, the 2017 Vail Jazz Workshop is comprised of bass players Ben Feldman from Seattle and Colorado native Anthony Golden. Drummers include Kofi Shepsu from Richmond, VA and Peter Glynn from Maplewood, NJ. Clay Eshleman from Marietta, GA and Ari Chais from Tel Aviv, Israel are the group’s pianists, Geoffrey Gallante from Alexandria, VA and James Haddad from Brooklyn the trumpeters and Zach Guzman Mejia of Las Vegas and Sam Keedy of Greeley on trombone.

“On that first day at the Workshop when we get a feel for their level, through the years, our eyebrows go up higher and higher,” John Clayton says. “We look at each other and say, ‘Wow. Not only are they doing stuff we could never do at their age, but they’re doing stuff we can’t even do now.’”

The left hand knows what the right hand is doing

The art of the jam session Scroll to top