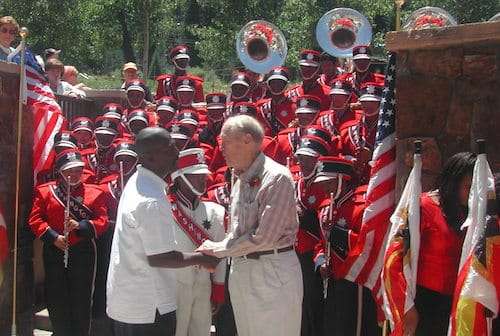 With July 4th rapidly approaching, I thought I would write an article about the connection between jazz and Independence Day. While I was inspired by the subject matter, I drew a blank and I was about to give up, when just like fireworks exploding in the sky over Vail Mountain, it came to me. What do jazz and the Fourth have in common? Freedom.

The Declaration of Independence was signed on July 4, 1776 in Philadelphia, but it would

take the Revolutionary War and another 27 years before the U.S. would complete the Louisiana Purchase, thereby acquiring what would become the “birthplace” of jazz: New Orleans. And it would be another century until jazz was “born” in the Crescent City, brought into existence by African-American musicians whose grandparents and parents had been freed from slavery only 50 years before. So jazz’s first connection with freedom was a direct result of the Emancipation Proclamation and the Civil War. What followed musically speaking was the creation of a new form of music that has flourished over the next 100 years because of a fundamental difference between jazz and other music – the freedom to improvise and to evolve. Yes, in the world of classical music, a soloist like Mozart could improvise when playing the cadenza to a concerto, but in jazz, everyone gets to improvise. So, just as the colonists had wanted freedom from the tyranny of King George, and just as the slaves had wanted freedom from their slave masters, so too did the early jazz musicians want the freedom to create their own music, and they did.

However, in jazz nothing lasts forever, and by the 1930s, the brass bands and New Orleans style of jazz were toppled by a revolutionary approach to the music. The Swing Era began with big bands playing jazz to dance to and it became the most popular music of the day, rapidly spreading throughout the country. And yet, the story doesn’t end here, because with the freedom to improvise and to innovate, jazz musicians have always been pushing the envelope. By the mid-1940s, a group of musicians led by Charlie Parker, Dizzy Gillespie and Thelonious Monk began to play in a completely different manner that became known as bebop. The groups they played in were no longer big bands, but instead small combos. The structure of the music was much freer with all the musicians allowed to improvise simultaneously. Tempos were generally much faster than in swing music and melody gave way to harmonic complexity and rhythm changes. The music was for listening, not dancing. The Swing Era was over. Long live Bebop! Moreover, in the decades that followed there have been many more revolutions in jazz.

The journalist J.A. Rogers may have summed it up best when he observed, “the true spirit of jazz is a joyous revolt from convention, custom, authority, boredom, even sorrow…” Jazz was a musical revolution that set it apart from other genres of music. The fact that a musician could spontaneously express himself while being a member of a group was a remarkable idea and a technical feat, but also had implications far beyond the music itself.

The great Duke Ellington said it best: “…. jazz is a good barometer of freedom… In its beginnings, the United States of America spawned certain ideals of freedom and independence through which, eventually, jazz was evolved, and the music is so free that many people say it is the only unhampered, unhindered expression of complete freedom yet produced in this country.”

For a number of years, beginning in 1999, Vail Jazz brought a high school jazz and marching band from Los Angeles to celebrate the Fourth with our community and this year to celebrate our nation’s birth and the 25th anniversary of Vail Jazz, we will once again bring L.A.-based Fernando Pullum and his award-winning jazz band to play in the Vail America’s Day Parade on July 4th and to perform a free concert in Lionshead at 1 p.m. Since this is a very special year for Vail Jazz, we are in a particularly celebratory mood and we will cap our Independence Day celebration by presenting one of Vail’s favorite performers, Marcia Ball, in a show entitled, “Vail Jazz Celebrates the Red, White and the Blues,” at 6 p.m. in the Jazz Tent in Lionshead (Get tickets here).

So, as we all celebrate the birth of our country this Fourth of July and the freedom that has been bestowed upon us, please join us as we enjoy the uniquely American music that is the epitome of freedom: jazz. Happy Fourth of July!