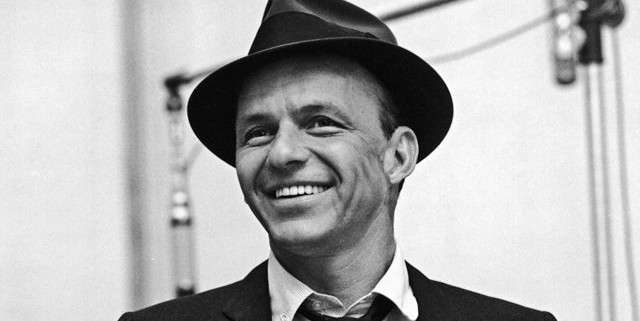 The material form of Frank Sinatra isn’t around to celebrate his 100th birthday this year, but his legacy is embodied in a force that will impact the music and entertainment industry for centuries to come.

Revered by many as the most popular entertainer in history, Sinatra kicked off his career as a big band singer in the 1930s with the Tommy Dorsey and Harry James bands. His hypnotizing voice first won its way into the world’s hearts crooning classics like “New York, New York” and “I’ve Got You Under My Skin.” His unmistakable, swinging vocal style has become gospel for these hits. Sinatra was quickly appointed a master of song and, among other nicknames, The Chairman of the Board. He went solo in 1942 and broke ground for a steady, nonstop string of solo artists that continues today.

Sinatra was the first to draw attention to the fact that the voice is a complex and specialized instrument. (Another of his nicknames, after all, is The Voice). He used it in a way that crossed musical genres, strategically creating a catalogue that not only dominated the musical charts (“Only the Lonely,” “My Way” and “Strangers in the Night,”) but also resonated with pop fans, big band purists and even classical music lovers. Of course, the man could also act, and he won an Academy Award and a Golden Globe for his role in “From Here to Eternity” and landed leads and much acclaim in classics like “The Man with the Golden Arm” and “The Manchurian Candidate.”

Even into old age, Sinatra swooned audiences before passing away in 1998 at the age of 82. This December, The Sultan of Swoon would be 100 years old, but his legacy is eternal.

Sinatra’s influence and inspiration lives on, which is why the world will celebrate his 100th. Several documentaries and historical exhibits have popped up throughout the country, sports teams have been acknowledging Ol’ Blue Eyes with a tribute night, Jack Daniels has made a select Sinatra whiskey blend and, yes, there is even a free mobile app (search for “Frank Sinatra 100” in the App Store). This spring, dozens of musicians gathered in New York City for a tribute at Carnegie Hall. In one form or other, his style has influenced every musician.

One artist unquestionably inspired by Sinatra is Curtis Stigers, who will star in the Vail Jazz Festival’s A Swingin’ Affair on July 13, Frank Sinatra’s 100th birthday celebration, in which he will perform a rare lineup of Nelson Riddle arrangements written expressly for Sinatra. While Stigers cites a variety of artists as inspiration — Ray Charles, Nat King Cole, Willie Nelson and Bob Dylan — he said “Frank wins out as my favorite.”

“Sinatra’s ability to tell a story with a song’s lyrics is second to none,” Stigers said. “He also had an incredible ability to swing and to move in and out of a song’s time with ease and mastery. I’ve studied his records like textbooks, trying to absorb his technique and style and put it into my music.”

Stigers’ goal in the upcoming Vail performance is not to channel Sinatra but to pay homage to The Chairman’s talent with his own flare.

“The trick to singing Sinatra arrangements for me is to find a way to be true to what Frank did and still sing in my own voice,” he said. “I want to celebrate Sinatra without doing an impression of him. These arrangements are so much fun to sing.”

More than etching his one-of-a-kind sound and style into the world, Sinatra’s incomparable ability to continuously rise to the top over a career that spanned a whopping six decades resonates with other artists.

“Every time it looked like he was washed up as a pop star, he managed to evolve and grow, make a great album or series of albums, and suddenly he was back on top again,” Stigers said. “Frank Sinatra is the best pop singer in the history of recorded music. He combined pop and jazz and show music to create a way of singing that has influenced several generations of singers.”

Hazel Scott: To thy own self be true