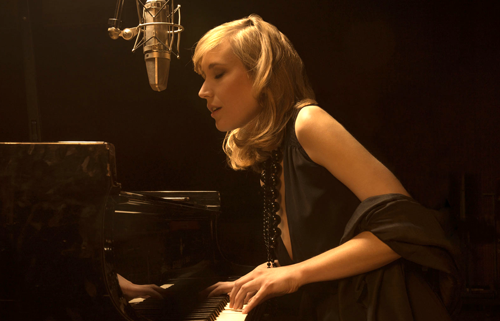 Sarah McKenzie has etched herself a firm place on Australia’s map of formidable jazz artists, and now she’s taking on the rest of the world. At the moment, the Melbourne native calls Paris home.

“To say that I love Paris would be an understatement,” the singer-pianist said. “In Paris, you can be inspired by every little thing … an old street lamp, a cobblestone lane, a little cafe. Paris has had a big influence on my writing, and I am certain it will continue to do so.”

McKenzie’s original compositions have always arrived to her naturally, inspired by the world around her.

“I wrote the music for ‘We Could Be Lovers’ while living in Boston. I had a tiny apartment on the top floor of my building just near Symphony Hall, and I did most of my writing while gazing out the window at the skyline,” she said. “In three years, I watched all the seasons come and go.

“It has been said that I have ‘an old soul,’ and I do find that to be true. I love the way the writers of the Great American Songbook wrote tunes, particularly how they wrote lyrics. I love the old charm and wit they used. I have never tried to force anything writing-wise.”

The Australian’s latest release also features covers by Cole Porter, George Gershwin, Henry Mancini, Duke Ellington and other greats whom McKenzie said naturally influence her musical style. She names Maria Schneider and Dianne Reeves as vocal inspirations. As a young girl, it was Oscar Peterson’s “Night Train” that made her fall in love with jazz music.

“I remember it vividly,” she said. “I was 13 years of age, and I just felt while listening to the recording that it was really special. I had never heard a kind of music like it before, but I knew instantly that I loved it and wanted to be a part of this music called jazz.”

Composing since the age of 5, McKenzie’s musical ability evolved along with her depth of knowledge about the structures of jazz. Still, she believes there is a common ingredient at the heart of every amazing song.

“I listen constantly and not just to jazz,” she said. “Recently, I’ve been listening a lot to the great film writers — John Williams, Michele le Grand and Nino Rota. Film writers write great melodies. Great melodies. Without a great melody, you don’t have a great tune.”

Although her composition process differs for every number, McKenzie’s tunes typically begin with an idea or, in the case of the recent “Onwards and Upwards,” a solid title.

“For this particular tune, I had the title first and sat down at the piano and tried to visualize something that would fit. I wanted something similar to the sound of the Nat King Cole trio with the Freddie Green-style guitar and George Shearing-style voice,” she says. “I then addressed the melody. It needed to be something simple and catchy for the verses and something to vary it in the bridge. I came up with a simple idea and it stuck with me. When a melody gets stuck in your head, that’s a good sign.”

Judging by the reactions from her audiences, McKenzie’s melodies are contagious. When asked to recount the most memorable feedback she’s received about her music, McKenzie mentioned a young fan who named nearly every one of her songs as his favorite.

“I had a 14-year-old fan write recently to tell me how much he and his sister liked my music. He wrote that he enjoyed hearing me play on Jamie Cullum’s Show on BBC Radio 2 and that his favorite songs were … basically all of them,” she said.

“I thought this was so endearing and funny. He writes on to tell me that they are his favorite songs because they have timeless and unforgettable lyrics and melodies that you can sing along to and that they make everybody feel happy. I don’t know if I could receive any greater feedback than that my music makes people happy.”