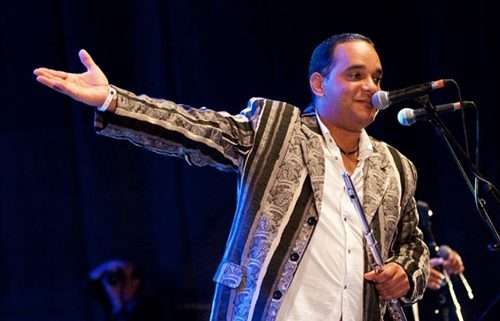 It might be surprising that a flute player stirs up the kind of energy that causes audiences to leap on stage and start dancing. Or to make a blind man claim that he can see. But such is the miracle of Orlando “Maraca” Valle’s music.

“Many times before getting on stage, there are so many high spirits and so much burning desire to listen that I think success is guaranteed. And it’s true that when we get on stage a kind of mysterious interaction between the audience and the band is established, and it can get to extreme ways of communicating,” Valle says. “Sometimes the artist gets off the stage, going toward the audience, or sometimes people from the audience get on stage. In any case, we care about sincerity and self-confidence when we perform because these are the ways to engage the audience.”

Hailing from a family of musicians in Havana, Cuba, Valle took up the flute at the age of 10 on the suggestion of one of his talented brothers.

“I agreed although I preferred the guitar or the alto saxophone,” Valle says. “But then I fell in love with the flute and later it became the tool through which I express myself … my body extension. The flute has been carrying my voice, my thoughts and feelings all over the world.”

In his 20s, Valle joined the band Irakere as arranger, flute and keyboard player. Founded by Chucho Valdés and Paquito D’Rivera, the ensemble was famous throughout Cuba and Latin America. Soon Valle was rubbing shoulders and performing with the likes of Dizzy Gillespie and Chick Corea. It was in 1994 that Valle launched his solo career and has made remarkable traction ever since as a widely respected writer and arranger, collaborating with some of the hottest jazz artists across the globe.

“I’m very grateful to all of them because all of them are masters for me,” Valley says. “But I have to say that playing with Tito Puente, Tata Guines, Cesaria Evora, Chucho Valdes, Wynton Marsalis or Al Di Meola provided me with priceless experience. And most of these experiences and collaborations were spontaneous, so natural and fluent that they’re locked in my heart.”

Spontaneity is the cornerstone of Valle’s style and live performance energy. It’s also what brings him his greatest joy on stage.

“Improvising [has] been coming naturally to me since I was a child. Improvising allows me to express my own vision of the world, of life, my feelings and my dreams,” he says. “It brings me a lot of inner peace. I enjoy it so much.”

Then again, Valle can name many sources of musical passion.

“I enjoy conducting an orchestra, composing and arranging music, performing other composers’ music, different styles of music from different cultures…I also find it fascinating the communication and feedback between musicians,” he says. “Sometimes without knowing each other before performing together, nor having rehearsed together, they establish a unique musical conversation which can remain in the mind of all who assist this show forever.”

When it comes to playing with musicians he does know, for instance, his own Latin Jazz All-Stars, the “musical conversation” reaches sonic proportions.

“This is the kind of energy our planet needs – solar energy – but this energy doesn’t pollute,” Valle says. “It does heal hearts. On stage we’re all delighted to perform together and we enjoy everyone’s performance. And you can feel this. Our mutual admiration allows the audience to enjoy an exceptional concert.”

So exceptional is Maraca’s music that it has literally delivered vision and an uncanny urge to dance, even to the most unassuming of audiences.

“The most memorable feedback came from a fan of mine who is blind. When he first met me in person, he got so nervous that he was shaking with excitement and he confessed that my music made him see,” Valle says. “I also remember a great show in Grand Rapids, MI, where the front part of the audience was made of people in wheelchairs and some of them with artificial limbs got on stage and danced with the band. Finally, the most important feedback may come from children, because children don’t lie about what they like or what they don’t. When you see that your music is making them happy it is because something beautiful is going on.”

Orlando “Maraca” Valle performs with the Latin Jazz All-Stars at Vail Jazz @ Vail Square from 6 to 8 p.m. Aug. 17 inside the all-weather jazz tent in Lionshead. General admission tickets are $20 in advance and premium seating is $40 in advance. For tickets or more information, visit vailjazz.org or call 888-VAIL-JAM

Afro-Cuban Jazz is all sugar, drums and clave

LOVE AND JEALOUSY: MORE DEADLY THAN HEROIN Scroll to top