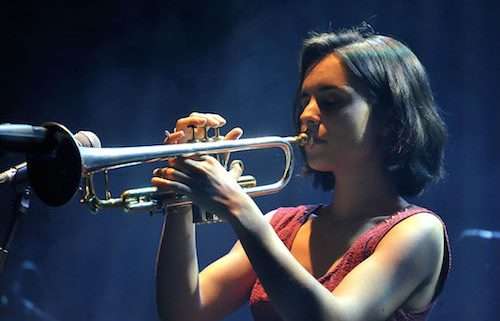 In her own words, Spanish musician Andrea Motis provides insight on her background and inspirations

At 23 years old, Spanish-born Andrea Motis has already notched a lengthy career as a professional musician. When she was 7 she took on the role of lead trumpeter and also saxophonist at the Municipal School of Music of Sant Andreu in Barcelona. Playing with the Saint Andreu Jazz Band for another nine years, Motis performed and recording with the likes of Wycliffe Gordon, Jesse Davis, Bobby Gordon and Dick Oatts, to name just a few. By the time she was 15, she released her first album of jazz standards and after a couple more album recordings, she released last year’s Emotional Dance on major label Impulse! Records, highlighting her incredible range and deftness on trumpet as well as her alluring vocal talent. She has taken the European jazz scene by storm.Vail Jazz founder Howard Stone can also attest to the jaw-dropping caliber of her talent, having first seen her perform as a teenager.

“I see a 14-year-old performing at a major jazz festival and I said, ‘what the hell? This is unbelievable.’ I think I have to keep an eye on this gal. When she was 22, I worked with another organization to bring her to the states. They were willing to sponsor her and her band to come. She went to Stanford and they put out an email asking if anyone was interested in booking her. Of course I said yes. She’s not a household name, but she’s really a big deal in Europe.

Making her Vail debut, Andrea Motis joins one of New York City’s most lauded tenor sax players, Vail Jazz favorite Joel Frahm, for a trio of Vail Jazz performances. Catching up with Motis last week, we picked her brain about her inspirations and goals.

Andrea Motis: It was a causality, as I, at age 7, only knew some instruments like violins or pianos. In my neighborhood’s municipal school of music there were no more places for students of these instruments, only more “rare” instruments. So my father had a trumpet from when he was playing it at about 15 years old. He told me to at least get into the school with his instrument and, after that in one year or so, changing if I wanted. But I had a really good teacher and person – Toni Gallart – and I never left.

2. VJ: What was your initial impression of Joel Frahm and why did you choose him for your album and collaborative projects? How would you describe your on-stage dynamic?

AM: I first knew about Joel Frahm through the recording, Live at Smalls by singer Cyrille Aimée. I love that recording and all the musicians playing on it. It is such fresh music and standards that I love playing [played] so naturally and well. For me, his sound on this CD was some kind of “perfect” and I thought I would love having him on the CD. On stage, there isn’t any mystery. It is so easy to work with such a great musician like Joel who knows about all the standards. We just pick the ones we know better and he can perfectly play whatever new music we give him. We’ve also played originals. In fact, he’s playing on my originals on the CD, Emotional Dance.

3. VJ: What would you say are the most important elements necessary for a musician to successfully play by ear (as you do so well)?

AM: 1. Listening to music (jazz), 2. Learning by heart lots of melodies, 3. Transcribing some solos, 4. Playing as much as you can

4. VJ: As a young artist, what have been your most memorable performance/audience experiences to date?

AM: There are so many! One of the more special [experiences] to date was last August when I performed for the first time at the big outdoor theater – Grec – in Barcelona under my name. I prepared a three-part-show with jazz and songs with contemporary dance and funk. With so many great musicians and dancers, it was, for me, like a dream come true.

5. VJ: What are your ultimate goals as a musician?

AM: To be able to play every [type of] music I love, being able to improvise musically as I feel it without technical or theoretical troubles and to work more for playing it easily. Also composing and arranging more in the future and feeling free to do whatever appears in my mind.

6. VJ: Who are other artists with whom you’d like to collaborate in the future and why?

AM: Cécile Mc Lorin Salvant. I admire her so much. Ingrid Jensen … I feel I like can play by her side. Many others that are just great people, friends and musicians. That’s so important. Also people I’ve already played with and I’ve discovered how well could we work together, such as Pasquale Grasso and Federico Dannemann on guitars.

7. VJ: What artists are you listening to at the moment and why do you find them inspiring?

AM: Freddie Hubbard, Mingus, Monk, Avishai Cohen, Parker, Tom Harrell, Esperanza Spalding, John Erik-Kellso, Luigi Grasso, to just saying people that come to my mind. It’s better to hear it [yourself] and take what you feel about it. I think that will be much better than trying to explain what I take from all that …

Andrea Motis and Joel Frahm perform a pair of intimate loung performances at The Sonnenalp’s Ludwig’s Terrace on Wednesday, Aug. 1. Doors for the first seating open at 5 p.m. with performance beginning at 5:30. Doors for the second seating are at 7:30 p.m. with music starting at 8 p.m. Tickets at $40. Full dinner service is available, not included in ticket cost and a $30 per person food or beverage minimum applies. Get tickets here.

The pair take their talent to the big stage in the Jazz Tent at Lionshead’s Vail Square at 6 p.m. on Thursday, Aug. 2. Tickets are $25 for general admission, $40 for preferred seat and $50 for premium seats. Beer, wine and cocktails are available for purchase. Get tickets here.