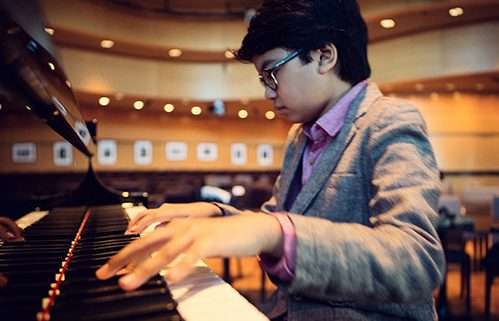 Living in the moment is a philosophy that Joey Alexander follows not only to his musical career but also in life.

Speaking on the phone with the Balinese pianist, it is nearly impossible to tell that he just turned 13. He is gracious and thoughtful when answering questions and amazingly articulate for a boy his age, especially given that he’s only been learning English for a couple of years.

But considering his eloquence on the piano – evidenced by the rapt attention of fellow musical stars at this year’s GRAMMY Awards performance and pretty much wherever else he plays – it’s really not that much of a surprise.

Joey taught himself how to play an electric keyboard at the age of 6. He received his first real piano at age 7 and by the time he was 8, was performing for the likes of Herbie Hancock.

“I don’t remember exactly when I felt like this is what I’m going to do, I was just playing,” Joey says. “I could just feel it. It’s such a big instrument and the keys, the mechanics … I just loved the big sound of it. It was kind of hard for me to reach the high notes – I was very small at the time – but I loved the big sound. That’s what interests me about the piano … it’s orchestra. It’s a complete instrument.”

At 10, thanks to a special invitation by Wynton Marsalis, he made his debut at Jazz at Lincoln Center. Shortly afterward, he and his family moved from Indonesia to New York City. He performed on two stages at the Newport Jazz Festival. Since moving to the U.S. he has played at major jazz festivals around the world as well as at the White House for President Obama. His debut album – 2015’s My Favorite Things – garnered two GRAMMY nominations for Best Jazz Instrumental Album and Best Improvised Solo (on John Coltrane’s “Giant Steps”). A forthcoming album – Countdown – is scheduled for a September release and Joey is excited to perform his new material in Vail this Thursday.

“On this record I explore more musically,” he says, adding that the album features three of his original compositions. “I compose something when I’m practicing but not really thinking about it. It just flows to me, almost [directly] to my hands. It just comes out.”

The young artist was performing in upstate New York on his 13th birthday this June. He says there was no place he’d rather be than on stage to celebrate his existence. The venue surprised him with a piano-shaped birthday cake and the entire audience singing, “Happy Birthday.”

“It was a surprise,” he says. “Everyone was clapping and singing. I was actually very happy that I was even playing. It was [enjoyable] for me to be on stage when I can share my day and the talent that god’s given me.”

When asked to name his most exciting or memorable experience so far in his young musical career, one would think Joey would immediately name his White House or GRAMMY performance, but no.

“For me a small stage, a big stage, everything is really important to me,” he says. “It’s the music I want to give. Every experience has a different vibe for sure. There are people that just want to listen. When I went to Europe, every city was a different vibe, which was great.”

As far as his future goals, the 13-year-old is not someone who looks ahead but who embraces what is right before him.

“I always want to be thankful. I’m really happy with what I’m doing now,” he says. “Of course I’m thinking forward about how I [can] better myself, but not thinking about the future. That’s the thing about jazz …it’s about the moment.”

Joey Alexander, 13-year-old piano sensation, performs with bassist Dan Chmielinski and drummer Ulysses Owens, Jr. this Thursday at Vail Square. The performance is from 6 to 8 p.m. inside the all-weather jazz tent in Lionshead. General admission tickets are sold out but premium seating is available for $40 in advance. For tickets or more information visit vailjazz.org or call 888-VAIL-JAM.