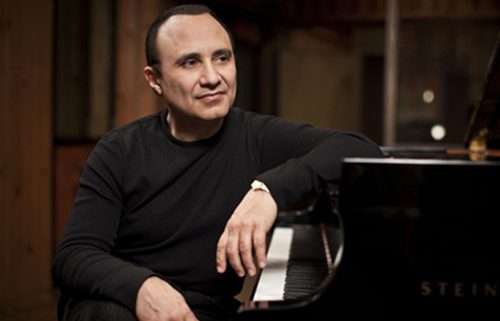 Just as a Spanish kitchen heats up quickly, filling the air with aromas and flavors of hot peppers and savory rice into a sizzling dish, Michel Camilo takes the stage with zest, putting a dash of salt and pepper into his original piano compositions and arrangements. The Grammy award winning Pianist & Composer infuses Latin-Jazz and Classical music together right at his fingertips. Forming advanced and modern compositions and arrangements. Camilo takes the influences of big band music and transforms the style into vibrant solo piano.

On his latest album “What’s Up?” Camilo takes standards such as “Take Five” and “Love for Sale” and performs them in an explosive and unheard velocity. Camilo incorporates new originals “Paprika”, “On Fire” and “Island Beat” that intrigue the audience to internalize the music not just through the ears, but that make you want to dance from your head to your toes!

Michel Camilo is not afraid to show versatility, from collaborating with Latin-Jazz artists such as Paquito D’Rivera, Tomatito and Gary Burton to performing original piano concertos with some of the world’s biggest symphonies including the BBC Symphony Orchestra, Detroit Symphony Orchestra and the National Symphony Orchestra of his home country Dominican Republic.

Vail Jazz is pleased to welcome to the stage this summer, Michel Camilo along with Cliff Almond on Drum & Percussion and Latin-Jazz Bassist Lincoln Goines. The three were recently featured together on the album Playing Lecuona and performances include the Blue Note Nyc/Tokyo, Ronnie Scott’s Newport Jazz Festival, and Copenhagen Jazz House.

are now available at www.vailjazz.org/tickets/

Jazz Cats and Their Hats Scroll to top