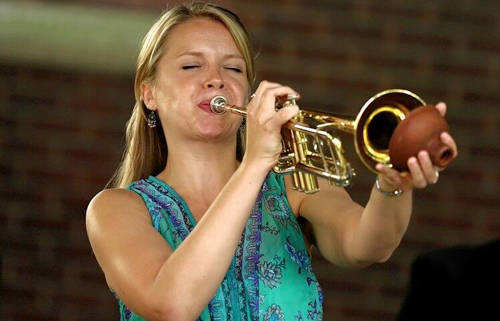 Hailed by many as one of the modern jazz world’s most striking talents, the trumpet player/singer recounts her multi-faceted route toward self-expression

Impossible to guess while hypnotized by her sultry, 1950s- style vocals, red hot trumpet solos and commanding stage presence, Bria Skonberg is a “trained extrovert.” Growing up on a farm in the small town of Chilliwack outside of Vancouver, B.C., the 30-year-old fell in love with the trumpet as preteen after her parents encouraged her to play with a variety of instruments – the piano, bass and clarinet.

“I always understood that music is like food,” Skonberg says. “You should try everything.” That adventurous mindset has led the Canadian to her eclectic sound. Rooted in traditional jazz, Skonberg has not held back when it comes to experimenting with world percussion and electronic sounds on her first three records and promises that the fourth upcoming recording (crowdfunded here), will house her most dynamic original material to date.

This unconstrained drive that appears to define Skonberg’s style and character did not come naturally to the musician … or so she says. She claims that she was extremely shy as a child and didn’t truly come out of her shell until taking the lead role (Sandy) as a ninth grader in her school’s musical performance of Grease.

Clearly, the extrovert training became intensive because by the time Skonberg was midway through high school, she had worked her way up the ranks in school bands and choir, had instigated and managed her own jazz, ska, big bands and even a marching band. She was also captain of the basketball team and president of student council.

“I’m a product of great parents and teachers,” says the tall, striking blonde from a midtown diner near Manhattan’s famous Birdland Jazz Club, where Skonberg regularly performs with Wycliffe Gordon (Vail Jazz Workshop instructor) and a slew of other jazz greats in between traveling the world with her own band  “The play in ninth grade was where I started to sing openly. I was too shy before that. Now I can see the trajectory. The trumpet has been a great vehicle for letting that soul out,” she says.

Skonberg moved to New York City from Vancouver in 2010. It took her no time at all to find her stride and take up her cadre of activities, but these days, they’re all geared toward making, performing and teaching music. While she can’t exactly cut loose on the trumpet in her small Lower East Side apartment, the Canadian spends a significant chunk of every day she’s in town making faces at herself in the mirror in an effort to dial in her most efficient trumpet mouth. And she prefers to tackle all of her chores and training within a calculated time slot.

“If you can focus for 10 minutes and play something vigorous, it’s like heavy lifting. You need air in between. It’s this buzz that happens. But a lot of practice is me looking in the mirror going [makes a puckered lip face]. With the trumpet, you have to do whatever you can do to efficiently push air through the horn and make it vibrate. Working on dexterity, placement of the tongue … it’s the mechanical things that make the difference. You get one finger partially off and it starts to squeak.”

There’s not much squeaking that happens in Skonberg’s world, literally or figuratively. Whether she’s launching into a trumpet solo or belting out a verse, kindling a hot jazz camp for kids in the city, pledging for feedback and funds for a new record, testing a line for her next original tune, performing as a sidewoman (“at this point I’m one of the guys”) with an ensemble of big name veterans or conducting an honest interview in a Manhattan coffee shop, she is going all out.

But she says the extrovert training is still a work in progress. One key step Skonberg has unquestionably mastered is embracing her unique talent and letting it shine unobstructed, uncompromised by any doctoring or dolling up.

“In the jazz world, we call that a ‘hood ornament,’” she says. “When I moved to New York, I had this idea that if you’re too pretty, people won’t take you seriously. When I lived in British Columbia I was wearing sparkly dresses, singing for a big band. I plugged that into New York, and it didn’t have the same effect. So I cut through the … whatever the politically correct word is …. and it was a huge integrity check along the way. Now four or five years in, I’m more comfortable. I can say, this is what I look like. This is what I play like. Now what am I going to do that’s different?”