Grammy Award-winning jazz pianist and composer Bill Cunliffe is known for his innovative and swinging recordings and compositions. Originally from Andover, Massachusetts, Cunliffe attended Duke University and studied jazz with pianist Mary Lou Williams and later received his master’s degree from the Eastman School of Music.

In addition to receiving five Grammy nominations, he is a two-time Emmy nominee. Cunliffe was awarded a Grammy for Best Instrumental Arrangement for “West Side Story Medley,” on the album “Resonance Big Band Plays Tribute to Oscar Peterson” (Resonance Records, 2009). On top of his other awards, Cunliffe’s other accomplishments include works with the great Frank Sinatra, James Moody, and Freddie Hubbard. He has also composed numbers for major orchestras as well as TV soundtracks.

The jazz pianist now calls Southern California home and is a Professor of Music at California State University Fullerton. Bill currently plays with his trio; his big band; his Latin band, Imaginación; and his classical-jazz ensemble, Trimotif. He performs in the U.S. and around the world as a leader and sideman as well as a soloist with symphony orchestras.

What is the best aspect of the Vail Jazz Party?

It merges musicians presenting their own original material but also thrown together in unexpected ways to see what happens. You get a whole different sense of what the musicians can do.

Any on-stage or pre-gig sippers?

I’ve seen many pianos fall victim to spilled beverages. We pianists tend to shy away from on-stage drinking. I always have water before I go up.

What about a post-gig beverage?

I have been known to engage in an occasional glass of wine. I like bigger reds.

And your favorite post-gig meal?

What is the most striking venue you’ve ever played?

The Vail Jazz Festival outdoor tent. There is no better audience than the Vail audience. You can hear a pin drop, they are listening so intently. They really care about the music. 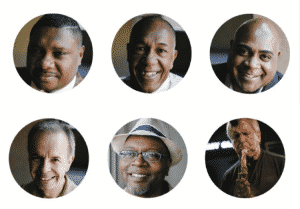 Stay tuned for next week’s “Q+A with: Wycliffe Gordon”!

This article is part of a 6-part series highlighting the Vail Jazz Workshop instructors, who comprise the Vail Jazz Party House Band. In it’s 20th year, the Vail Jazz Workshop recruits 12 of the nation’s most talented teenage jazz musicians who travel to Vail for a week of intensive, two-to-one learning with the instructors. The students refine their skills, learn the art of playing by ear and most importantly, come to own and hone their special talents. Thanks to their Vail Jazz mentors, nearly all of the students have gone on to become professional musicians.