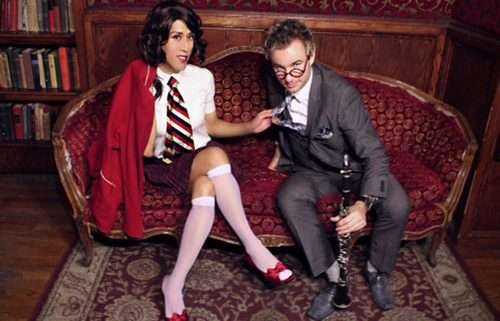 Adrian “Professor” Cunningham didn’t set out to be the master of many instruments. Growing up in Sydney, Australia, he took up the piano at age 11. He was steadily perfecting his prowess on the keys when he realized in high school that adding the saxophone to his repertoire might be “a nice way to get the chicks.” It was the early 90s, after all, and every pop band of recent years had staked their claim to cool with a sax player.

But then Cunningham’s father introduced him to jazz.

“He loved Louis Armstrong and we had all of these great 78s that we listened to together,” he recalls. “I started playing clarinet and fell in love. It became my baby.”

It wasn’t until his 20s that Cunningham added the flute to his skill set.

With each echelon of talent, Cunningham moved up the musical ranks in his mother country, joining the house band for the hit television show, Australian Idol, the Sydney All Star Big Band and being nominated for Mo Awards as Jazz Instrumentalist of the Year and Best Jazz Group.

Eager to further expand his horizon, Cunningham relocated to New York City in 2008. In addition to the long list of Australian luminaries with whom he’d performed, he began sharing the stage with American stars like Wynton Marsalis, Bucky Pizzarelli, Debbie Reynolds and Wycliffe Gordon, to name just a few.

Performing in cities across the globe, on every continent besides Antarctica with his Australian-based quartet as well as His Old School ensemble, Cunningham has played Switzerland’s famed Montreux Jazz Festival on three separate occasions and has led the saxophone section of Vince Giordano and the Nighthawks, the Grammy- winning, New York-based swing group. Now 39, Cunningham has made major strides as a composer and has recorded seven albums. His performances are typically blended with energetic instrumental and vocal numbers.

Although he doesn’t have a precise formula for writing music, when the mood strikes him, he can’t shake it.

“I go through phases. When I get into a composition mode, it takes over. I was just back in Australia with my long-time quartet and I was obsessively doing it. It’s very much an emotional place I have to be in. A lot of what I write is inspired by my travel.”

As far as said travel, Cunningham’s most memorable gig is surprisingly not one of his Montreux Festival performances or a big night at Lincoln Center, but an impromptu set in Africa before he was even a professional musician.

“We were backpacking and camping in Botswana and our tour guide said, ‘I have a place to show you.’ We went into this jazz club in the middle of bushy Africa. The band playing was all African guys. Somehow they got the notion that I was a musician. We couldn’t communicate with words but played jazz tunes. We could communicate through music. These guys weren’t polished musicians. They didn’t have the techniques that First World countries have. But it was amazing. The spirit was just magical.”

When it comes to connecting with people these days, Cunningham – Professor Cunningham, that is – has kindled a fiery energy with His Old School, a New York City-based, New Orleans-inspired ensemble that has firmly etched its mark on the international swing scene, winning Best Band, Best Horn Section and Best Rhythm Section awards at the 2016 International Swing Band competition in Madrid, Spain.

Swing dancing has become a natural supplement to Cunningham’s shows, and of course, a skill that the Professor himself has notched onto his resume.

“Connecting with dancers on a musical level is one of the highest [rewards] you can have playing jazz,” he says. “It’s such a great compliment to this music. Not only is it great to watch them get affected by what we do, but how I play has changed. I’ve learned to swing dance myself and I’m pretty good.”

That’s not to say it’s easy, though. Cunningham admits that his dance moves max out at two songs.

“I can tell you, what they do is so hard. But it’s made me more attentive to the rhythm, how I play rhythms as a soloist,” Cunningham says. “If you’re improvising in terms of ‘how would I react to this if I were dancing?’ you’re trying to connect with people on a physical level with the tempos and what feels good on the dance floor and also on a listening level.”

Whether playing to a room of swing dancing couples or a rapt seated audience, Cunningham revels in speaking through his common, cosmic language.

“Jazz seems to have a recurring life of its own,” he says. “It’s accessible to everyone, the older crowds, the younger crowds, the swing audience. The language has become more sophisticated. It’s not as easy to get straight away, but it’s something that we all understand.”