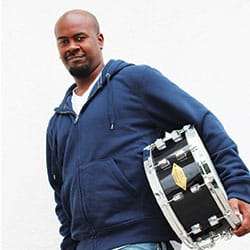 Born and raised in LA, Jerohn began playing drums at the age of three at his local church.  Influenced by a host of great Gospel drummers, Jerohn has achieved equal renown as a bass player and producer as well.   He has performed with Mariah Carey, Patti LaBelle, Justin Bieber, Natalie Cole and many others, and he has also logged appearances on the Grammy® Awards, Tonight Show, Late Show, Oprah, and Ellen.  Jerohn appeared in the movies Dream Girls and Church and is currently playing with jazz saxophonist Gerald Albright.