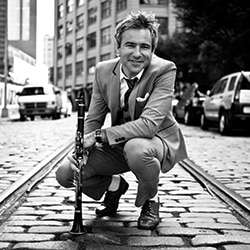 Originally from Sydney, Australia and now based in NYC, Adrian is equally fluent in saxophones, clarinet and flute.  A fixture on the NY jazz scene, he has performed at many prestigious clubs and festivals with such luminaries as Wynton Marsalis, George Coleman Jr., Bucky Pizzarelli, Chris Potter and Renee Marie.  His playing can be heard on the soundtracks for Boardwalk Empire and The Aviator, in addition to his seven CDs and several DVDs.  Recently he has been performing with renowned trombonist Wycliffe Gordon, including gigs at the London, Newport, Bern and Johannesburg jazz festivals as well as on two of Wycliffe’s CDs.  Adrian plays regularly throughout the US with the Adrian Cunningham Quartet and is one of the most in-demand freelance musicians in the US.