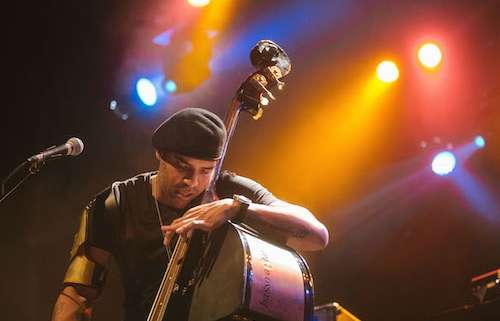 A pioneer participant in the workshop, 25 years later Mosley is one of America’s top upright bass players

At age 16, Miles Mosley couldn’t have positively imagined the extent of his success yet to come: performing at Red Rocks or touring the world doing what he loves – playing music. While attending the very first Vail Jazz Workshop back in 1996, the young musician did get some inkling that something magical was transpiring … and it certainly instilled a powerful taste of what his future held.

“To be able to get on a plane and go fly somewhere to make music was an amazing opportunity in itself,” Mosley said in a recent interview with Vail Jazz’s Connor Williams. “I didn’t come from a wealthy family. I certainly didn’t come from a family that did a ton of traveling, so to be able to go to a camp was an affirmative experience because it made it feel real. It felt like music can actually take you somewhere. That’s an important feeling confidence-wise to have as a high school kid who doesn’t know how to feel about anything.” 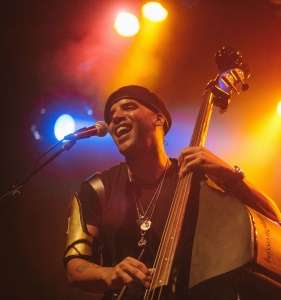 Now 39, the upright bass player who grew up in Los Angeles learned a lot of things during the week he spent in Vail back in 1996. Learning from Vail Jazz Workshop founder and fellow bass aficionado John Clayton and a team of pro mentors, Mosley made discoveries about himself and his musical talents that he had never before realized. He was one of 10 teenage musicians participating in the workshop. Celebrating its 25th anniversary in 2020, the Vail Jazz Workshop hosts a carefully selected group of 12 top young musicians from across the country for 10 days of intensive, play-by-ear learning with a team of musicians that in addition to John Clayton, has included Jeff Clayton, Lewis Nash, Wycliffe Gordon, Terell Stafford and Bill Cunliffe. The workshop culminates with student performances during the Vail Jazz Party – launched by Howard Stone the year before Mosley arrived in 1995 – over Labor Day weekend, sharing the stage with a roster of A-list jazz musicians from all over the world.

“It was encouraging to be creative and express yourself on top of learning what you learned from the group. We played a song that ended with … ‘ba ba da da da da ba’ and we walked off the stage,” Mosley recalled. “We thought that was the most clever thing that has ever happened in the history of jazz. We were so proud of ourselves for thinking outside of the box. I was studying with John. It was a great experience … great experience.”

It was in Vail that Mosley met fellow teen musical prodigy Ryan Porter. The two have “been brothers in arms since then,” forming the West Coast Get Down, one of L.A.’s most popular ensembles.

“The immersiveness of [the Vail Jazz Workshop] allowed for a lot of sharing of ideas not only with my peers but with legends and heroes and professors and people who have really changed what was possible in [jazz],” Mosley said. “To be able to be in a room constantly surrounded by people at the height of their abilities and your heroes, whether it’s a basketball camp or a spelling bee convention or a jazz summit like Vail Jazz, it changes people’s lives … kids’ lives.”

The experience set the path for West Coast Get Down, whose genre-defying, “out-of-the-box” sound exemplifies the creative approach for which Mosley feels he has, in part, the Vail Jazz Workshop to thank.

“The music can begin to envelop all of the styles that we love. Cameron Graves loves

death metal. When he sits down and plays the piano, no matter what he’s playing, there’s death metal in it. I love Joni Mitchell and Jimi Hendrix and Otis Redding, and when I play the upright bass, that stuff is gonna leak in. Kamasi Washington loves Snoop Dogg. It’s gonna leak into the music. I think there’s this perfect storm of we learned jazz and we studied it properly and we show respect to it and we show honor to it, to where it came from, what it is, what it’s going to always be and then we contextualized it into our experience of the world,” Mosley said. “We held a mirror up to society to reflect that and it came out in our music.”

In addition to his work with West Coast Get Down, Mosley composes scores for film and TV and has shared the stage or recorded with Cee Lo Green, Chris Cornell, Lauryn Hill, Rihanna, Korn and many more standout stars from every imaginable musical style. His most recent solo release – “Brother” – is a single on which he performs vocals and bass and provides a glimpse of his forthcoming album, slated for release later this year.