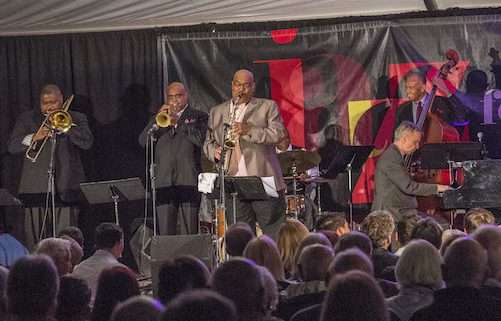 In its 24th year, the summer grand finale over Labor Day weekend has become famous for its rare fusion of talent.

When you see an artist perform live you’re naturally moved by their talent – by the way they’re able to mix up their regular numbers, extend solos, improvise. How about if you rotated 35 of the world’s most talented musicians on and off of stages with one another for four days and nights of live performance? There would be some unforgettable sparks.

Such is the format of the Vail Jazz Party over Labor Day weekend. In its 24th year, the multi-day live music experience was originally cast on the extravagant, one-off whim of Vail Jazz founder Howard Stone.

“It all started with too much wine in 1995,” Stone recalls. “We had some of the greatest musicians on the planet there. It was pure … spontaneous.” 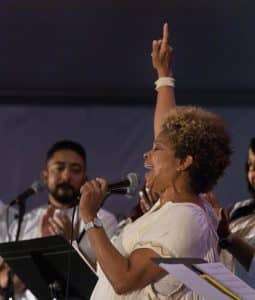 Niki Harris belts it out during the 2017 Gospel Prayer Meetin’. Photo by Jack Affleck

At the end of the weekend, a happy hangover of inspiration and euphoria prevailed. John Clayton asked Stone if he would ever do it again. Before the idea had even solidified in his own head, Stone answered, “this is what I’m going to do for the rest of my life.”

Now, 24 years later, the Vail Jazz Party has established itself as one of the world’s premier jazz gatherings, still replete with star-studded lineup (more than 35 headlining artists) and a contagious aura of exaltation that participating musicians swear taps into some sort of higher power.

“At the party last year from beginning to end I felt like somebody gave me magic,” says Japanese organ virtuoso Akiko Tsuruga, who recently closed out the 2018 Vail Jazz @ Vail Square series. “I felt very strong energy from so many musicians. I was always crying … it was a very, very great vibe. I’ve never had that experience before. That four days in Vail was the best I’ve ever played; the best experience of my life.”

Highlights of the 2018 Vail Jazz Party:

As the creator of the score to West Side Story and musical director of the New York Philharmonic, Leonard Bernstein stands as one of America’s most revered conductors and composers. His legacy has been honored by numerous fellow musical greats. One of these is Vail Jazz Party House Band pianist Bill Cunliffe, who won a Grammy Award for his arrangement of Oscar Peterson’s “West Side Story Medley.” Cunliffe will be joined by fellow House Band members John Clayton and Lewis Nash as well as guitarist Peter Bernstein (no relation to Leonard) for what is sure to be a lively, one-of-a-kind exploration of the Leonard Bernstein songbook.

Master of groove, Jimmy Smith single-handedly rendered the B-3 organ a cool instrument, especially in the world of jazz and blues. Viewed by many as the world’s organ king, he mentored contemporary keys king Tony Monaco, who has gone on to become recognized as one of the top five international jazz organists himself. Don’t miss the soaring and swelling melodies on tap for this heart-felt tribute.

Did someone say dance party? What better way to spend Sunday afternoon on Labor Day Weekend … Nu Funk is a movement that originated in Brooklyn in the 1980s, blending hip hop and deep funk with danceable riffs and climatic breaks. Internationally lauded (not to mention Vail favorite) trombonist pegs Nu Funk to hits from James Brown, Stevie Wonder and Marvin Gaye. It’s bound to be a party.

The Sessions – Friday through Monday

The morning, afternoon and late-night sessions throughout the Vail Jazz Party feature unlikely fusions of artists who have often never met, much less performed on stage together. This is when the real magic happens.

“It’s an opportunity for each player to express themselves in a way that leads to something else, that leaves room for self-expression from every player,” explains Stone, whose musical matchmaking skills have become legendary at this point. “It’s a breakthrough moment in a jam session when someone is musically communicating and the other person says, ‘wow, I never thought of that.’ It takes someone – everyone – to places they’ve never gone before.”

From Aug. 31 to Sept. 3, the Vail Jazz Party features more than 70 musicians delivering special performances, tributes and jam sessions. Tickets to individual sessions start at $55 and weekend passes are available. Performances take place at the Vail Marriott and in the all-weather Jazz Tent in Lionshead’s Vail Square.

Get tickets to all sessions here.