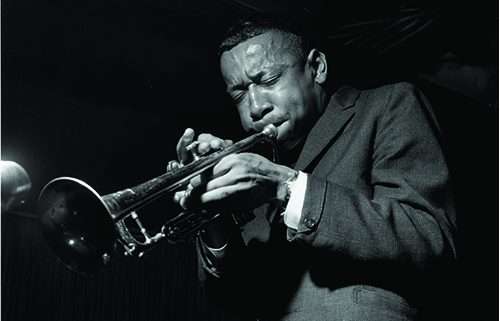 Edward Lee Morgan was born in Philadelphia, PA on July 10, 1938. Lee as he was known, received a trumpet on his 13th birthday and for the rest of his life his identity would be bound up in the three valves and 4 feet 10 inches of tubing comprising his horn. Lee would become one of the greatest players in the history of jazz, combining a technical virtuosity that allowed him to play scorching and powerful passages, with each note precisely articulated, even in the highest register of his horn, with a sensibility that allowed him to play some of the most tender ballad solos in jazz. He would also go on to compose may great tunes and would transition from hard bop (bebop with influences from r&b, gospel and blues) to an avant-garde/modal style.

Lee began playing professionally at 15 and by 18 he was playing with the jazz giant Dizzy Gillespie and his big band and was signed to Blue Note Records, one of the top jazz labels of the day. Over the next 15 years he would record 25 albums as a leader for the label, many becoming jazz treasures that amply demonstrate his musical genius.

In 1958 Dizzy’s band broke-up and Lee made a faithful decision to join Art Blakey’s Jazz Messengers. Musically the decision was brilliant as the band was led by the legendary drummer Art Blakey who had an extraordinary track record of choosing raising stars as his sidemen and Lee was no exception. Being one of the most popular bands in all of jazz, Lee was able to play often as the Messengers toured the US and Europe, playing all of the great festivals and club dates everywhere. Lee rapidly developed into one of the most talented trumpet soloists in jazz and recorded numerous albums with the Messengers, several of which, “Moanin’” and “The Freedom Rider,” are in the jazz pantheon of greatest recordings.

However, the decision was to change the course of Lee’s life as Blakely was a heroin addict and he introduced many of his sidemen to heroin. Whether you call it horse, smack, dope, junk or the myriad other names it has been called, the opioid drug is highly addictive and Lee became an addict before he was 21. His addiction became so severe that in 1961 he had to leave the Messengers and return to his parents’ home in Philadelphia to try to kick the habit. He spent the next two years removed from the jazz scene in NY and in late 1963 he “took the cure” and was back in NY before yearend.

For the remainder of the decade he would perform and record, both as a leader and as a sideman, including with the Messengers. Many of the recordings were extremely well received and his biggest hit was his “comeback” album released in 1964. “The Sidewinder” crossed over into great commercial success and things were looking up for Lee, but the very sad reality was Lee wasn’t cured of anything, he just learned to manage his addiction and began substituting methadone and ultimately cocaine for the dope he had been addicted to.

By 1967 Lee was a junkie who had fallen so low that he was seen sleeping on the street outside Birdland without shoes and committing petty crimes so he could buy drugs. On one particularly wintery night that year Lee had sunk so low that he had pawned his horn and top coat for some drugs that he desperately craved and once again he came to a crossroads in his life. This time it was “Helen’s Place,” the apartment of Helen More, whose abode was a haven for strung out jazz musicians. Helen was a jazz fan who had a checkered past and had moved about the fringes of the jazz-drug culture for a number of years, working in Harlem for drug dealers, but a non-user. She was 22 years Lee’s senior and on that faithful evening she took Lee in, got his top coat and trumpet out of hock and for the better part of the next 5 years managed him professionally and personally. Eventually she would take the name Morgan and they were seen as husband and wife, although they never married. Part mother, part wife, part manager, Helen was the ever present force in his life, and although he continued to be an addict, she made sure that he showed up to his gigs and performed. Lee’s niece would later say: “It was like Helen was addicted to him.” Whatever the reasons the relationship became extremely toxic and Lee began to pull away from her and by 1971 he began to see another woman, staying away from Helen for prolonged periods of time and she stopped coming to his performances. Helen unsuccessfully attempted suicide and the relationship was clearly over.

In the early hours of February 19, 1972 Lee was performing at the NY club Slug’s, his new lady friend was seated at the table Helen previously had held court at. Helen entered the club and after an altercation with Lee she shot him once in the chest. He was 33 and in a fit of jealousy Helen had done what 15 years of drug addiction didn’t do, killed him, one of the greatest trumpet players in the history of jazz.

On Sunday evening, September 4 at the Vail Marriott Mountain Resort as part of the Vail Jazz Party we are pleased to present the great trumpeter Terell Stafford in a performance in which Terell will reprise his critically acclaimed recording of the music of Lee Morgan,“BrotherLee Love.”

Shake it with ‘Maraca’ this Thursday