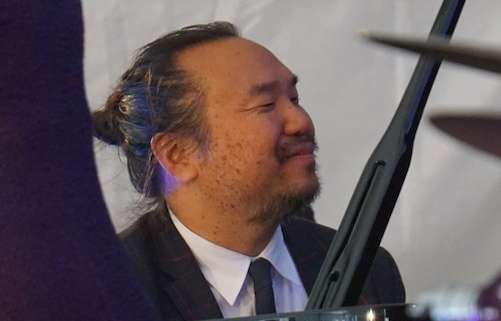 John Chin is a humble guy. Although he’s had a Grammy nomination and has been lauded for his musical talent since he was a young boy, he’ll tell you he was no child prodigy.

A Korean-American growing up in Los Angeles, Chin recalls his first encounter with a piano, but is sure to emphasize that he was not beckoned to it by any sort of guiding light.

“My parents always had a piano even though they didn’t play. They were classical music fans. They told me I gravitated to it, but it’s not uncommon if you have little ones in the house that they make their way to the piano,” he says.

Nonetheless, his parents nurtured his interest and set him up with a piano teacher by the age of 4 or 5. Chin’s first public performance was in kindergarten, but that, too, he is reluctant to regard as a milestone.

“It wasn’t a formal performance,” he says. “It was just me getting up there and playing. I just remember there was a piano in the classroom. I don’t remember what I played … ‘Mary Had a Little Lamb’? Maybe it was the one that comes after that. I think I could read music before I could read English.”

That last part tells you something. Also, the fact that the young pianist’s gift was recognized by California State University, where he was admitted at age 14 and graduated with a B.A. in music at age 19 before continuing on to a masters program at Rutgers University under the great pianist Kenny Barron and pursuing an Artist Diploma at Juilliard, eventually becoming a fixture in New York City’s jazz scene.

“My sequence of early music education was not typical for an American kid,” Chin says. “Classical music was a part of my childhood, but I wouldn’t consider myself to be any good at it. I think it was really the pursuit of playing by ear when I was 12 or 13 and getting better and better at it that motivated me. That’s how I discovered this jazz thing.”

Jazz was nonexistent in Chin’s childhood home, so he’d save money to go to the record store, choosing blindly depending on what album cover looked jazzy or which featured a picture of a pianist.

“Somehow down the line, I started learning how to play things by ear and off the radio – simple things. That’s when I made up my mind that jazz was the ultimate music for an ear player,” he says. “There was an inherent sophistication to the music. When I first tried, though, I couldn’t do it. It was too sophisticated.”

According to Chin, his early days attempting to play jazz were a struggle.

“I couldn’t hear the harmony. The lines were so fast and complex,” he says. “Listening to Charlie Parker or any of the great sax players, they’d put in so many notes and go so fast. In my mind I thought, it’s impossible they know what they’re doing. I’d get on the piano and move my fingers as fast as I could and it sounded terrible. It was then I realized they knew exactly what they were doing … every single note. It blew my mind. I found myself yearning to achieve this ultimate music. I yearned to have a grasp on it.”

By all counts, Chin has managed to find that grasp. He’s released four albums as a band leader and has recorded or shared the stage with artists such as Benny Golson, Ron Carter, John Ellis, Dayna Stephens and Mark Turner, to name just a few. He has toured extensively with Vail favorite Rene Marie and his piano work was nominated for a Grammy on Marie’s 2017 Sound of Red album. His versatility in moving between complex styles – not only those under the jazz umbrella such as bebop and swing, but also hints of classical and pop – have been revered by audiences and music critics across the globe.

Returning to Vail on March 26 for his debut performance as a bandleader (he performed as sideman with Rene Marie on two previous visits), Chin and his trio highlight the music of Duke Ellington and Billy Strayhorn, who he refers to as “timeless” and whose numbers have found their way into his performance for decades. When it comes down to describing the style of his own compositions or the flourish he adds to the classics of icons such as Strayhorn and Ellington, Chin is once again self-effacing.

“The jazz musicians that have come before me, that have carried on this music, a lot of my playing comes from that tradition, but with the idea of pushing the envelope at the same time,” he says. “I believe that a part of the tradition is to push the line and have a progression. I’m constantly a student but also an artist creating something new. Also, I’m always reaching for being in the moment as much as possible, being in a state of flow. When you kiss somebody for the first time, it’s like that. That moment is so real and you can’t think of anything but that moment. I want to be aware of the exact moment I’m in, to reach the state of flow. That leads to consciousness and freedom and living.”

John Chin is joined by Sean Conly on bass and Darrell Green on drums to perform two riveting sets featuring the music of Duke Ellington and Billy Strayhorn. Performances take place at The Vail Sonnenalp Hotel. Seating is jazz club style in Ludwig’s Terrace with full dinner and bar service available (a $30 food and beverage minimum applies). Doors open at 5 p.m. for the 5:30 p.m. performance and at 7:30 p.m. for the 8 p.m. set. Tickets to each performance are $40. For more information, call 970-479-6146.

Get tickets here to the 8 p.m. performance.

A Letter from our new Executive Director, James Kenly Scroll to top