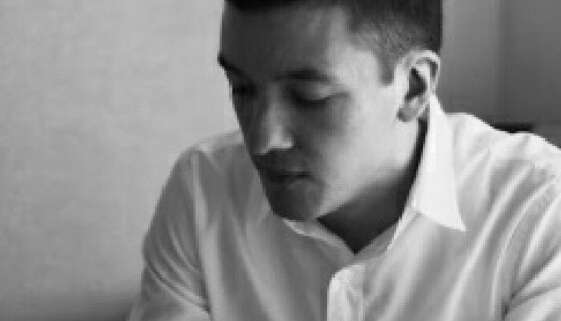 Jazz pianist and teacher John Austria is humble. So humble, that to this day he assumes he was accepted

into the 2001 Vail Jazz Workshop by fluke: “I think I may have been a second choice…someone dropped out and I was accepted.” Given his solid grounding in music, starting at an early age, and his inarguable talent on keyboards, it’s hard to imagine Austria ever being “second best.”

Austria grew up in New York, surrounded at home and at school by a rich musical culture. His parents met at the Manhattan School of Music and infused in their three children the love and importance of education, exploration, and performance. His father, a professional bassist, nurtured the love of jazz in his youngest child. As John told Vail Jazz board member JoAnn Hickey: “My father was from the Philippines, but when he heard Thelonious Monk on the radio it was mind altering. That’s what made him come to New York. He was always gigging and sometimes he would sit down and teach me.” Monk’s “Straight, No Chaser” was the first jazz song young Austria learned to play.

Austria attended LaGuardia Arts High School in Manhattan, where he learned of the Vail Jazz Workshop, and it became his first musical learning experience outside of New York. “The level of musicianship was so high, I didn’t feel I belonged there,” Austria reflects. “Those first couple of days, I was pretty blown away. It was great hearing different styles from around the country, regional sounds and dialects.”

By the time he returned to New York, Austria’s confidence had soared. He credits the weeklong Workshop for helping him become a more accomplished accompanist and for instilling the importance of personal chemistry between band members. Although focused these days on teaching, Austria performs with several jazz quartets as well as with the West African/jazz ensemble Denbaya. “I don’t get to play with a group consistently for a long stretch of time, but I follow through with the different groups I play with. I keep connected.”

As a teacher, John Austria strives to cultivate each student’s unique musical voice, while passing on the oral traditions of the great jazz masters. Upbeat NYC, located in the Bronx, is a non-profit after school program, with a jazz program that is now in its fourth year. “The kids have been playing music for a while, so we now have enough for a small big band; they can play real charts like Ellington and Thad Jones,” he says with pride.

He carries a key value learned at the Vail Jazz Workshop­—creating a sense of family among players—into the classroom. He also believes in the importance of bringing jazz generations together, another value instilled by the Workshop. “The kids are as young as eight, then you have teachers who are gigging musicians in their 20s and 30s, and finally there’s the older generation in their 50s and 60s, who have played with everybody. The kids pick up these various nuances in the jazz language, as if through osmosis.”

Negativity, ego-driven attitudes, and unbridled competition have no place in John Austria’s world of jazz. During the Workshop, teachers set aside time to share their personal stories and one in particular stuck with him. “John Clayton spoke of playing with Ray Brown and another bassist. He spoke of the encouragement to be gained from fellow musicians and about the need to open yourself up to the love and support of each other’s playing.” He imparts this message to his youngest students and repeats it often. “As a kid, if you’re not properly counseled by the great musicians you look up to, your insecurities can lead to a cutthroat attitude,” he cautions. As the next generation of performers, Austria’s students will enter the world of jazz with open minds as well as open hearts.

The Vail Jazz Workshop accepts the dozen most promising high school musicians and pairs them with six professional jazz practitioners for a week of intense instruction. More than just music is learned. The pros impart what to expect if the young men and women enter the music life and reflect on their own experiences, including missteps. Because of the Covid-19 virus, this year’s Workshop will take place digitally in August.