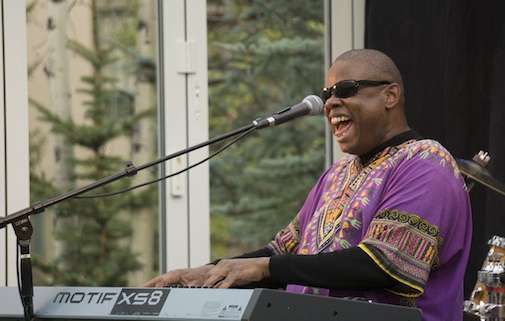 Soulful singer/pianist returns for two intimate performances at The Sonnenalp

From the first time Joe McBride touched a keyboard at age 4, he was hooked … as in, he could not let it go.

“I had gone to a Christmas party at my cousin’s house. I found my cousin’s keyboard and started playing it. I didn’t want to leave,” said the Fulton, Missouri native. “I cried for three, four days when we left. My parents broke down and bought me a keyboard.”

Four years later, the gift was a piano, purchased for an 8-year-old McBride by his church.

As a teenager, McBride contracted a degenerative eye disease that would eventually take his eyesight. But that did nothing to slow musical pursuits.

“There are always those with greater than or lesser than,” he says. “I don’t think because I was blind I concentrated more on music. It’s because I love it. There’s plenty of blind people, a lot of adversities that a lot of people have, it doesn’t have to be physical. Your passions have to do with who you are as a person.”

After studying at Webster University in St. Louis and then in North Texas, McBride spent the next three decades creating and recording music and touring the world as a bandleader.

“As I grew older, I’d fall into my own groups, getting out in St. Louis and meeting other musicians. The more I got to interact with people, the more I realized how many different kinds of music I love.”

McBride made his way to San Diego and Dallas, quickly establishing himself as a respected and sought after singer/pianist in each city’s jazz scene. From 1992 to 1998, he recorded four albums – Grace, A Gift for Tomorrow, Keys to Your Heart and Double Take, featuring contributions from greats such as Larry Carlton, Dave Koz, Rick Braun, Peter White and Grover Washington, Jr., to name a few.

He’s opened for stars such as Whitney Houston and The Yellowjackets and recorded a total of nine full-length albums, including 2009’s Lookin’ for a Change, a testament to his musical versatility, as he infuses a broad gamut of popular tunes from numerous genres (Coldplay, John Mayer, Gnarls Barkley) with his own vocal and harmonic style. Whether personally revamping a contemporary pop tune or performing a Ray Charles classic with a smooth and distinctive flare that’s all his, McBride embraces every opportunity to grow.

“I have so many different influences – Ray Charles, definitely – but also Beethoven, Bach, Jimmy Hendrix, Ella Fitzgerald and even Green Day,” McBride says. “As a kid I was exposed mostly to rock n roll. At my grandmother’s, she’d always have Ray Charles in the background. In college, it would be part of my assignment to learn about different artist. I’m old now … but I’m timeless, baby.”

McBride is often compared to Ray Charles, though anyone who’s heard and witnessed his performance – including last summer’s Vail debut, a charismatic tribute to Brother Ray – knows that McBride takes the stage with his own distinctive energy and presence.

“I’m not acting to perform as Ray would. People can get caught up in the stereotype … yes, I’m a black, blind person who sings and plays the piano,” McBride says. “I’m more influenced by Ray as a style, being able to cross over and play with so many kinds of musicians. He came on the scene back in the early 50s, when he pretty much just kept to gospel. Then came the R & B and the big band stuff with Count Basie. He even did country with Willie Nelson and Merle Haggard. He influenced a lot of styles. I probably have a hundred influences. All of them are with me, but my show is always my own.”

Joe McBride returns to Vail for back-to-back performances at The Sonnenalp Hotel on Feb. 26, highlighting classics by the likes of Ray Charles and Stevie Wonder as well as McBride originals. Seating is jazz club style at Ludwig’s Terrace, with doors opening at 5 p.m. for the 5:30 p.m. performance and at 7:30 p.m. for the 8 p.m. show. Full dinner and bar service will be available (a $30 food and beverage minimum applies). Tickets to each performance are $40. For more information, call 970-479-6146. 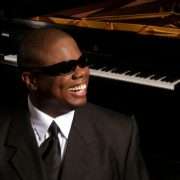 A tale of two geniosities