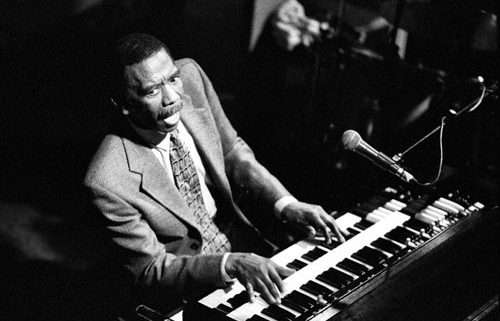 Most of us associate a pipe organ with church, but well before the Ninth Century when pipe organs were first used in Western liturgical music, they were played while gladiators battled in the arenas of the Roman Empire. By the Middle Ages, large pipe organs were installed in important cathedrals in the West, but due to their size, complexity and cost it was centuries before they were commonly found in churches and even later in theaters and concert halls. That all changed in 1935, when the Hammond electric organ was invented by Laurens Hammond as a low-cost alternative to the wind-driven pipe organ.

Initially Hammond’s company sold organs to churches and his Model A soon could also be heard at skating rinks, movie theaters, baseball parks and on the radio as the soundtrack for soap operas. Extremely popular in black churches in the South, it quickly became a mainstay of black gospel music. Over time, the Hammond organ became a staple in jazz, blues, soul, rock, reggae and even country. Although many different models of Hammond organs were produced, the B-3 model (only manufactured between 1955 and 1974) became the gold standard when an organ was called for. Today a “mint” condition B-3 sells for three to four times its original list price of $2,365 in 1955, which doesn’t sound like much now. But at the time, you could buy a new Chevy Bel Air for $2,200.

B-3s are usually paired with a Leslie (named after its inventor, Don Leslie), which is an amplifier in a sound cabinet placed next to the organ. Ironically, Laurens Hammond opposed the combination, but it was jazz players that decided that using the Leslie was what gave the B-3 its distinctive whirling/swirling sound, known as the Doppler effect – the sound you hear as the source of a sound moves towards you and then passed you. The Leslie is able to create this unique effect by employing spinning treble horns and a stationary woofer with a spinning rotor.

B-3s have two keyboards called manuals (the upper one, the “swell” and the lower one, the “great”), each containing 61 keys, 36 drawbars and each with eight separate stops. By pulling out combinations of drawbars, the tone emitted when a key is struck can be altered. What may have sounded like a flute with one setting would then sound like a marimba with another setting. A player therefore can create millions of sounds.  Paul Shaffer of David Letterman fame succinctly said, “Within the drawbars of the B3 lies the secrets of the universe.” Many B-3 players agree and go to great lengths to conceal their drawbar settings.

There are additional keys, switches and pedals that empower the organist to add in special effects, adjust vibrato, control the volume, and employ many other sonic qualities. Finally, there is the pedalboard on the floor for playing bass notes. Containing 25 wooden keys arrayed like a keyboard, it is played by the organist’s feet. It is often joked that the pedalboard has put many bass players out of work!

Even though keyboards and synthesizers now dominate the world of music making, nothing sounds quite like a B-3, which among organ fans has taken on an aurora of an iconic symbol of a rich musical past. It’s similar to the way Harley-Davidson disciples wax poetically about their hogs. Altogether, the B-3, pedalboard, bench and Leslie weighs in at 525 pounds. Known as the Beast among organ fans who liken it to “a pipe organ on steroids,” it takes a master to tame the Beast, but in the hands (and feet) of a great player, it can be made to sound like a big band, a dozen horns, a flute, growl and squeal. And of course, it can make you feel like you are in church.

It took a while for jazz musicians to embrace the Hammond organ, but several well-known jazzmen began to play it in the 1930s. In the world of jazz organ, there is the Pre-Jimmy era and the Post-Jimmy era. The former was the period before 1955, when “organ jazz” was not that popular … with one exception. Wild Bill Davis, a jazz pianist and organist, began to explore the music possibilities of the B-3. Davis was the bridge and inspiration for James Oscar Smith, a Philadelphian pianist turned organist who burst onto the scene in 1955.  Self-taught, Jimmy explored the myriad possibilities of the B-3 and developed a technical command of the instrument and a musical approach that allowed him to combine gospel, blues and bebop and singlehandedly (actually he used both hands and feet) create a jazz genre that inspired generations of musicians that followed, whether they played jazz, blues, R&B, pop or acid jazz. Known as “God” by jazz organists, Miles Davis called Jimmy “the eighth wonder of the world.” Some called his music “soul jazz” and others called it “grits and gravy,” but it didn’t matter what it was called. It had an unmistakable groove and for the next five decades, Jimmy was the master that tamed the Beast. A true innovator, Jimmy received the NEA Jazz Master Award, the highest honor that an American jazz musician can be bestowed. He was a prolific performer, who played with most of the jazz greats of the last half of the 20th century. When he died in 2005, he left behind an extensive catalog of recordings that are musical treasures.

Jimmy inspired many players, but one in particular – Joey DeFrancesco, also from Philadelphia – was fortunate enough to meet Jimmy when he was only 7 years old and already playing the organ. Jimmy became a life-long mentor to Joey and in turn, Joey has carried on the great B-3 tradition and imparted a Post-Jimmy era of the B-3. Vail Jazz will present Joey in concert at 6 p.m. on Aug. 24 in the Jazz Tent at Vail Square in Lionshead. Come hear the B-3 in all its glory!