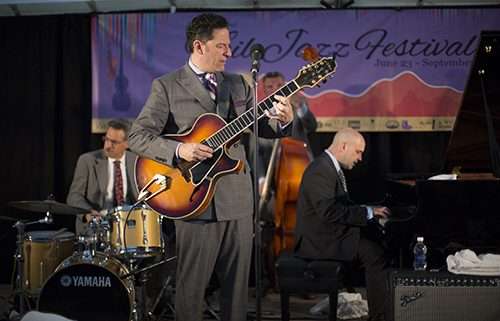 When impersonating his father, famed guitarist Bucky Pizzarelli, John Pizzarelli adopts a raspy voice with a strong Jersey accent. He speaks of his father with a tone of equal parts humor and adoration.

Coming from one of the most talented, harmonious families in jazz history, there was never any pressure for John to take up music as a young boy. He was never pushed to follow in the footsteps of his father, but Bucky has certainly played a part in refining his son’s skills, even when it comes to hitting the most complicated bridges and transitions on the guitar.

“If you don’t do it right, he looks at you and makes that face and shakes his head,” John says.

Growing up surrounded by instruments and talent, playing music was pure fun for John and everyone else in the house. It didn’t hurt that the revolving door was frequented by folks like Benny Goodman and Clark Terry.

“It was very easy. We had all the guitars and all the equipment,” says John, who returns to Vail July 13 for an intimate performance at Vail Jazz Club Series and then takes the big stage in Lionshead July 14 for Vail Jazz @ Vail Square, performing with his brother Martin on bass, Konrad Paszudzki on piano and Kevin Kanner on drums.

“The house was one big instrument room. There was always some kind of music going on – my father playing, rock bands in high school … It’s always been enjoyable to me. Never like a job.”

Although he is known to sing and play hypnotizing renditions of classics from The Great American Songbook, Pizzarelli often performs pop songs by the likes of Neil Young, Joni Mitchell, Elvis Costello and The Allman Brothers, to name a few, infusing each selection with an effervescence of unique harmonies, mash-ups and frolicking string work. His latest studio album, Midnight McCartney, is a collection of lesser-known Paul McCartney songs and was co-produced by John’s wife, singer Jessica Molaskey, featuring contributions from Bucky. The brainchild behind the record was the ex-Beatle himself. Pizzarelli had collaborated with McCartney in the past, not to mention covered a portion of his repertoire on his 1996 release, John Pizzarelli Meets The Beatles. But when Sir Paul wrote to suggest (apologetically admitting that it might seem “immodest” or “pushy”) that perhaps Pizzarelli could lend his magic to some of his post-Beatles’ melodies, Pizzarelli could hardly say no. He dove into 45 years worth of McCartney’s discography and unearthed a selection of tunes he could re-harmonize with that special zing.

We started to realize how brilliant these songs are. He’s obviously a rock ‘n’ roller, but they were really easy to break down.

“When I did the Beatles record in 1996 (Meets the Beatles), I found you can really re-harmonize that stuff, find nice harmonies and not get too crazy. That’s the challenge and the fun of the whole thing.”

“We started to realize how brilliant these songs are,” Pizzarelli says. “We’re McCartney fans and this is our way of letting people know these are good songs.”

When it comes to performing with his brother and the rest of his quartet, Pizzarelli cherishes the band’s ability to instantly read one another.

“The thing I like about having the group is when you go, you can have a set booked and arrangements and you’re able to do whatever you want to do at a moment’s notice,” he says. “It’s nice to have music you’re always prepared for. It doesn’t have to be the same every night.”

Although Bucky still has his own performance schedule, John tries to play with his father whenever possible and when the holidays roll around at the Pizzarelli household, he says, “all hell breaks loose.”

Some of his most memorable moments on stage include performing with the likes of McCartney, James Taylor and Natalie Cole who Pizzarelli describes as “generous, beautiful people.” Of course one of his big breaks as an artist was opening for Frank Sinatra in the early 90s, when he took the stage to crowds of 15,000 to 20,000, an experience he described during his appearance on Voice of America’s Beyond Category series, as surreal.

“You’re just sitting out there thinking, where are these people coming from? Then you’re looking in the wings and there’s Sinatra snapping his fingers,” he said.

Don’t miss John Pizzarelli as he takes the Vail July 13 for an intimate performance at Vail Jazz Club Series at its new location in Mountain Plaza Lounge. Doors open at 8 p.m. and music starts at 9 p.m. Tickets are $40 in advance. The quartet, including Pizzarelli on vocals and guitar, his brother Martin on bass, Konrad Paszudzki on piano and Kevin Kanner on drums then takes the big stage for Vail Jazz @ Vail Square from 6 to 8 p.m. on July 14 at the all-weather jazz tent in Lionshead. Tickets are $20 for general admission or $40 for premium seating. For tickets or more information visit vailjazz.org or call 888-VAIL-JAM.

The Great Ladies of Song