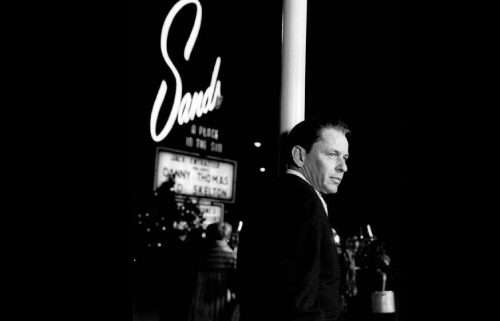 There have been many famous streets in the U.S. that have been synonymous with a style of music. In New Orleans it was Basin Street for the nascent sounds of jazz, Beale Street in Memphis for the blues, 18th and Vine for swinging jazz in Kansas City, Central Avenue in L.A. and 52nd Street in New York City for bebop, and of course, Broadway in NYC for what else but “Broadway music.”

In Las Vegas, N.V. there is the Strip, a 4-plus-mile-long desert road, not associated with a particular style of music, but instead the entertainment capital of the world. Nevada was the first state to legalize gambling in 1931, but with the Depression underway, Vegas had to wait for better economic times and the end of World War II before it could become Sin City. By the early 1950s, the mob controlled the hotels with their extremely profitable casinos and much of the vice in the city as well, and Vegas took off. Gambling, bookmaking, prostitution (ultimately banned from Clark County where Vegas is located), 24-hour entertainment, food and booze, easy marriages and divorces, strip shows and much more, all of which ultimately led to the famous slogan: “What happens in Vegas, stays in Vegas.”

With gambling at the heart of the economy, entertainment became the “hook” to bring in the “losers” and the best way to attract them was to present the greatest entertainment of the day. Beginning in the 1950s the competition among hotels to feature the biggest draws in their respective “showrooms” was fierce and headliners that could draw a full house were handsomely rewarded. With Hollywood nearby, Vegas developed a connection to the world of celebrities and they were frequent visitors and performers on the Strip. Initially, the entertainment offerings were centered on lavish floorshows and reviews, comedians and vocalists. Whether singing pop, country, rock, or jazz, the greatest singers of the past 70 years have appeared on the Strip and in the 1950s and 60s many of my then favorites regularly appeared: Frank Sinatra, Nate “King” Cole, Ella Fitzgerald, Sammy Davis, Jr., Louis Armstrong, Lena Horne, Tony Bennett and Peggy Lee, to name just a few. In 1956, a 21-year old Elvis had a two-week engagement in Vegas and bombed, but ultimately returned for many successful engagements and the filming of “Viva Las Vegas.” Today, Elvis impersonators can still be seen wandering on the Strip.

Many observers believe the golden age of the Strip was a period roughly half a decade long in the 60s when “The Rat Pack” held court in the Copa Room (400 seats) in the Sands Hotel. The iconic leader of the quintet was Frank Sinatra, joined by Dean Martin, Sammy Davis Jr., Joey Bishop and Peter Lawford, all donning tuxedos with drinks in their hands, smoking on stage and generally projecting the image of being cool, ’60s style. The combination of great vocal talent (Frank, Dean and Sammy) with off-color humor, dancing (Sammy) and a swagger that was the personification of hipness, made their performances the “main event” and the biggest draw in Vegas. Backed by top bands, vocalists reigned supreme during this period and there was a magical atmosphere in the Copa Room where audiences were able to see the best perform in an intimate environment that defined the era. In 1966, Sinatra appeared in the Copa as a solo act and recorded his first ever live album, “Sinatra at the Sands,” with Count Basie and his 20-member band, conducted by Quincy Jones. The album is the definitive recording of this epoch and it captures what a night on the Strip was all about, with some of the swingiest music ever recorded, including Sinatra classics “Come Fly with Me” and “One for My Baby (And One More for the Road)” and a comedy monologue by Sinatra, known as the “tea break.”

As the 60s unfolded, rock musicians began to eclipse the jazz/pop stars of the day – the Beatles, the Rolling Stones, Elvis, the Who, Simon and Garfunkel and many others took center stage. In 1964, The Beatles made their only appearance in Vegas. Originally planned as a one-off concert on the Strip in the 700-seat Conga Room in the Sahara Hotel, the overwhelming demand for tickets ($2, $3, $4 and $5) caused the promoters to move the show to the Las Vegas Convention Center with a second show added. Approximately 17,000 screaming fans attended and it changed the Strip forever. Rock concerts came of age and it became clear that Vegas would have to compete for the best talent with the promoters of arena/stadium shows, something that a 500-1,000-seat venue on the Strip couldn’t do.

The Strip had to change to meet the new competition and it did. Public corporations began to take over the hotel/gaming industry, replacing the mob, and a new economic model was developed. The “old” hotels were replaced with megaresorts (of the 25 largest hotels in the world, 23 are in Vegas) themed as ancient Egypt, Rome and Greece, as well as NY, Paris, Venice and Hollywood, and of course the Old West. These hotel/gambling palaces contained arena-like performance venues requiring much more variety in entertainment to draw larger crowds, including the new generation of entertainers, lavish spectacles, Broadway shows, impersonators, magicians and animal and circus acts (at one point, seven productions of Cirque Du Soleil were running on the Strip).

The Copa Room and the Vegas Strip of old are now just memories, but Sinatra’s album remains a testament to an era when great vocalists and great musicians could always be seen and heard on the Strip in an intimate showroom.

At 5 and 7:30 p.m. on July 25 at the Sonnenalp Hotel and at 6 p.m. on July 2 in the Jazz Tent at Vail Square in Lionshead, the great pianist and vocalist Tony DeSare will pay tribute to Frank, Sammy, Elton John and many other crooners who helped establish the Vegas Strip as the entertainment capital of the world.

The infectious draw of gypsy jazz

Tony DeSare sets his own definition of jazz Scroll to top