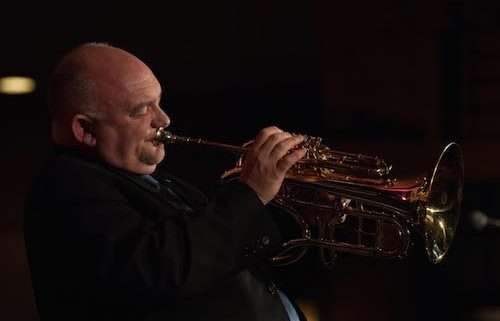 Recently I wrote a column about the joy of discovering new musicians. This is another story of a fabulous “find” – Australian James Morrison. It wasn’t until the 90s that I first heard about James, although he had already performed in the U.S. in the late 80s at the Monterey Jazz Festival when he was only 16. James grew up in a musical family in a rural area of Australia and started playing his brother’s cornet at the age of 7. By the time he was 13, he was playing professionally. He focused his early playing on brass instruments, the trumpet and the trombone primarily, as well as the piano. He studied at the Sydney Conservatorium of Music and became a member of the faculty before he was 21 and by the time he was in his mid-twenties he had established himself as an international jazz star.

Before I tell you more about James, a little background is in order. Having unsuccessfully tried on several occasions to play music (piano and alto sax), I am resigned to the fact that in this life I won’t be making music. I am not prepared to make a pact with the Devil to master a musical instrument, but I have given it some serious thought. So when I discover a great musician, I am thrilled and when that musician is a virtuoso on more than one instrument, I am in awe of his/her prowess. I think, I can’t play the alto and this musician can play all the saxophones. It isn’t fair.

Fair or not, I get it and I am resigned to the fact that you have to have an innate musical talent to play an instrument and I don’t. Further, I understand that once you have mastered the “technical” aspects of playing an instrument, a talented player can master a related instrument. But what about an unrelated instrument? When you contrast the expertise that is required to play the various popular instruments (piano, reeds, brass, stringed instruments and percussion instruments), you start to realize each group of instruments requires a specialized skill. The saxophonist uses his/her breath to create sound by blowing across a reed, while a trumpeter needs to blow into a cup-shaped metal mouth piece to vibrate his/her lips, “buzzing” them to create sound. Contrast that with the skill and talent of a drummer who can musically strike the heads of drums with drumsticks while using his/her feet to work drum pedals. Or the guitarist or bassist that needs to use both hands in a coordinate way to pluck and press down on strings to make his/her instrument sing. In addition, let’s not forget the pianist who has to use all ten digits to depress the keys on the keyboard while using his/her feet on the pedals of the piano.

Why the above segue way into an exploration of what it takes to become a multi-instrumentalist? Because that is what James is and I know of no other jazzman who can do what he does so well. By way of example, in 1990, James recorded an album with the legendary Ray Brown and Herb Ellis on bass and guitar, respectively, and with the rising drum star Jeff Hamilton. The album Snappy Doo had James playing piano, trumpet, trombone and saxophone (soprano, alto, tenor and baritone) along with clarinet, flute, flugelhorn and euphonium. On a follow-up album years later, he played all of the above plus guitar and bass. One thing is to play a multitude of musical instruments, but another is to play them in a virtuosic manner. He did. After recording Snappy Doo with James, Ray Brown referred to James as “The Genius.”

To say that James is a musical genius may be an understatement. In a three-decade-long career he has played with the who’s who of the world of jazz and pop, including Dave Brubeck, Chick Corea, Phil Collins and Chaka Khan, to name just a few. All the while bringing joy to audiences throughout the world and performing with many of the world’s greatest orchestras, including the London Philharmonic Orchestra and Berlin Philharmonic, and many more. James has appeared in some of the most famous venues in the world, including Hollywood Bowl, Royal Albert Hall and Covent Garden, plus two command performances for Her Majesty Queen Elizabeth II and for Presidents Bush and Clinton.

Everything James does, he does in a big way. He is an accomplished film and music composer (he did the opening fanfare for the Sydney 2000 Olympics), a conductor (he once conducted an orchestra composed of 7,224 musicians in a Guinness World Record Book performance), an educator (the founder of the James Morrison Academy of Music in Australia), and an instrument innovator (the Morrison Digital Trumpet). James and his wife of 30 years, the former Miss Australia, Judie Green, have three sons and the family resides in Australia.

Vail Jazz is extremely pleased to present James in concert at 1:50 p.m. on Sept. 1 in the Jazz Tent at Vail Square in Lionshead as part of the Vail Jazz Party. James has billed his performance as “James Morrison Plays The Lot.” Come see and hear James play the bugle, cornet, pocket trumpet, slide trombone, piccolo trumpet, tuba, euphonium, bass trombone, tenor trombone (both slide and valve versions), trumpet, bass trumpet and flugelhorn in what promises to be a performance for the ages.

The key ingredients to musical chemistry