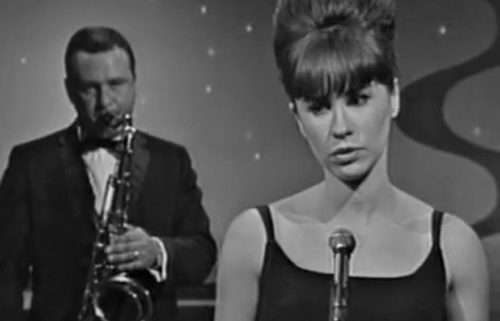 When most of us think about Brazilian music, we think about the bossa nova (the “new thing”). Nine times out of 10, the song “The Girl from Ipanema” comes to mind. What most people don’t know is there really was a girl from Ipanema. Her name was Heloisa Pinheiro and in the early 60s she would regularly pass by Veloso, a bar near Ipanema beach outside of Rio. As fate would have it, two young men were regulars at the bar and were captivated by her sensuality as they watched her each day “sway like a samba” on her way to the nearby beach. In 1962, inspired by her sexy charm, Antônio Carlos Jobim wrote the music and Vinícius de Moraes composed the lyrics of the song that put bossa nova on the world musical map. Describing her as “tall and tan and young and lovely,” they lamented that they watched her “so sadly” and would give their “heart gladly…but each day, when she walks to the sea, she looks straight ahead, not at me.”

Well, that love affair was not destined to be, but the song set in motion forces that changed the course of lives, created careers, ended a marriage, fostered an affair and changed the world of music forever.

At about the time the lovesick composers were writing “The Girl from Ipanema,” Stan Getz, a well-known American jazz tenor saxophonist, and Charlie Byrd, an American jazz guitarist, recorded the hugely successful album “Jazz Samba.” Two of the tracks from the album, “Desafinado” and “Samba de Uma Nota So” were written by Jobim (the “Gershwin of Brazil” as he became known), and were also released as singles. They garnered large radio play in the U.S. and generally are acknowledged to have started the bossa nova craze in the U.S. and ultimately the world. The two musicians had been in Brazil, had heard the sounds of bossa nova and returned to the U.S. to record an album that would feature the new music played by American musicians. The bossa nova sound can best be described as a merging of the Brazilian samba with American jazz to create a very distinctive lyrical and melodic music.

By 1963, Getz would go on to win a Grammy for “Desafinado” and the commercial success of the bossa nova sound began to gain momentum. In order to capitalize on the success of the new music, Verve Records decided to follow-up the success of “Jazz Samba” with a project featuring Getz once again (but not Byrd, as the two were feuding over the royalties from the “Jazz Samba”) and a band comprised of all Brazilian musicians that were recruited and brought to New York City. The album entitled “Getz/Gilberto” featured João Gilberto, a then rising Brazilian singer, songwriter and guitarist, with Jobim on piano. Also joining them in the recording studio was João’s 23-year-old wife, Astrud, who was there as an interpreter and his companion.

One of the tunes that was to be recorded was “The Girl from Ipanema” with João singing the lyrics in Portuguese. The story gets somewhat fuzzy at this point, since there are four separate versions of what happened next. The album producer, the legendary Creed Taylor, reported that he wanted some of the music sung in English in order to create the potential for a broader “cross-over” appeal. Since João’s English was very limited, Taylor asked Astrud to sing a verse of the song in English. The lyrics were in Portuguese, but a rushed translation was provided to Astrud. Since she spoke a heavily accented English and had never sung professionally before, she was hesitant to try, but she did.

Astrud instead reported that it was João’s idea that she sing. Getz claimed that he was the one who asked her to sing. The recording engineer Phil Ramone told a different story, saying that Astrud volunteered to sing the song when Sarah Vaughan wasn’t available as planned.

Whatever the truth, the album was released in 1964 and when the track featuring João and Astrud became the focus of radio airplay, Verve quickly decided to release it as a single and chose to edit João’s vocal portion entirely out of the cut, so it was only Astrud singing in English. What is undisputed is “The Girl from Ipanema” was a huge international hit that in fact, “crossed-over” and launched Astrud’s almost four-decade-long vocal career during which she sang in Portuguese, English, Spanish, Italian, French, German and even Japanese.

The album charted for 96 weeks and won four Grammys.

With the bossa nova craze spreading to Europe after the phenomenal success of the album, Getz arranged a six-month tour of the Continent and Astrud was asked to join him, but not João. By that time, Getz and Astrud were having an affair. By 1965, she and João were divorced.

On July 9, Vail Jazz presents its annual Gala at the Sebastian Hotel with the celebrated vocalist Carol Bach-y-Rita presenting an evening of the magical music of Brazil in a show entitled Bossa Nova Nights.