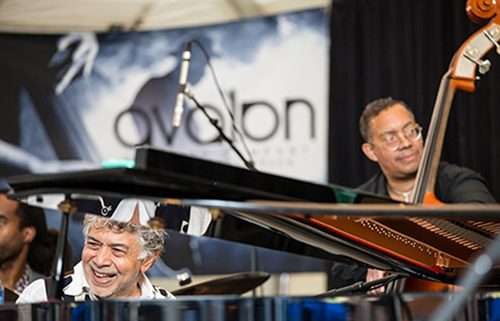 Tapping into their one-of-a-kind telepathy, Monty Alexander, John Clayton and Jeff Hamilton celebrate 40 years this Wednesday and Thursday in Vail!

Completely self-taught on the piano, Monty Alexander moved from his native Jamaica to New York as a teenager. Much to his delight, he suddenly found himself playing at Frank Sinatra’s club.

“When I played at Jilly’s in early summer of ‘63 when I was 17, I realized I was in very fast company,” he recalls. “Not just in jazz, but in all the top entertainers in show business. Judy Garland is sitting at the piano bar. I look around and Sammy Davis is walking in. I played at private events at Frank Sinatra’s apartment. He was a good friend. That crowd, they wanted to hang out until 6 a.m. I would keep it going until then. Miles Davis would come in. Count Basie was sitting there with Frank. That’s where I met Milt Jackson. I was learning so much at this time.”

Alexander began touring all over America making a name for himself.

“Then something happened,” he says. “I call it serendipity.”

A pair of students in the Midwest had more than learned his name. Alexander met John Clayton as “this skinny guy in high school or college.” The two jammed together and kept in touch as Clayton enrolled at Indiana University to study music. A few years later, Alexander’s bass player became sick before a gig in Annapolis. The pianist needed to find a quick replacement. Clayton happened to have recently graduated. Alexander said to himself, “I’ll take a chance,” and invited Clayton to perform with him. Then there was a need for a new drummer and Clayton suggested a friend from school – Jeff Hamilton. They called him in for an audition.

“Here I am now on the bandstand with these two younger guys,” Alexander says. “It was this sense of communication … I don’t know what to call it, their willingness to go along with my shenanigans. Then this thing like a fireball, like an avalanche of enthusiasm developed. We developed this great thing that you couldn’t put your finger on. That’s 41 or 42 years ago now. I still can’t explain it.”

Clayton and Hamilton know exactly what Alexander is talking about, but they, too, struggle to articulate the dynamic.

“The best I can do is say that both John and I wanted to play with Monty when we were 19 and 20 years old. We got his albums and learned all we could,” Hamilton says. “We thought if we got good enough we could play with Monty Alexander. From that experience the week of the audition, we all knew we were on the same page. We all heard the beat the same. We were all intuitive to what each other were going to do. We knew where we were going and nobody else did.”

The trio performed together all over the world, 50 weeks a year, hypnotizing crowds everywhere with their uncanny magic.

“Communication is crucial to what we do. That will be immediately evident when anyone comes to our concert,” Clayton says. “Our communication style is one that relies on focused listening to one another, eye contact, peripheral vision, facial expressions, voiced instructions, intuition and probably a good dose of voodoo.”

These days, it’s a rare treat when the three get together. When they do, they kick in right where they left off.

“I like to compare it to a family reunion,” Hamilton says. “Like if you’re sitting at the kids’ table with your cousins, telling inside jokes and having a great time, then as adults you reconnect. It’s not at the kids’ table, but the feeling’s the same. It brings a lot of joy to all of us. The happiness that occurs in the reunion, it’s pure joy and people get that from the stage.”

Because the trio has individually performed with so many other top musicians over the last four decades – Diana Krall, Oscar Peterson, Count Basie, etc – they sometimes tweak a song on stage in a momentary detour that Hamilton calls a “snafu” but which any average listener might call a blast of genius.

“There is so much knowledge being thrown around when great musicians share a bandstand. How do you hit that magical place? I’ve tapped into it in my life a few times. I seem to be able to do it all the time with Jeff and John,” Alexander says. “When John plays a note on the bass, it’s like all the colors in the rainbow. You have to tap your foot, shake your you-know-what. I love things when they have impact, when it has some oomph. There is no more oomph than Jeff Hamilton. If anybody does anything at any time, it’s a magical symphony. Going back to the early days, almost every time we hit the bandstand, it was this monumental moment. We’d knock ourselves out, but the people would go nuts. It’s like we’re coming with a big stick. We’re going to hit you over the head … in a nice way.”

Again, while each frequents the Vail Jazz Festival as a solo artist, it’s rare that this powerhouse trio comes together in Vail. Clayton, Vail Jazz’s Director of Education, has mentored 250 students in the famed Vail Jazz Workshop, but on these two special nights, he’ll be tapping into a unique talent portal with Alexander and Hamilton.

Don’t miss Monty Alexander, John Clayton and Jeff Hamilton celebrating 40 years in an intimate lounge performance on July 6 to kick off the 2016 Vail Jazz Club Series at its new location in Mountain Plaza Lounge. Doors open at 8 p.m. and music starts at 9 p.m. Tickets are $40. The trio then opens the Vail Jazz @ Vail Square season from 6 to 8  p.m. on July 7 at the all-weather jazz tent in Lionshead. Tickets are $20 for general admission or $40 for premium seating. For tickets or more information visit vailjazz.org or call 888-VAIL-JAM.