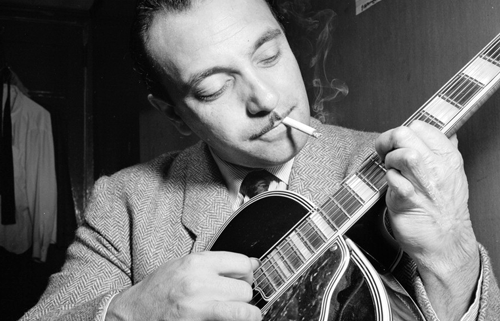 Our story begins in northern India more than 1,500 years ago when a small group of Hindi people began migrating from their homeland. Over centuries they made their way through the Balkans to Eastern Europe and ultimately throughout the world. They are the Roma or Romani people, known as Gypsies, a term many feel is used pejoratively against a people who have been persecuted wherever they have settled. Being predominately dark skinned, they have not been welcomed in their host countries and have continuously been on the move with a nomadic lifestyle. Originally thought to have come from Egypt, the term “Gypsy” was derived from the mistaken belief that this was their country of origin, but geneticists using the DNA of the Romani have conclusively traced their origins to the Punjab region of India.

The critically-acclaimed Django Festival All-Stars, who will play at Vail Jazz @ Vail Square on July 2

Blessed with a rich musical tradition, many earned their living by being nomadic entertainers and wherever they took refuge, they greatly influenced the music traditions of their hosts. This outsized impact can be heard in the flamenco music of Spain, derived directly from Romani music. Turkish, Russian and Eastern European music has been greatly influenced by Romani music (e.g., Liszt’s famous “Hungarian Rhapsodies”) and there is now a well-established technique of violin playing known as Gypsy Violin.

Jean Baptiste “Django” Reinhardt, the son of a traveling entertainer, was born in Belgium in 1910 but grew up in France in a Gypsy settlement outside of Paris. Django began to play music at an early age, but his left hand was severely burned in a campfire when he was 18. He overcame the disability by inventing a unique fingering technique on the guitar, and by the ’30s, he was touring internationally, becoming one of the most important jazz guitarists of all time. As a founding member of the Quintette du Hot Club de France, he invented a style of jazz known as “Gypsy Jazz” that has been played for more than 80 years throughout the world. Django could not read music, but that didn’t matter. By using a guitar as a rhythm instrument (the player strums it in a distinctive percussive manner), Django was able to dispense with the drums and was able to combine two guitars (one rhythm and one melody), a violin, an accordion and a bass to create the classic “hot club” sound. With the emphasis on the second and fourth beat of each measure, Gypsy Jazz has a “swinging” toe-tapping feel that never fails to entertain.

The vocal sensation Cyrille Aimée, who will play at Vail Jazz Club Series on July 15 and Vail Jazz @ Vail Square on July 16

Branding is everything today, and in the world of Gypsy Jazz, there is no shortage of “Hot Club” bands here in the U.S. — the Hot Club of Detroit, San Francisco, New York, Los Angeles and even Cowtown, to name a few. In addition, there are many Django festivals in cities throughout the U.S. and Europe, with some straying from the authentic into a more commercialized form of the music, which is sometimes jokingly referred to as “Gadjo Jazz” (Romani for “non-Romani jazz”).

Carrying on the true tradition of Django is the Festival de Jazz Django Reinhardt presented annually in Samois-sur-Seine, France (the town where Django lived at the end of his life — he died tragically of a brain hemorrhage at the age of 43). This lovely town is venerated by the Gypsy Jazz community as being the place where authentic Django music is presented each year. With devotees (listeners and performers alike) from throughout the world descending on this beautiful village not far from Fontainebleau, it becomes the center of Gypsy Jazz for one week each year in late June.

So now you know the part of the story of how a unique music made its way from India to France, but where does Vail fit into the story? This year, Vail Jazz is pleased to celebrate the music of Django in Vail during our 21st annual Vail Jazz Festival by presenting two of the most compelling internationally known interpreters of Gypsy Jazz: The Django Festival All-Stars (6 p.m. July 2 at Vail Jazz at Vail Square in Lionshead); and vocalist Cyrille Aimee (9 p.m. July 15 at Cucina at the Lodge at Vail and at 6 p.m. July 16 at Vail Jazz at Vail Square in Lionshead). The All-Stars are a quintet with classic instrumentation and a commitment to swing hard and faithfully play the music of Django. Aimee is a Vail Jazz Festival favorite who grew up in Samois-sur-Seine and fell in love with Gypsy Jazz as a young girl. She is now entertaining audiences with a wide range of vocal stylings, including Gypsy Jazz, that have propelled her to the top of the world of jazz.

Was Sinatra a jazz singer? Scroll to top