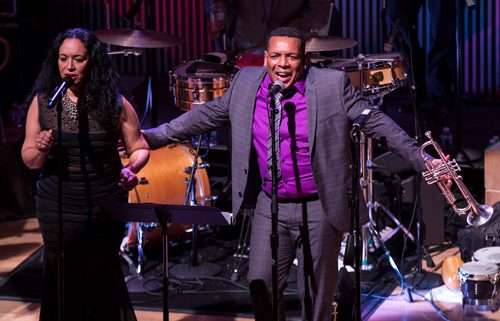 The famed, 14-piece Cuban ensemble performs in Vail this Thursday

Dr. Michael Davison has been to Cuba 40 times. Like Cubanismo frontman Jesús Alemañy, he is a mastermind on the trumpet and has played for decades. Professor of Music and Director of Jazz Ensemble at the University of Richmond, Davison can emulate just about any of history’s trumpet-playing heroes. But there’s something about Alemañy’s style that he simply can’t nail.

“I’ve got a doctorate in trumpet. I’ve been teaching Cuban music for 20, 30 years. It’s the same as if you really study a language. You know from whence something came. You know each rule and inflection. You can speak and understand proficiently. I can hear the Cuban in Jesús. And I can’t play some of that phrasing. If you’re a trumpeter, you just sit back and go, ‘wow,’” Davison says.

Alemañy is the leader of ¡Cubanismo!, a 14-piece Cuban jazz ensemble that has been producing and recording music since 1996, when its first album immediately landed in the top 10 of the worldwide Latin Billboard charts and the ensemble has since gone on to establish a global reputation as one of Cuba’s pre-eminent jazz groups of all time. Davison and members of ¡Cubanismo! will conduct an educational presentation on Cuban jazz during an already sold out Vail Jazz and Vail Symposium partnership workshop in Vail Wednesday evening and ¡Cubanismo! then takes the stage Thursday evening for a blow out Vail Jazz @ Vail Square performance.

Alemañy began playing the trumpet at the age of 11 and by the time he was 15, was performing in the popular carnival parades in his home city of Guanabacoa and then touring the world as a member of Sierra Maestra, another famous Cuban export exemplifying the nation’s notorious Son genre, fusing elements of African and Spanish rhythms.

“Son is the most important music to come out of this hemisphere,” Davison says. “It’s all Cuban. You can trace ragtime, jazz … all the indigenous American music genres to Cuban trade routes and slave rhythms. Cuban instruments are very diverse. The front line is the percussion – the congos, bongos and timbales. The language of jazz comes through the horn players,” Davison says, adding that ¡Cubanismo! is among his favorite bands of all-time and Alemañy perhaps his most beloved trumpeter.

Davison has been working much of his career to explain and convey the wonder that is Cuban jazz.

“The way we listen to music is not the way we should listen to Cuban music. You’ll be confused,” he says. “You won’t know where the beat is. You have a pianist that is a drummer. You have congos that are doing this, ‘duka, duka, duka’ sound. They all interlock. It’s like looking at an impressionist painting and not knowing what you’re looking at. You back up and it makes sense.”

When asked to explain what sets Cuban jazz apart from other forms of the genre, Alemañy says it is the quintessential fusion of numerous musical styles.

“It is knowing the harmonies and melodies of the beginning of Cuban music and being able to combine the freedom of jazz,” he says. “It takes the most important parts of the mambo, the cha cha cha – the solos, arrangements and melodies – and make it into Latin jazz. It becomes contagious.”

Alemañy equates his 44-year relationship with the trumpet to “a way of life.” Playing a few notes upon waking up every morning is as necessary to him as stretching or sipping coffee is to many of us.

“Emotionally, it is my own life,” he says. “Every day getting up and blowing a couple of notes. It is like breathing.”

The 14-piece wall of sound that is ¡Cubanismo! perfoms at 6 p.m. Aug. 10 at Vail Square. In addition to bandleader Jesús Alemañy on trumpet, the ensemble features three vocalists – Alina Vila, Evelio Galan and José Gil, guitarist Pablosky Rosalez and bassist Cristobal Verdecia. The percussion section includes Pacha Portuondo on timbales, Aris Montenegro on bongos and Papiosco on congas. The horn section is rounded out by Daniel Ortiz on trombone, Alexis Baro on trumpet, Osmany Collado on saxophone and Jorge Maza on sax and flute. General admission tickets are $25, preferred seats $40 and premium seats $50. Presented by The Jazz Cruise and Blue Note at Sea, Vail Jazz @ Vail Square takes place every Thursday evening through Aug. 24 in the all-weather Jazz Tent in The Arrabelle courtyard in Lionshead. Drinks are available for purchase.

For tickets or more information click here or call 888-VAIL-JAM.

Chief of the Congueros

Not the Girl from Ipanema Scroll to top