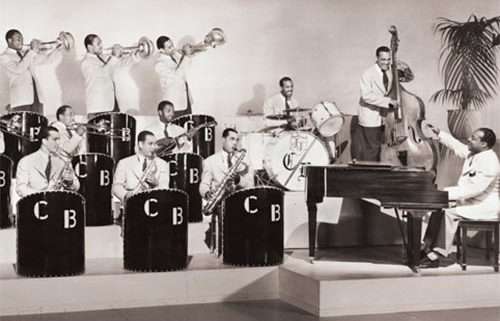 There’s no jazz pioneer like the incredible William James “Count” Basie who graced the jazz scene in the 1930’s with his memorable and exhilarating performances and compositions. This summer the H2 Big Band will pay tribute to the monumental music of this jazz big band leader in an uplifting, and inspirational performance.

Back for a second year in a row, the H2 big band will perform with an outstanding 17 piece band led by trumpeter Al Hood and pianist Dave Hanson. They will tackle the greatest hits of Count Basie that the whole family can hum and dance along to! After all, there’s no big band sound like Count Basie’s arrangements. With Count Basie’s distinctive sounds and melodies, it’s hard not to fall in love with this sophisticated yet playful music.

Count Basie was indeed a founding father of the big band musical era, thriving through the decades of vaudeville, the swing era, the bebop era and the Soul/Blues era. In an era when African-Americans did not lead bands, Count Basie took the initiative to start his own orchestra, including the hottest jazz musicians of the day. With his remarkable leadership and jazz composition skills, it was no surprise his songs would instantly become household hits.

Over the span of his career, earning nine Grammy awards and a spot in the Grammy Hall of Fame, some of Basie’s most loved songs would include “One O’clock Jump”, “April in Paris”, “Alright, Okay You Win”, and “Everyday I Have the Blues”. Collaborating with different instrumentalists and notable jazz singers including Tony Bennett, Ella Fitzgerald, and Frank Sinatra, Count Basie performed for fans all over the world, and recorded over 480 albums.

Count Basie not only made an impact in jazz music, but also served as a humanitarian and philanthropist and received a Kennedy Center Honor. 2015 marked over 80 years of Count Basie’s music, and thanks to tribute bands such as the H2 Big Band, Basie’s music is still swinging today! While it is truly hard to replicate the exact sound of Basie’s music, the H2 Big Band creates an engaging and authentic representation that makes you feel like Basie is musically present.

Join us at the Vail Jazz Festival on August 25th at 6pm in Vail Jazz Square for an exciting evening with the H2 Big Band playing the music of Count Basie. Tickets range from $20-$40 and are available at https://www.vailjazz.org/events/h2-big-band-tribute-count-basie/

Check out this video of Count Basie’s “One O’clock Jump ” to get you in the mood, and we’ll see you at the show!