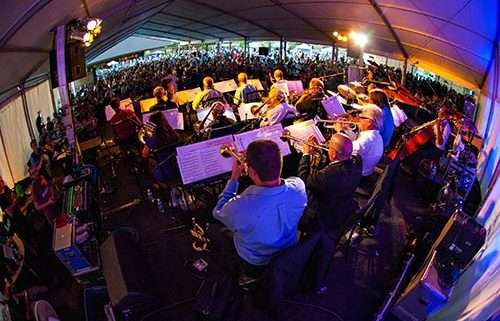 From tapping your foot to bobbing your head to launching yourself into an all-out Lindy Hop, swing music simply makes you want to move. When it involves 17 musicians and originates with Count Basie, the dance formula is pretty much guaranteed.

“One thing is that there is a heavy swing feel that only the Basie band was able to create. All jazz players agree that the Basie band swung more than any big band ever. The thrill of the big band sound is unlike any other musical experience,” says Dave Hanson, pianist, composer and co-founder of H2 Big Band. “As a composer, I get a rush to hear what each musician offers. Nothing is more fun than playing the Basie arrangements.”

Hailing from Denver, H2 Big Band’s two albums have reached top 15 status on Jazz Week’s national play list and the band’s original target was set on the studio. Then they realized how exhilarating it was to perform, which they will do in Vail on Aug. 25, paying tribute to Count Basie. In addition to Hanson and co-leader/trumpet player Al Hood, the band features a rotating line-up of 15 acclaimed artists, including a massive brass section, which it turns out is pivotal to the Basie sound.

The explosive performance will cover Count Basie tunes from the 1940s through the 1970s as well as a handful of H2’s original compositions.

“The H2 Big Band is extremely well versed in the Basie tradition, particularly our well-oiled rhythm section of Dave on piano, playing the Count himself, Todd Reid on drums and Ken Walker gliding the band via streamlined swing on the bass,” Hood says. “The icing, of course, will be the Freddie Green stylings of rhythm guitarist Mike Abbott.”

Without seeing the Count in the flesh, die hard Basie fans with their eyes closed will be hard-pressed to distinguish H2 Big Band from the swing king’s original band, the sound is that authentic … not to mention infectious.

“The legacy of the Basie band, in my opinion, is steeped in feel good swing, uncompromising time feel, ‘in the pocket’ groove and exuberant solo episodes,” Hood says. “This is certainly the essence that we will bring to that night of tremendous music. Swing will most assuredly be king.”

Each member of the big band is faced with a complex task of timing, harmony and connecting with the audience, but for Hanson, who plays the role of Basie, nailing the formula is especially involved.

“As the piano chair, you have to know the very unique style of Count Basie,” he says. “If there were one word to describe the playing of Count Basie it is sparse. He would only play the notes that were necessary. He would only play if the wind instruments weren’t playing. The Basie ending is a piano fill – a ‘plink-plink-plink’ – on most of his charts. It’s so identified as his that any piano playing the ‘plink-plink-plink’ is acknowledging Count Basie. We think of him as playing simply because he played very few notes, but he could be a great stride pianist. He could go into amazing stride piano solos, based on ballroom stride piano players from the ‘20s.”

The broad gamut of Basie’s sound including many of the Count’s classic arrangers will be summoned by H2 big band during the Vail performance. Even for audiences not familiar with Basie’s legacy, the urge to dance will be undeniable. Hanson says that every live H2 Big Band performance is characterized by one fixed reality above all others and that’s to expect the unexpected … especially when Count Basie is the theme.

“It’s a chance for the band to really show off the musicians in a great way. Hearing us all firing up together is a great thrill,” Hanson says. “There’s an element of chance involved. Every concert is different. Every acoustic is different. There’s a chance for something to happen that’s never happened before.”

Catch the H2 Big Band Tribute to Count Basie at Vail Jazz @ Vail Square from 6 to 8 p.m. Aug. 25 inside the all-weather jazz tent in Lionshead. General admission tickets are $20 in advance and premium seating is $40 in advance. For tickets or more information, visit vailjazz.org or call 888-VAIL-JAM.

The Judge of Time Scroll to top