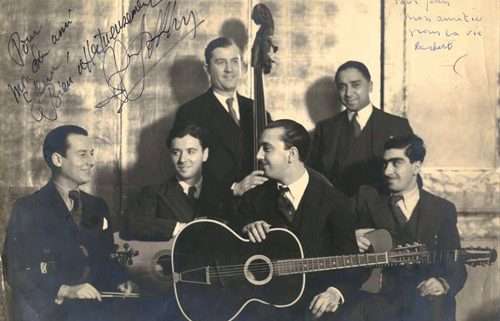 We all know the famous proverb: necessity is the mother of invention. This is the story of how true that maxim is. We begin in Belgium in 1910 when Jean “Django” Reinhardt was born into a family of itinerant Romani (Gypsy) musicians that lived in poverty, moving their caravans back and forth between Belgium and France. Gypsies (a pejorative term that was based upon the false notion that the Romani people came from Egypt) have been viewed as outsiders in Western Europe for centuries and Django and his family were clearly outcasts.  His father and seven uncles were all musicians who eked out a living playing music. Django (“I awake” in Romani) was taught to play the violin by his father when he was 7. At 12 he was given a banjo-guitar – a banjo with six strings like a guitar, instead of four strings like a banjo. He quickly taught himself how to play it and he and his brother became buskers working the streets of Paris.  Django appeared to be a savant, capable of learning music just by hearing it once, and it was clear that he was a virtuoso on his instrument. He began to play with adults who were often intimated by the child prodigy’s musical prowess. As a teen he was exposed to jazz and began to incorporate it into his music. At 15, he switched from street musician to earning a living by playing music in the dance halls of Paris, where he performed a style of music known as musette, a combination of French folk music, polka, waltz and jazz. Hearing a recording by Louis Armstrong during this period, it had a transformative influence on him and he began to focus on playing jazz.

Married (common law) at 17, he never received a formal education. It is doubtful that he ever learned to read, books or music, although in his late 1920s he did learn to write. He played with many dance bands until he was 18, moving from band to band, while making several recordings as a member of various groups. His reputation began to grow among the musicians he played with and then beyond, and on a fateful night in late October 1928 Englishman Jack Hylton, the leader of Europe’s most well-known jazz band, traveled to France to hear Django play and offered him a job.

Django accepted the offer but within days tragedy struck when he was severely burned by a fire in his caravan. His injuries were extensive, over half of his body (the right side of his body and left hand) sustained first and second degrees burns. The doctors discussed amputating his right leg as it was paralyzed and advised him that he would never play again because his left hand was burned beyond repair. He refused to accept their prognosis, left the hospital and took up residence in a nursing home, beginning an 18-month long rehab. He ultimately regained his full mobility, 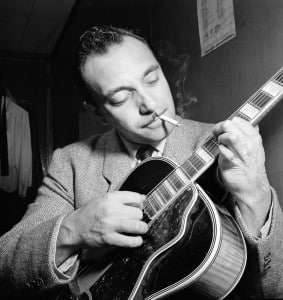 but was scarred for life. Unfortunately, the two small fingers on his left hand were paralyzed and he never recovered the full use of them.

At the start of his convalescence his brother brought him a guitar and encouraged him to learn to play it. The neck of the guitar was bigger than on his banjo-guitar and with the limited use of his left hand he was not able to hold the neck of the guitar and press the strings down on the fretboard. He practiced relentlessly and in the process developed a unique way of fingering the fretboard. Not able to use all the fingers on his left to play chords in a horizontal manner, he fashioned new chords using his contorted figures where possible, while rapidly moving his two good fingers up and down the neck of the guitar forming chords in more of a vertical way, inventing a truly unique technique. A less talented musician would have given up but Django was determined to overcome his handicap and he began to play professionally again. If he had stopped there, this would be a wonderful story of inventiveness and perseverance in the face of adversity, but Django didn’t stop there.

Fortuitously, he played in an impromptu jam session with Stéphane Grappelli, a French-Italian violinist, and that encounter led him to synthesize the music of his Gypsy heritage with jazz to create a ground breaking sound that would have world-wide impact, making him the most important European jazz musician ever and a guitarist who would influence successive generations of guitar greats. By combining three guitars with a violin and bass, at a time when American jazz was dominated by the sounds of piano, drums and horns, he created what became known as Gypsy Jazz (Jazz Marouche). He and Grappelli formed a band, “Quintette du Hot Club de France,” and they both became internationally famous musicians.

Tragically, Django died of a brain hemorrhage at 43 in 1953, but his legacy lives on as Gypsy Jazz is played throughout the world with jazz festivals dedicated to Django and his music held annually in Australia, Brazil, Canada, Ireland, Scandinavia, South Africa, the UK, the U.S. and of course, Belgium and France.

Vail Jazz celebrates the musical legacy of Django on July 19 at 6:30 p.m. and 9 p.m. at the Sonnenalp Hotel and on July 20 at 6 p.m. in the Jazz Tent at Vail Square in Lionshead when it presents the Hot Club of France Tribute Band lead by French virtuoso accordionist Julien Labro. The music will be exuberant and played in a flamboyant manner, sizzling, infectious, and swinging, just as Django performed it 80 years ago.