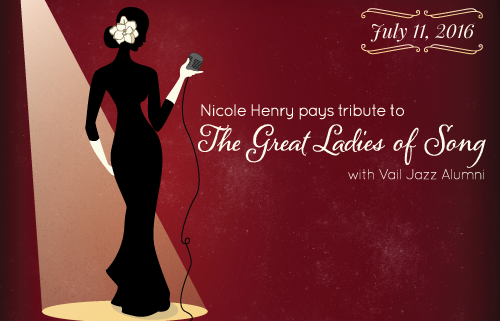 This Monday (July 11), Vail Jazz will present the splendid vocalist Nicole Henry in her tribute to the “Great Ladies of Song.” On stage Nicole has a mesmerizing presence and is blessed with a unique gift as a performer that allows her to connect with her audience in a powerful way. When covering a classic tune, Nicole captures the essence of her predecessor’s brilliant treatment of the work, while telling the story in her own style.

At last year’s Vail Jazz Festival, she lit it up over two nights delivering tender ballads, up-tempo jazz standards, cabaret torch songs, down and dirty blues, soul stirring hits, awe inspiring gospel tunes and booty shaking R & B anthems. The audience was so taken by her extraordinary talent that we immediately made plans for her to return to Vail and it was agreed that she would pay homage to some of the great female vocalists who have shaped the music of today and whose collective body of work has entered all of our consciousness.

Before we explore the iconic singers Nicole will pay tribute to and why, it should be understood that Nicole’s goal wasn’t to create a “Top 10 List” of female vocalists. You can go to Google for that type of thing, but it is a foolish endeavor to compare singing voices, so that you can declare winners and losers in a popularity contest.

With that caveat in mind, Nicole has selected these Great Ladies of Song: Ella Fitzgerald, Aretha Franklin, Billie Holiday (Eleanora Fagan), Whitney Houston, Etta James (Jamesetta Hawkins), Nina Simone (Eunice Kathleen Waymon), Sarah Vaughan, Dinah Washington (Ruth Lee Jones) and Nancy Wilson. They were born between 1915 (Ella) and 1963 (Whitney), a period of time saw a great deal of change in American society, but nothing like the change that took place in the next 50 years. Unfortunately, many of them did not live to see the most recent changes in our culture, as only Aretha and Nancy are still with us.

Yes, they won Grammys and numerous awards, sold a lot of records, became world famous and performed for royalty and throughout the world. Some easily fit into categories such as jazz, R & B, soul, gospel and pop, but others defy classification as they effortlessly moved between different styles of music. Some amassed large fortunes, and in many cases lost those fortunes.

Unfortunately, drugs and alcohol shaped many of their lives and careers (Billie, Dinah, Etta, Whitney and Aretha) and in some cases, ultimately caused their demise at an early age (Billie, Dinah and Whitney). Mental illness was a constant companion for Nina for a significant number of her years. Many of them had failed marriages with Dinah holding the unenviable record of seven times to the altar. They had an array of voices – some limited in range (Billie, not much more than an octave) and in other cases quite expansive with an unbelievable range (Sarah: three octaves). Some had perfect pitch and technique comparable to instrumentalists (Ella). Some were virtuosic while others were limited in that category, but made up for it with expression and passion (Billie). Several got their start by winning talent contests (Ella, Sarah and Dinah).

However you try to make comparisons, though, what you discover is the one constant … that each was an ORIGINAL and brought to her performances real emotion and authenticity that allowed her to connect with the audience. It’s the kind of emotion that isn’t practiced, but comes from within, when the lyrics of a song touch your soul. And speaking of soul, one unifying factor for all of these women (with the exception of Ella) was that they started singing as youngster in their churches and gospel music was their first step into the vocal world. All of them had a strong connection to the blues and all were Black. Think of it – American Black women singers, singing gospel and/or the blues, during a time period (all started singing professionally between the1930s and 1960s, except for Whitney who start focusing on singing in the early 80s), when men dominated the music business and blacks and women were struggling to assert themselves in a prejudiced and unjust society.

Now we think of concert halls as the venues where great singers work, but for many of them, they started out in smoked-filled nightclubs and saloons where working conditions for a woman were challenging to say the least. It was a time when the plight of blacks and women had yet to take center stage in our political discourse and cultural values were ever so slowly changing. Ultimately these women were not only great singers but trailblazers who fought for their place in the spotlight and went on to inspire future generations of singers. Their gift was not just to sing a song, but to reach within themselves to craft their own style and tell a story in a convincing way. The pain that each of them endured had to be balanced with something, and for these Great Ladies of Song, it was by the joy of their music making. These women endured and we are the beneficiaries of their musical legacies.

Nicole Henry Pays Tribute to the Great Ladies of Song

Jazzing up the pop and rock Scroll to top