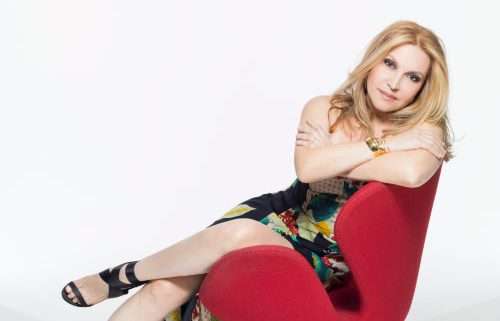 Eliane Elias has been living out of a suitcase for nearly 40 years. Starting her career as a teenager in her native São Paulo, the Brazilian singer/pianist has been on a trajectory that’s ranged from steadily to steeply upward.

“I work very hard at what I do and I feel blessed when I feel things don’t stay in the same place. They keep getting better,” she says.

With 35 albums under her belt, seven Grammy nominations – including a win in 2015 –and nearly constant Billboard chart-topping status (2017’s “Dance of Time” landed at Billboard No. 1 in not one but two categories – Traditional Jazz and World Music), the world tours have basically been nonstop for Elias since she can remember.

“I was raised in a home where I heard jazz as much as I heard Brazilian,” she says. “The Brazilian music was always all around me – great and eclectic. I was very lucky. My mother loved music so much and was always hip and always informed. I was accepted into music school at age 13. I haven’t stopped since age 17. I don’t know a life without a suitcase.”

Luckily, Elias loves her life with a suitcase … at least the performance part of it.

Every time she’s on stage, her hands are working in a mile-a-minute blur on the piano, yet the rest of her is always dancing. As her twinkling eyes scan the audience, her expression moves from brow-raised passion during the delivery of an emotional line (sometimes in English, sometimes Portuguese) to an enormous smile.

“The performance is the fun part,” she says. “What’s hard is the traveling.”

The Brazilian always makes time to chat with audience members when on tour. Upon  being asked to share some of the most memorable feedback she’s received, she says she’s been blown away by the tales of joy and romance. She’s heard from fans that have named their babies Eliane. Couples have told her about how her music led them to fall in love, get married, conceive children and patch up struggling relationships. She’s had women tell her she’s been with them for decades, accompanying them like a best friend on every long drive. She’s heard from numerous fans about how her songs speak to them directly. But that’s just the beginning.

“About three months ago, I met this man who said he’d had a stroke. He’s in his early 50s – not old – and he was in a coma. He told me his wife was dead and they had teenagers. There was nothing medically that anyone could do. There was a doctor that loved my music and started playing my music for him. Somehow he came back. He was looking at me like I was performing a miracle. He was crying telling me this. Then I ended up crying,” Elias recalls.

The Brazilian shares another recent story she heard from a couple who attended a New York City performance at Birdland Jazz Club. Their son had terminal brain cancer and in spite of all medical likelihood, continues to survive. They told Elias, “what’s keeping my son alive is your music.”

Another fan opened up to the artist about his chronic depression, for which he’d received all kinds of intensive treatment over many years. He told her he eventually found himself  in a state in which it was impossible to feed himself or even to leave his bedroom. Then he began listening to her song, “An Up Dawn.” He took a shower. He went outside. He listened to the song over and over. It literally lifted him out of bed and back into life.

“People feel the music in different ways,” Elias says. “When I heard those testimonies, I took it very seriously. The reaction every time I play for people makes me feel it’s a fantastic mission. I love what I do. It’s for them. It’s for everybody. I’d travel every day of my life for it.”

Not the Girl from Ipanema

Jimmy and the Beast Scroll to top