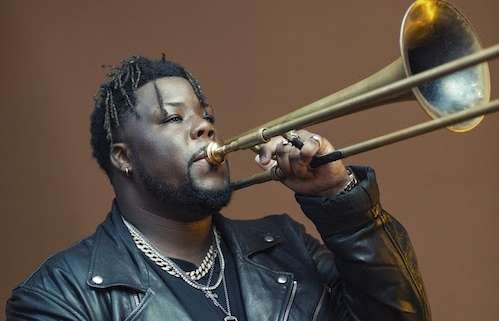 Raised by his grandmother in New Orleans, taking up the trombone as a child and performing at Carnegie Hall by the time he was 15, Jeffery Miller didn’t realize how much music meant to him until he came to Vail in 2013 and was brought to tears.

That was back in 2013, when Miller was 17 years old and attending the Vail Jazz Workshop, which hosts 12 of the nation’s top teenage musicians for a week of intensive play-by-ear training with instructors from the Vail Jazz Party House Band and culminates with performances in the Vail Jazz Party over Labor Day weekend.

“I remember the moment like it was yesterday,” Miller says. “It was at the Vail Jazz Party and the faculty was playing an original – it was so beautiful and powerful. I had to go the bathroom to wipe my eyes. It was amazing music. It made me realize how amazing music can be. That’s why Vail Jazz will always have a place in my heart. That was one of my biggest moments.” 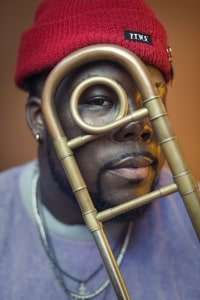 Now 23 years old, living in New York City and in the final semester of his Masters of Arts degree at Juilliard, Miller took that big moment and carried it skyward.

Not long after his mind-blowing week in Vail, Miller landed a full scholarship to pursue his Bachelor’s degree at Juilliard and then performed at the Apollo Theatre. He’s returned to his hometown many times in a blaze of glory, playing big stages at the New Orleans Jazz and Heritage Festival and the VooDoo Fest. He’s performed and recorded with some of the biggest names in jazz – The Count Basie Orchestra, Wynton Marsalis and younger brother Delfeayo Marsalis as well as Vail Jazz Party mentor Wycliffe Gordon.

“For me, it’s hard to pinpoint a most rewarding accomplishment, but developing relationships with so many people I respect and looked up to like Wycliffe and Wynton, that’s been a beautiful thing,” Miller says. “The experiences I’ve had performing that re-instill the passion of being a musician … I wouldn’t trade those for anything.”

While also difficult to pinpoint a single performance that’s served as an ultimate standout, Miller says the thrill that came with playing a sold out crowd at Madison Square Garden with the Preservation Hall Jazz Band supporting rock icon Arcade Fire ranks – so far – as the major highlight.

“We shut the show down. The energy and the sold out crowd was incredible. It was like a dream,” he says.

Branching beyond the jazz genre has also given Miller a great deal of satisfaction. He has been nominated for three Grammy Awards for his work with Jon Batiste and John Legend, recently recording a Christmas album with the latter.

“I want to make music that is not just jazz music,” he says. “I’m working on a lot of different projects – some pop stuff, some R&B stuff – I’m sitting on a live jazz album that I might put out soon.”

In the immediate future, however, Miller’s key focus is to earn his advanced degree. This should happen before he knows it, given the whirlwind that is his daily routine in the Big Apple.

“The day might start out with me barely waking up from the night before after having a gig until 3 a.m. I’ll wake up super early to go teach kids about jazz at a middle school in Queens or Brooklyn. Then I’ll have to rush off to class in an expensive Uber. Then I usually have a break and big band rehearsal from 3 to 6 p.m. Then I’d probably have another gig that night from 7:30 to 11 p.m. and if I’m pushing it, I might schedule myself for another gig from 11:30 into the late night …”

In spite of the early mornings, Miller has found teaching the middle school kids incredibly rewarding, imparting some of the tips and tricks he learned in Vail.

“Most of the time it’s kids who haven’t had any music training,” he says. “I like showing them the funny sounds a trombone can make, how loud it can play and how you can speak through the instrument. … that’s what gets you interested. It’s about educating their ear and challenging their ear musically. That’s how I came up in New Orleans and what I found in the Vail Jazz Workshop. It’s a very powerful tool.”

After he finishes his degree, Miller’s goal is to sign a record deal and start traveling the world again. He’d love to make enough money to help his grandmother – who raised he and his twin sister after their mother died when they were infants – re-open a women’s shelter back in New Orleans. He’s returned to Vail a few times since his Workshop days to perform at the Vail Jazz Party as well as at the Vail Dance Festival and he hopes to be back again soon.

He explains his overarching career plan rather simply:

“I hope to find myself in some kind of situation that garners respect and makes the people who care about me proud.”

Alumni Series: An Instrument for Life