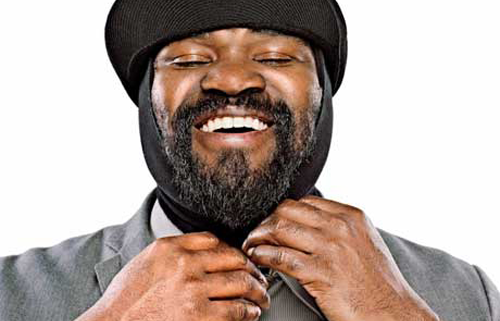 Gregory Porter was barely in kindergarten when he wrote his first song.

Sounds pretty sophisticated for a five-year-old, right? Clearly, the Brooklyn based, California-born singer was onto something big.

“I knew nothing about love. Or dream boats. I had never been on a boat, never been in love. What am I talking about?” Porter wondered aloud in a Soul Talkinterview in London last year.

As a child, the 43-year-old never would have guessed he’d make a career out of his singing and songwriting, or go on to win a Grammy Award (Best Jazz Vocal Album in 2014 for Liquid Spirit).

Raised in southern California by his mother with his father mostly absent from his life, Porter’s mother likened her young son’s sound to Nat King Cole’s. Sneaking into his mother’s record collection, Porter would listen to Cole and imagine the iconic singer was his father. It was at that young age that Porter realized the power of music.

“Yes it’s entertainment, but it’s a deeper thing. The ability of music to heal, do other things, was clear. [Nat King Cole] wrote those songs not for a 5-year-old boy listening on a console stereo. He wrote it to make music, for his career. But I was thinking, ‘this is my daddy.’ And unbeknownst to me, I was cultivating a whole thing – ear training … all of it,” he said on Soul Talk.

It wasn’t long before Porter’s mother, a storefront minister, enlisted her son to sing gospel in her church. Though a burgeoning athletic career that led to a full ride football scholarship to San Diego State University was curtailed by a shoulder injury, Porter always found an emotional outlet in his music.

As Porter’s sound developed, it was influenced by “everything on the radio.” Michael Jackson, Marvin Gaye and Stevie Wonder are names that fall under his style umbrella. Led by his all-encompassing baritone, Porter’s own sound, he says, encompasses “the full musical experience.”

Stevie Wonder is just one of the big names with whom Porter has shared the stage in the last few years. He has also performed alongside Elton John and Quincy Jones.

“When I heard that Elton john was a fan I was like, ‘you a liar and a half,’ Porter said. “I’m still blown away by those names.”

Porter had moved to Brooklyn and began performing at small neighborhood venues in 2004. He took up a residency at St. Nick’s Club in Harlem and found his touring band. His first two albums, “Water” in 2010 and “Be Good” in 2012 were nominated for Grammy Awards and 2013’s “Liquid Spirit” won for Best Jazz Vocal Album. As for his emotional kinship to Cole, a major part of Porter’s theater career (which also included his role in the original cast of Broadway’s “It Ain’t Nothin’ But The Blues”) was the musical he co-wrote and co-founded, “Nat King Cole & Me.”

Always appearing in his trademark fuzzy Kangol hat and told more than once by his band mates to “not sing so hard,” Porter doesn’t shy away from writing songs about tough situations and real-life experiences, painful as they may be.

“I want to speak to the human heart,” he says.

Many of Porter’s songs pay tribute or were somehow inspired by his mother, who always believed in him and foresaw his successful future from the moment she laid ears on that first song.

“She used to say, ‘your gift will give you space at a table with kings.’ That’s happening for me,” Porter says.

Don’t miss Grammy winner Gregory Porter with quartet – Chip Crawford on piano, Aaron James on bass, Emanuel Harrold on drums and Yosuke Sato on saxophone – at 6 p.m. Thursday, Aug. 27 for Vail Jazz @ Vail Square in the all-weather jazz tent in Lionshead. Jazz Tent tickets are $15 or $30 for VIP seats (including front of the tent seating and a drink ticket). Ticket prices go up an hour before showtime.