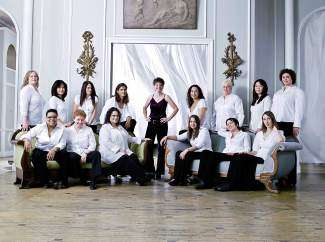 VAIL — When it comes to talent, gender has nothing to do with it. DIVA, the 15-piece all-female jazz orchestra from New York, delivers a jaw-dropping wall of sound that puts many all-male acts to shame. That each ironclad musician looks like she’s having the time of her life at every performance makes for incomparable, swinging and gripping entertainment.

DIVA drummer Sherrie Maricle became the first member of DIVA when the band was formed more than 23 years ago by fellow drummer and artist manager Stanley Kay. As Maricle tells it, she was performing in the pick-up orchestra at a Maurice Hines concert that Kay was conducting for the Shubert Theater’s 75th anniversary. After the show, Kay approached Maricle and “asked if I knew other women who played as well as I did.”

Of course, she knew plenty. After an audition bringing in 40 top musicians from all over the world, the group was whittled down to 15 and DIVA was born.

“Over the last 23-plus years of leading the band and playing with dozens of others, I can tell you with 100-percent certainty that there is absolutely NO difference in talent, skill, passion or creativity between DIVA and any other world-class concert jazz orchestra,” Maricle said, naming Jazz at Lincoln Center, Maria Schneider, Clayton-Hamilton, Count Basie, Vanguard and Gordon Goodwin as examples. “The only thing I have noticed is that the DIVA performance dynamic – collectively and individually – is one that is fully engaged, aware, supportive and wildly enthusiastic regarding the music, each other and the audience. I don’t always experience that with other groups.”

“The most fun for me is being in the center of the band — literally and metaphorically — and leading from the inside, creating a pulse like a heart beat. Drummers naturally have a lot of control, leader or not, over the band dynamics, energy and phrasing … so that’s exciting. I also aspire to always inspire, highlight and support my bandmates.”Sherrie MaricleDrummer, DIVA

When asked to name highlights in DIVA’s decorated career, Maricle says “Oh My Gosh…there have been soooo many!”

Among them, the first of DIVA’s many featured performances with The New York Pops at Carnegie Hall, the 25th Anniversary of the Kennedy Center’s TV Special and the band’s first tours of Finland, Japan and Vietnam. Then there was the feature on NPR’s “Piano Jazz,” and creating the soundtrack for New York City’s (NBC and Macy’s) enormous fireworks display. Oh yes, there was also that pivotal appearance in the award-winning documentary “The Girls in the Band” (which will be presented at this Labor Day Weekend’s Vail Jazz Party). Maricle says that her band’s (DIVA and also the jazz quintet Five Play, each of which produces and performs all original compositions and arrangements) 13 albums, including a couple of new additions coming soon, “are like my children.”

Since attending parades as a small child and singling out the drummers as the coolest members of the band because they never stopped playing, Maricle has been drawn to the drums. But “the true enlightenment moment” came when she was 11 and saw Buddy Rich perform with His Killer Force Orchestra.

“When the band played their first note, I got goose bumps and was riveted the entire night,” she recalled. “I had never heard or seen anything like that before – the intense power, force, energy, swing and sophistication of a big band … music played with such fire and passion. I ran home and told my mother I was going to be professional drummer. Since that night I never wanted to do anything else with my life.”

As a bandleader, Maricle has aimed to follow in Rich’s footsteps, as well as those of Mel Lewis, Louis Bellson, Jeff Hamilton, Gene Krupa and Chick Webb.

“The most fun for me is being in the center of the band — literally and metaphorically — and leading from the inside, creating a pulse like a heart beat. Drummers naturally have a lot of control, leader or not, over the band dynamics, energy and phrasing … so that’s exciting. I also aspire to always inspire, highlight and support my bandmates, as well as listen to their musical opinions. Each and every one of them is a stellar musician and creative artist,” she said. “I’m very honored to share the stage with them.”

The inspiration goes well beyond the stage. Over the last two decades, Maricle and DIVA artists have provided “life-changing” instruction for dozens of young and up-and-coming musicians, and several audience members have experienced such sheer awe at performances that they’ve been brought to tears.

“I remember an older woman coming up to us sobbing with joy, saying she always wanted to be a musician, but wasn’t allowed. She just couldn’t believe how great we played. It made me cry, too,” Maricle said.

The 15-piece, all-female powerhouse DIVA jazz orchestra performs for Vail Jazz @ Vail Square from 6 to 8 p.m. on Thursday in the Vail Jazz Tent in Lionshead. General admission tickets are $15 and VIP tickets are $30. Ticket prices increase an hour before showtime. For tickets or more information, visit www.vailjazz.org or call 888-VAIL-JAM.

Shauna Farnell is a freelance writer contracted by the Vail Jazz Foundation. Email comments about this story to mwong@vaildaily.com.

Jazz as a religious experience