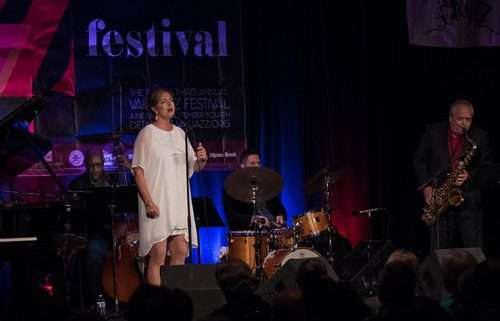 A review of Friday’s performances by Shauna Farnell

The 23rd Annual Vail Jazz Party is off and running, the first two nights of performances thundering forth one barrage of talent and energy after another.

The highlights thus far have twinkled in a blinding array of sparkles too numerous to name.

Among them though, the unblinking, rapt attention of the 12 teenage musical prodigies while watching their mentors – the Vail Jazz Party House Band – perform for the first time, was a spectacle to behold. The teens are mainstays among the packed audiences at the evening and late night Vail Marriott sessions along with majority of nationally acclaimed professional musicians – more than 70 performing throughout the weekend. Many of the artists have been friends for decades and the Vail Jazz Party presents a happy reunion and rare opportunity for musicians to soak up one another’s power when not on stage.

The glow sticks handed out at Adrian Cunningham’s CD Release Party Friday night were a fun touch, as the Australian called upon the audience for a mass color wave at the end of his set, following an amusing lesson in “speaking Australian.” Cunningham’s set featured a lively demonstration of “bluegrass clarinet” in his original tune, “Appalachia,” which was accompanied by some impressive walking bass from the imitable John Clayton as Bill Cunliffe added light flourishes on the piano and Jeff Hamilton kept a steady, lightning fast beat.

Vail Jazz founder Howard Stone brought out a birthday cake for Danish vocalist Sinne Eeg, whose set hypnotized the full crowd with some cleverly shifted lyrics on Cole Porter’s “Anything Goes” and a powerful rendition of Rodgers and Hammerstein’s “It Might as Well Be Spring.” She elicited a round of affirmative (and ironic) laughter from the audience in pointing out that “heartache is a gift for a musician.” Indeed.

The fusion of forces was show-stopping as Akiko Tsuruga, Jeff Hamilton, Graham Dechter and Terell Stafford took the stage, each rolling their combined magic into perfectly timed halts to let one another carry the light via solos.

Friday’s evening session, with set after set of powerhouse artists and world-class musicianship,  is just the beginning of a jam-packed weekend. If you haven’t checked it out yet, get to the Jazz Tent at Vail Square for an afternoon session or to the Vail Marriott . The Party goes all weekend.

To purchase tickets to the Vail Jazz Party click here, call 888.VAIL.JAM, or find us on-site at Vail Square in the afternoons and the Vail Marriott in the evenings.

The Singing and Guitar Playing Miracle