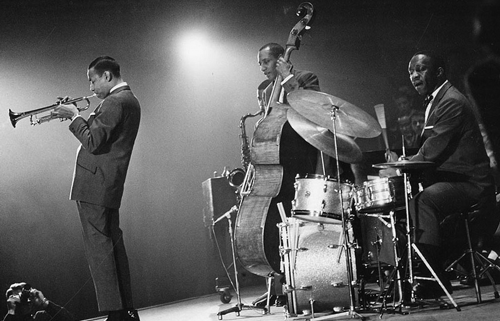 Lowering your cost per unit of output is the goal of the savvy businessman. Why pay four people to do a job when with some equipment, one can do all the work? So this is the story of how one musician ended up doing the work of four and changed jazz forever.

After the Civil War, freed slaves in New Orleans organized marching bands to play at funerals and other events. Inspired by the marching bands of the Civil War era, they used brass instruments, a bass drum, often with a cymbal attached, and a snare drum. By the early 20th century, the bands had moved indoors and were playing for parties and dances and so-called “Dixieland” jazz was in its infancy. No longer marching, band members were seated and because of indoor space constraints, bands had fewer musicians. It is unknown whether someone had the “eureka” moment and said, “since our drummer is seated, let’s cut our payroll and have him play two drums at once,” but that’s what happened. The snare drum was placed on a chair or stand and the bass drum put on the floor with a cymbal attached, allowing one musician to play all of them.

Drumming techniques had to change because striking a bass drum is nothing like playing a roll on a snare drum and these new techniques began to influence the way the band played. It wasn’t too long until drummers were trying to figure out how to use one of their feet to play the bass drum and ultimately the bass drum pedal was perfected. Next came the “snowshoe cymbal beater” – two small cymbals each attached to a board and hinged together so that they could be compressed (clashed) by a downward foot motion to make the desired sound. Ultimately, the “beater” was enhanced by adding a pedal device to work the cymbals (the “low-boy”). By the 1920s, drummers were searching for new ways to express themselves and the modern “hi-hat” became (and has remained) one of the staples of a drum kit.  By raising the level of the cymbals on the low-boy, the drummer could strike the cymbals of a hi-hat with his sticks, while his foot caused the cymbals to clash or held the cymbals together or apart, thereby creating a whole new series of sounds that pushed jazz forward.

The result of all these innovations was the simple fact that the drummer was now capable of simultaneously using both of his feet and hands to play the kit.  Bingo – one musician instead of four! As drummers were gaining the ability to in essence, play four instruments at once, they began switching from being a simple time-keeper for the band to a more integral part of the music making. The musical possibilities were greatly expanded by adding to their drum sets other drums, notably various sized tom-toms (round drums without snares) and percussion instruments, including multiple cymbals (see below), as well as woodblocks, tambourines, slapsticks, cow bells and other “contraptions” (as these sound-effect instruments were known) and in fact, the word “contraptions” ultimately morphed into “traps” and today many people refer to a drum set as a “trap set.”

Along with the hi-hat, drummers added combinations of cymbals – crash, ride, splash, swish, sizzle, Spanish and Chinese – to create their own sound. Each cymbal had a distinctive sound and by varying its size (diameter), thickness, alloys used, appendages attached and where it was struck, a drummer could create a signature sound.

As jazz has evolved, drummers have been ready. With additional drums arrayed before the seated drummer (it is interesting to note that the drummer sits on a “throne,” which may be an insight into the personalities of many drummers) and many contraptions in the drummers arsenal within easy reach, the drummer has become a central interactive part of a small jazz ensemble, supporting the improvising soloist and in turn soloing and improvising.

But it isn’t the equipment that makes the music, it is the drummer of course and many drummers, including “Baby” Dodds, “Papa Jo” Jones, Max Roach, Art Blakey, “Philly Joe” Jones, Roy Haynes and Elvin Jones, to name a few, have made important contributions along the way as jazz moved forward through the 20th Century and the new millennium has seen a new generation of drummers advancing the music with new and exciting sounds and rhythms.

On the evening of Sept. 5 at the Marriott Hotel, as part of the 21st Annual Vail Jazz Festival, the incomparable drummer Lewis Nash will present his Multi-Media Tribute to His Drum Influences, exploring the contributions that some of the greatest drummers have made to jazz. To read more about this performance, view pg. 63 of the Vail Jazz Festival Program online. Tickets are $75, to buy click here.