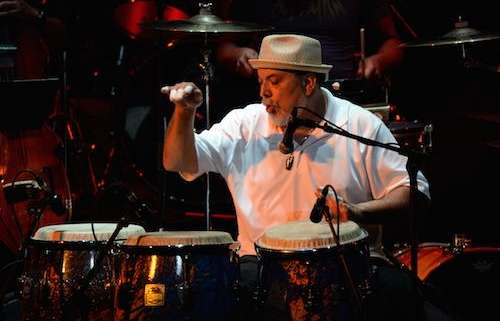 Growing up with 10 siblings in a Mexican-American family in Los Angeles, Poncho Sanchez had to work for everything he got starting from a young age. Music drew him from the time he was a small child, but percussion was not his first calling.

Sanchez, the youngest of 11 children, recalls admiring a neighbor’s shiny Fender guitar and his prowess when practicing in a Motown band, which was fairly new at the time.

“He’d let me touch the guitar but not too much because I was just the kid across the street. He sold me a little Spanish guitar with three strings for $.50. I got that and started plucking on it. I went to join a neighborhood band. Long story short, they said, ‘we don’t need a guitar player. We need a singer.’ I didn’t think I was a singer.”

But the young Sanchez surprised everyone … including himself.

“I think I sang a James Brown song. I started dancing around like James Brown. When the song was over, they said, ‘wow, you can sing and you can really move.’”

Fast forward more than 50 years, and Sanchez is still doing exactly that … as well as inspiring audiences all over the world to get up and get themselves moving.

Sanchez can thank his seven sisters for the dance moves. He and his siblings listened to late 1950s mamba and cha cha cha records incessantly as children, but while his sisters danced around the house, Sanchez would stare at the album covers and hone in on the deep rhythms of the songs.

“What attracted me to Latin percussion is the sound of the drum itself,” he says. “It was the flavor of them, or, as we say in Spanish, el sabor. I felt it, the rhythm, the flavor, the ‘unk-cha, chik-ah, chi-ka.” My sisters would dance and I would hear their feet shuffling on the floor. I’ve loved it as far back as I can remember.”

It wasn’t until high school that Sanchez landed his first conga drum, a pawnshop gift from his father. None of his friends or neighbors could guide him in Latin jazz, so he paved his own percussion sound with the help of multi-instrumentalist Cal Tjader, considered by many to be the king of Latin and acid jazz.

“I learned the trade of how to be a front man in a band. But all this time, I always liked the conga and the timbales,” he says. “I went home, put Cal Tjader’s records on and started to play. The sound of the instrument when I laid my hand down and learned how to slap it, felt right to me. It felt good on my hands.”

Sanchez led several local bands throughout his youth in Los Angeles. Then in 1975, Cal Tjader himself invited Sanchez on stage to perform with his band. The famed musician was so taken with Sanchez that he made him the official conguero in his band until Tjader passed away in 1982. Sanchez went on to take his fiery, gritty, danceable beats to front and center, producing nearly two dozen albums and winning a Grammy award.

“What can we tell people who come to the show? We’ll be playing lots of Latin jazz, salsa and a little Latin soul. They’re guaranteed to have a good time,” Sanchez says.

Latin jazz and salsa leader Poncho Sanchez and his nine-piece ensemble perform at the Jazz Tent at Lionshead’s Vail Square at 6 p.m. on Thursday, Aug. 22. Tickets are $25 for general admission, $40 for preferred seat and $50 for premium seat. Beer, wine and cocktails are available for purchase. Get tickets HERE. 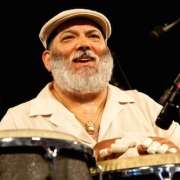