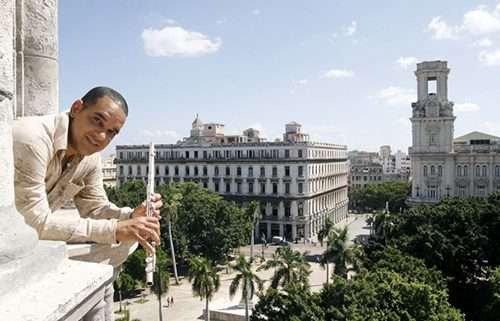 Join us August 18th, as Vail greets flutist Orlando “Maraca” Valle and his Latin Jazz All-Stars to Vail Jazz @ Vail Square starting at 6 pm. Performing with a seven piece band, you can already hear the exotic Latin beat of the congas and percussion, the warm sounds of salsa on the piano, the bright melodies of the trombone, groovy, fusion inspired bass lines, and the hot jazz sax making their way to Vail.

For over twenty years, Maraca and his Latin Jazz All-Stars have composed and arranged the authentic sounds and feelings from the Cuban culture. In 2003, Maraca received a Grammy nomination for Best Salsa Album with their album Tremenda Rumba, while also, topping the Billboard charts.

Having performed Afro-Cuban music in over 41 countries, the road has not been easy for this Cuban band. While politics have played a frustrating part in many Cuban musicians careers, as many Cuban bands have been restricted to travel and performing this rich music for fans abroad. However, Maraca continued to fight for Afro-Cuban music, and despite overwhelming visa and immigration laws, they encouraged listeners to not forget Cuban music and the Cuban people. In this time of turmoil, it was music that played a large part in bridging cultures together. It was musicians such as Maraca that started normalizing relations between countries, fighting for music to bring one another together.

Maraca’s music makes the listener feel intrigued and sparks conversation. With important messages and themes expressed in emotional vocals, this band practices what they preach, and have lived through incredible life experiences. Always giving a first class show, this band works extremely hard on stage to put on a spectacular show. Pouring their blood, sweat and tears into every salsa song.

Even today, Maraca plays with the traditional Cuban style and introduces contemporary harmonies and rhythms that sound energizing. Brining a little flair of Cuba to the audience, even here in Colorado! Music has truly shaped these musicians lives, and it’s evident as they perform with high enthusiasm night after night.

See you at the show! General Admission tickets are $20 and Premium tickets are $40, tickets can be purchased at https://www.vailjazz.org/events/maraca-latin-jazz-stars/

Celebrating the one and only Milt Hinton Scroll to top